THE creation of a new beach, breakwaters and leisure facilities is earmarked for Chlorakas in Paphos, and at a cost of around €4 million, is being hailed as the most ambitious and important project for the area in more than a decade. The project will hopefully get underway next year, according to officials.

The beach will also be the first ‘organised and safe area’ for locals and tourists to enjoy, according to the local community leader, Nikolas Liasidis

Although there are a couple of small beaches in Chlorakas, such as Sandy Beach and Vrexi, this stretch of coastline is prone to huge waves, dangerous currents and a rocky shoreline, meaning it’s not always suitable for swimmers, Liasidis told the Sunday Mail.

“It’s not easy to swim in Chlorakas and the project is a very important one for us as we don’t really have any safe beaches, although we have a beautiful 6km coastline”, he said. 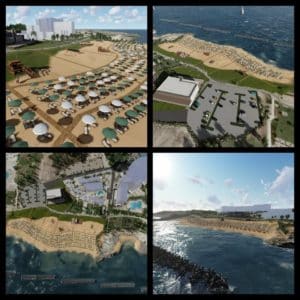 “We are a tourist area and it is dangerous to swim, this is no good and we need to create a safe beach as soon as possible. It will benefit us economically and also be good for tourists and locals too, for our quality of life.”

The proposed beach will be in the area known locally as Alitzi, running between the Saint George Hotel and the Laura Hotel.

“It will run from in front of the Laura and be around 500m along stopping next to St George.”

A spokesman for the Paphos Lifeguards association welcomed the news and said that Liasidis has their full support.

He noted that the Chlorakas coast was popular with overseas and local visitors as it was home to many hotels, hotel apartments and tourist complexes, and a new and safe beach would be a huge benefit.

“This is such a dangerous area with generally no safe place to swim and we have had drownings and serious incidents here in the past.  We are really pleased that the community leader is trying to do something and we are on hand for any advice needed,” he said.

He noted that although some of the hotels along the coast may employ their own lifeguards, none are from the state.

“The breakwaters created in from of the Venus hotel further along the coast have worked really well and this is now a safe place to swim. For Chlorakas, they are a good idea too,” he said.

The project consists of a number of stages.

Firstly, five breakwaters will be constructed in the sea to create a safe coastline for swimmers, said Liasides, noting that it’s proposed that the government will pay for up to 50 per cent of the cost and the remainder will come from the coffers of Chlorakas community council and the local hotels.

The local leader noted that the council has already secured all of the relevant licences, the final one was granted in May this year, which is from the environmental department.

“This was the last one and we are now ready to begin,” he said.

Chlorakas is a popular place to live and visit and also home to a large community of expats of all nationalities. According to the 2011 census, it has 5,356 inhabitants, and this number has grown in the last few years.

It has numerous churches, tavernas, cafes, a shipwreck, a couple of museums, an outdoor theatre and stunning views of the coast, but nowhere good to swim, say villagers.

“My family have lived here for years and love it. But we really do need a beach of our own, it will change our lives,” said resident Maria Demetriou.

The construction of new breakwaters is just one part of a three-point plan for the community board, explained Liasidis.

“The first point is the wave breakers, these are also important as it will help reclaim the sand to form a beach. This is our starting point.”

He added that the second point of the overall plan was to build a restaurant and a large beach bar at the new beach, which will be able to cater to the entire area.

The third was to create a new access road and a parking area, the design of which has already begun with the civil engineers, he said.

“It will be in Ayios Georgiou street and behind the Poseidon villas of Leptos.”

The Chlorakas community board has already rented a piece of Turkish Cypriot land from the relevant authority – this happened four years ago- to create a parking area, he said.

Also, there will be parking in front of the Laura Hotel water park.

“We will hold a tender process to see who will have the winning bids to secure the licences for the beach bar and the restaurant, these will be given to two different companies,” he said.

The community board is planning to operate the 150 or so sunbeds and umbrellas at the new beach, which will allow them to make a good income and earn some money back.

“We are hoping that the breakwaters will get underway at the end of 2019 and it will take at least two years to complete the project.”

The new, organised beach will have lifeguards on duty, and Liasidis is also committed to making disabled access easy. This will include a special chair and other equipment to help them in and out of the sea, he said.

“This is an important point for me, I want everyone to enjoy it.”

As the proposed area is a large one, there will also be beach volley courts, showers, changing rooms, toilets and other facilities.

Liasidis has three and a half years left as a community leader and is hoping to get the project completed in that time.

“It’s my main goal, I want to finish what I started. I will probably stand again. I know at 35 I am one of the youngest community leaders, I really care about where I live and the people’s quality of life.”

He added that he hoped the community board and hoteliers can reach an agreement with the government in 2018, so that plans can get underway at the end of next year.