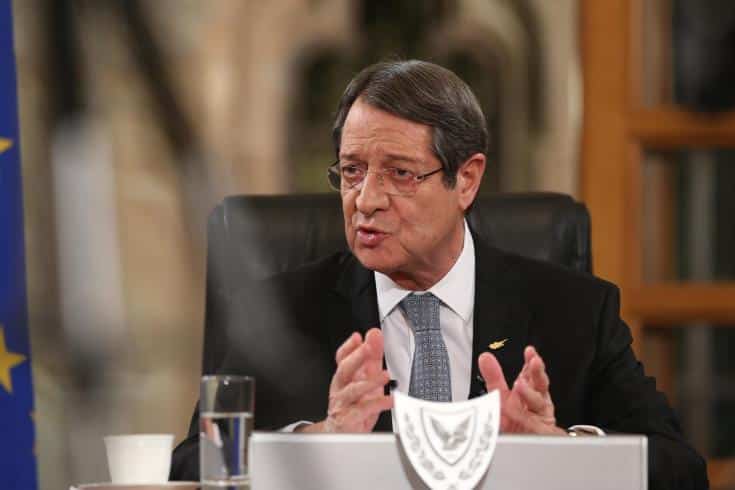 President Anastasiades promised Cypriot citizens that he will never stop working for the country`s progress and prosperity, noting that his vision encompasses the entire sovereign state of the Republic of Cyprus, through reaching a solution of the Cyprus problem.

In a televised address to mark the 58th anniversary of the Independence of Cyprus, President Anastasiades expressed his “feelings of appreciation, respect and pride for everything that we have collectively achieved throughout the years through the patience, the persistence and the diligence that characterise our people.”

At the same time, he paid tribute “to all those who sacrificed themselves or fought to rid our homeland from the colonial yoke,” and expressed the state`s gratitude “to all those who subsequently defended the Republic of Cyprus, lawfulness and democracy.”

“Our thoughts at this moment turn to the relatives of our missing persons and we assure them that we will continue our tireless efforts so that the fate of their loved ones is ascertained,” he stressed.

President Anastasiades also referred to the various interventions of the guarantor powers in the domestic affairs of the newly established state of the Republic of Cyprus, and the consequent intercommunal clashes, civil conflicts and the insidious coup that was used as a pretext for the brutal and illegal invasion by Turkey in 1974.

“It is an unacceptable situation,” he pointed out, “which deprives the citizens of the country, Greek Cypriots and Turkish Cypriots, the benefits of fundamental human rights enjoyed by the rest of the European citizens.”

According to President Anastasiades “it is well known that the Greek Cypriot side has accepted a painful but necessary compromise for the evolution of the Republic of Cyprus into a bizonal, bicomunal federation, always on the condition that all the people of Cyprus, Greek Cypriots and Turkish Cypriots, will enjoy the same basic freedoms and human rights provided by the very Constitution of the Republic of Cyprus.”

He continued expressing his view that “the solution of the Cyprus problem is attainable if our Turkish Cypriot compatriots also realise that what will free both them and us from the tragic situation we are experiencing, is the establishment of a truly independent State that will respect and implement the European acquis, and will recognise and honour the rights of every Cypriot citizen, as in any other democratic country.”

Nicos Anastasiades also explained that in his recent meeting with UN Secretary General Antonio Guterres he “reiterated the clear will and absolute readiness of our side for the immediate resumption of the negotiations based on the UN resolutions, the principles of the European Union, the convergences achieved so far, as well as the framework of the six parameters set by the UN Secretary General himself in Crans-Montana.”

President Anastasiades further noted that in addition to the effort to achieve a solution to the Cyprus problem acceptable by everybody, “we are determined to respond to the historical challenge and responsibility and we will do whatever is possible to create conditions of peace and security for all Cypriots, through a multifaceted foreign policy which will render Cyprus a pillar of stability and peace.”

He assured that he will never cease working “decisively for the progress and wellbeing of our country,” and for the realisation of “this vision, which concerns the entire sovereign state of the Republic of Cyprus, through reaching a solution to the Cyprus problem which will be fully compatible with the High Level Agreements, the unanimous decisions of the National Council, the decisions and resolutions of the United Nations, and, first and foremost, be fully compatible with the European principles and values.”

President Anastasiades underlined that “only in this way we will secure conditions of lasting peace for all the legal citizens of the Republic of Cyprus without any exception.”