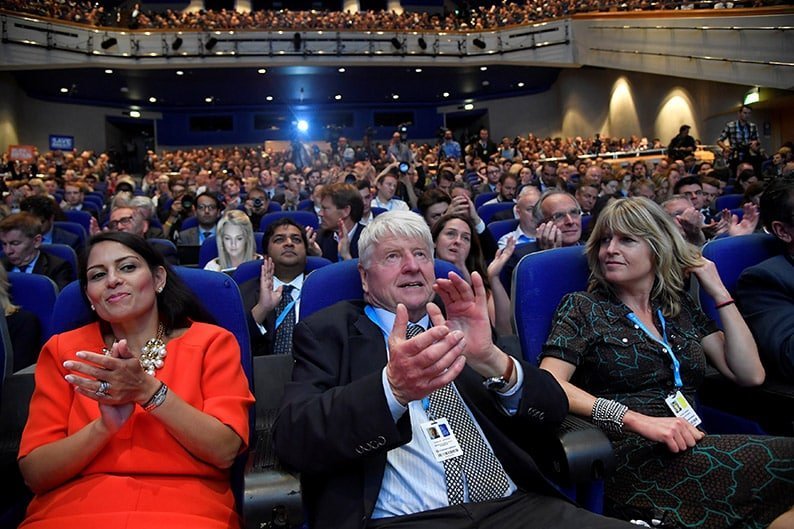 Boris Johnson's father Stanley Johnson, his sister Rachel Johnson and Conservative MP Priti Patel, along with other delegates, listen to Boris Johnson speaking at a Conservative Home fringe meeting on the third day of the Conservative Party Conference in Birmingham

Former British foreign minister Boris Johnson made what was seen as a blatant pitch to replace Prime Minister Theresa May as Conservative leader on Tuesday, damning her Brexit plans while calling for his party to regain its confidence.

In a speech which delighted an audience at the Conservative Party conference, Johnson called for no new taxes and extra health service spending whilst the room erupted into cheers when he said May needed “to chuck Chequers”, as her Brexit proposals are known.

With just six months before Britain leaves the European Union, May’s precarious position at the helm of her party has been further shaken by criticism of her plans, both at home and in Brussels.

Johnson, who became the figurehead for the campaign to leave the EU, has been one of her loudest critics.

“Do not believe them when they say there is no other plan and no alternative,” Johnson told the hundreds of Conservatives who queued to get a seat in a 1,500-seat conference hall.

“This is the moment to chuck Chequers,” he said. “If we cheat the electorate, and Chequers is a cheat, we will escalate that sense of mistrust.”

May has shown little sign of moving away from her so-called Chequers plan, but after trying to display unity over Brexit at her party’s annual conference in the city of Birmingham, Johnson looked to have shattered those attempts.

“Turns out there is a plan. That plan is Boris,” Conservative lawmaker James Duddridge tweeted.

The BBC’s Political Editor Laura Kuenssberg wrote on Twitter: “This is what we would euphemistically call a ‘wide ranging speech’ – a blatant pitch for leadership by Johnson, right in heart of conference where May meant to be in charge.”

Johnson made no open suggestion he would challenge May, saying the party must back one of May’s earlier Brexit plans which he says she has ditched, and said one of the few predictions the Treasury department had got right was that he would not be prime minister.

While Johnson’s Brexit message was greeted with the greatest rapture, his attack on the opposition Labour Party and calls for the Conservatives return to its traditional values of low tax and strong policing were also enthusiastically received.

He also namechecked Margaret Thatcher, the Conservative prime minister from 1979 to 1990 who remains a hero to many in the party, and said it was a disgrace that no banker had been jailed after the 2008 financial crash.

May, when asked in a series of broadcast interviews earlier about Johnson’s expected intervention, said she had expected his speech would be a “lively” event but declined to make any personal criticism.

May’s team had hoped the party’s annual conference would hand her a platform to revitalise a pledge she made when she became prime minister in 2016 to help those people who are “just about managing” and try to steal the initiative from Labour.

But the conference has been dominated by Brexit, with eurosceptic lawmakers attracting hundreds of Conservative members to their events on the fringes. Only handfuls turned out to hear ministers’ speeches in the main hall.

Debenhams appoints advisers to draw up plans for possible liquidation

Pope calls for dialogue between Egypt, Ethiopia and Sudan over Nile dam