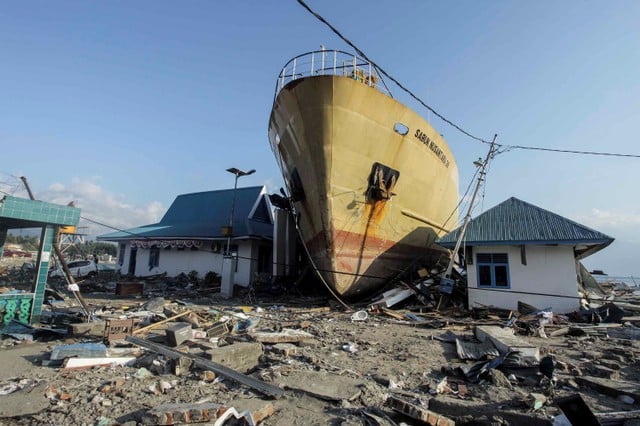 A ship is seen stranded on the shore after an earthquake and tsunami hit the area in Wani, Donggala, Central Sulawesi, Indonesia October 1, 2018 in this photo taken by Antara Foto. Antara Foto/Muhammad Adimaja/ via REUTERS ATTENTION EDITORS - THIS IMAGE WAS PROVIDED BY A THIRD PARTY. MANDATORY CREDIT. INDONESIA OUT. TPX IMAGES OF THE DAY

The extent of the devastation caused by an earthquake and tsunami on the Indonesian island of Sulawesi should become clearer on Tuesday as rescuers push into remote areas that have been out of contact for more than three days.

Officials fear the death toll will rise into the thousands but the number of confirmed deaths stood at 844 on Tuesday, most of them in the small city of Palu, 1,500 km (930 miles) northeast of Jakarta.

Some of the dead were taken to a mass grave on Tuesday while rescuers hunting for victims in the ruins held out hope they could still save lives.

“We suspect there are still some survivors trapped inside,” the head of on rescue team, Agus Haryono, told Reuters at the collapsed seven-storey Hotel Roa Roa.

About 50 people were believed to have been caught inside the hotel when it was brought down by the 7.5 magnitude earthquake on Friday.

The quake triggered tsunami waves as high as six metres (20 feet) that smashed into the city’s beachfront, about 2 km from the hotel. About 12 people have been recovered from the ruins of the hotel, with one more body on Tuesday.

Three of the victims were recovered alive.

Haryono pored over the hotel’s blueprints and building plans, searching for possible pockets and a way through to them. A faint smell of decomposition hung in the air.

“We have to be very careful so we don’t risk hurting any survivors when we move the debris,” he said.

Power has yet to be restored in the area and access by land to outlying villages has been disrupted by broken roads, landslides and downed bridges.

Nearly 60,000 people have been displaced and are in need of emergency help, while thousands have been streaming out of stricken areas.

There was mounting concern over Donggala, a region of 300,000 people north of Palu and close to the epicentre, and two other districts. The three areas have a combined population of about 1.4 million.

Indonesia has said it would accept offers of international aid, having shunned outside help earlier this year when an earthquake struck the island of Lombok.

A particular horror in several areas in and around Palu was liquefaction, which happens when soil shaken by an earthquake behaves like a liquid.

About 1,700 houses in one neighbourhood were swallowed up, with hundreds of people believed buried, the national disaster agency said.

Among those killed in the area were 34 children at a Christian bible study camp, a Red Cross official said.

Elsewhere on the outskirts of Palu, lorries brought 35 bodies for burial in a mass grave dug in sandy soil.

Most of the bodies had not been claimed, a policemen helping with the burial said, but some relatives turned up to pay respects to loved ones at the 50 metre (165 feet) trench, where the smell of decomposition was overpowering.

“I have nothing now. My house is destroyed and I can’t even give him his own funeral,” said Rosmawati Binti Yahya, 52, whose husband was among those placed in the grave.

“It’s OK if he’s buried in the mass grave, it’s better to have him buried fast,” said Yahya, before heading off to look for her missing daughter.

As rescuers and aid workers fanned out into remote areas, the Red Cross said initial reports from the outskirts of Donggala district were chilling.

“The situation in the affected areas is nightmarish,” Jan Gelfand, head of an International Federation of Red Cross and Red Crescent Societies office in Jakarta, said in a statement.

“The city of Palu has been devastated and first reports out of Donggala indicate that it has also been hit extremely hard.”

Commercial airlines have struggled to restore operations at Palu’s quake-damaged airport but military aircraft took some survivors out on Monday, while about 3,000 people thronged the airport hoping for any flight out.

A navy vessel capable of taking 1,000 people at a time was due to be deployed to help with the evacuation.

The power company was working to restore electricity while the state oil firm had sent in fuel, officials said.

Teams of police were out on the streets on Tuesday, clearing debris and providing some reassurance to traumatized residents worried about looting.

But anger has been simmering.

“Stop hiding Mr Mayor,” was daubed on a wall in one part of Palu. Mayor Hidayat was unavailable for comment.

New 6.2 quake hits near Flores in Indonesia
An earthquake with a preliminary magnitude of 6.2 was recorded near the southern Indonesian island of Flores, the U.S. Geological Survey said on Tuesday, four days after a devastating quake on Sulawesi island killed at least 844 people.

The quake, which hit about 250 km (155 miles) southwest of Ende on Flores, was later downgraded by the USGS to a magnitude of 5.9. There were no immediate tsunami alerts or reports of casualties or damage.

President Anastasiades: I will always work for the country’s progress and prosperity