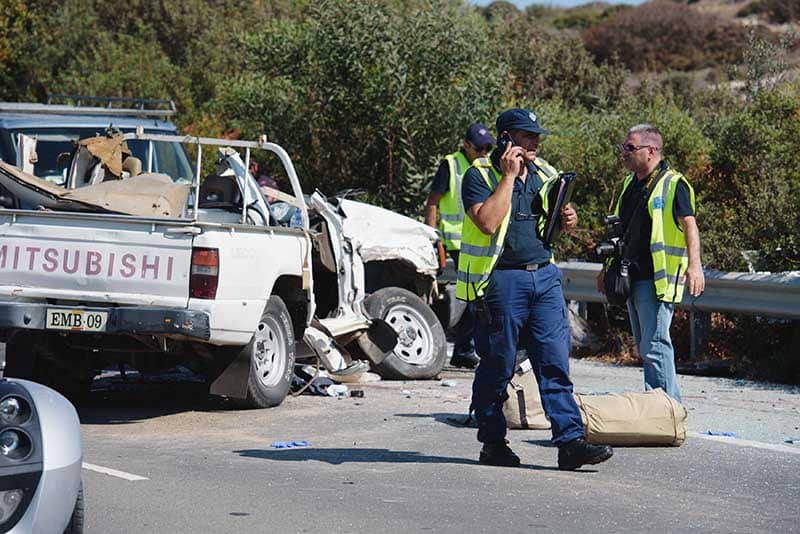 Two people were killed and two others were injured on Tuesday after a pick-up truck smashed into the back of a lorry on the Nicosia-Limassol motorway, causing a massive traffic jam.

A taxi was driving behind the lorry in the left lane at approximately 1pm when one of the latter vehicle’s axels broke, causing the taxi to swerve into the right lane.

The pick-up, being driven by a 36-year-old Egyptian man and permanent resident of Cyprus, was in the right lane, and was hit by the taxi, causing it to swerve, spin out of control and violently crash into the back of the lorry, police said.

The man had just picked up three other Egyptians, who came to the island for work, from the airport and was heading back to Limassol.

Driver Νabil Μekhail Υousef Salib and one passenger, 24-year-old Κirollos Sobhy Νagies Αbaskhroun, were killed in the accident, while the other two were injured. One of the injured is in critical condition at Limassol hospital and is being treated in intensive care. The other injured man, police said, is in serious but stable condition.

The lorry straddled both lanes of the highway, causing a traffic jam to build up on the road that lasted for hours.

People posted images and expressed their frustration on social media.

Police said that the accident took up approximately half a kilometre of the highway and that another axel had to be brought in with tyres for the lorry to be moved.

According to traffic police spokesperson Harris Evripidou initial investigations showed that the four individuals in the pick-up had not been wearing seat belts.

Police said that an officer for the police’s engineering department arrived at the scene to conduct an examination on the lorry and file a report on the vehicle’s condition.

Head of traffic police in Limassol Michalis Michael said: “Checks are conducted on these types of vehicles in cooperation with officials of the Road Transport Department, and these types of lorries are given a mechanical check once a year by the department.”

He added that the lorries undergo checks to their engines, tyres and other parts.

Asked by CyBC about the traffic jam that followed the accident, Michael said that there was a plan B in place and that cars were diverted to the coastal road.

He added that the area was cleared by 7pm and that traffic conditions had returned to normal.

In the meantime, on Tuesday night another lorry caught fire on the Limassol-Paphos highway causing police to close that motorway.

The vehicle caught fire near Pissouri, and police closed the highway from the Avdimou exit until the Pissouri exit.

No injuries were reported, and the vehicle is reported to have caught fire after it overheated.

Traffic was diverted to the old Limassol-Paphos road coastal road.

On Monday a week-long road safety campaign was launched by authorities to make sure people were wearing their seat belts.

This is the sixth campaign so far this year aimed at reducing the number of injuries and deaths in traffic accidents.

The aim of the campaign is to increase awareness of why seatbelts must be worn in both the front and back of all cars and why children are safer in car seats.