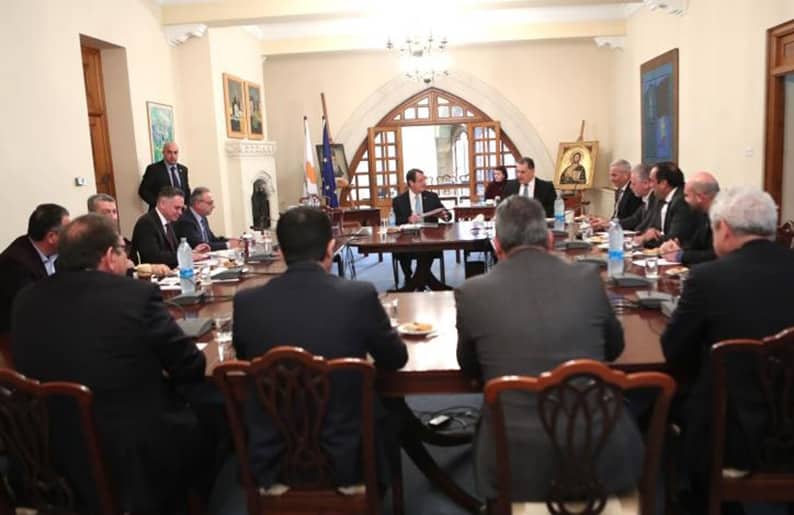 President Nicos Anastasiades will brief the political party leaders next week on his contacts in New York, it emerged on Wednesday.
He will inform the leaders of his meeting with UN Secretary-General Antonio Guterres and other contacts he had on the sidelines of the UN General Assembly.

Anastasiades, both in his meeting with Guterres and his other contacts, including a lunch with the ambassadors of the five permanent members of the Security Council, reiterated his readiness for a new round of Cyprus talks based on the Guterres framework.

The UN Secretary-General is awaiting the report of his envoy Jane Holl Lute following her contacts with all the parties before deciding on his next move as regards Cyprus and before submitting his own report on his Good Offices Mission by mid-October to the Security Council.

He also revealed on Phileleftheros radio Active on Wednesday that Anastasiades had spoken to Turkish Cypriot leader Mustafa Akinci by phone while they were both in New York.

He also said Turkish Cypriot dependence on Turkey could only end with a Cyprus solution.

“It is positive that these efforts are continuing. I believe that at the end of the week we will complete our contacts and based on the results, we will see how the dialogue will resume,” he was quoted as saying.

However, he said it had not gone unnoticed that while in New York, Turkish President Tayyip Erdogan and his Foreign Minister Mevlut Cavusoglu had chosen to meet Turkish Cypriot ‘foreign minister’ Kudret Ozersay rather than Akinci, who Christodoulides said appeared to be taking a different approach.

Akinci last Friday, when he met the UN chief said there could be no solution outside UN parameters.