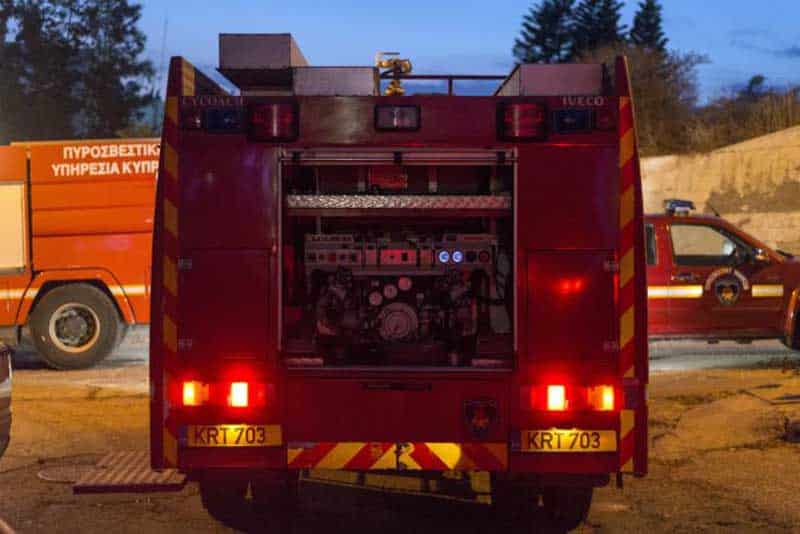 The fire service responded to a number of calls in the 24 hours up until Wednesday morning, they announced.

In total, from 6am on Tuesday until 6am on Wednesday, the fire service responded to a total of 30 calls for help, 15 fires, 12 special services and three false calls.

Early Tuesday they were called a house fire at around 9:20am in Lemonas village in Paphos, a call around the same time involving an injury of a building worker, a deadly crash around noon time in the Limassol to Nicosia highway and a fire in a vehicle at around 7:45pm in Larnaca.

Regarding the first incident, the owner of the house, a 73-year-old woman, had started a small fire using wood in her garden, but the fire managed to spread to a metallic shed that contained various agricultural tools.

After the use of two fire trucks and breathing devices, the fire service managed to control the blaze by 10:30am.

The woman was taken to Paphos hospital for burn treatment.

The second incident involved a Turkish Cypriot builder who was working on a site in Strovolos where he accidentally fell into a lift shaft which was two metres deep, injuring various parts of his body.

The rescue team of the fire service and an ambulance crew assisted in the transfer of the man to the Nicosia hospital. The department of labour inspection and police were also called to the scene to investigate.

In the third incident, a pick-up truck smashed into the back of a lorry on the Nicosia to Limassol highway, killing two people and injuring another two.

The pick-up, being driven by a 36-year-old Egyptian man and permanent resident of Cyprus, was in the right lane, and was hit by the taxi, causing it to swerve, spin out of control and violently crash into the back of the lorry, police said.

The man had just picked up three other Egyptians, who came to the island for work, from the airport and was heading back to Limassol.

In the last incident, the fire service responded to a call at around 7:45pm that a vehicle was on fire while parked in Kamares in Larnaca. Two fire tucks were used in the tackling of the blaze and the fire was under control by 7:53pm. The vehicle had sustained extensive damage. At first glance, the service said that the fire had started due to a leaking petrol fluid.

Going back to his artistic roots

News podcast: Bill for local authority reform can go to vote in autumn

75-year-old sought over hit and run and knife threat

House to vote on supplementary budget