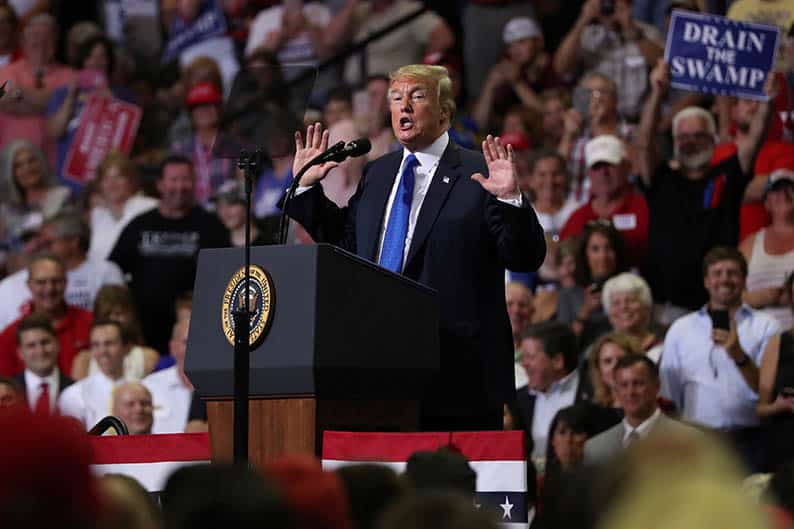 Two moderate Republicans who could be pivotal in determining whether the Senate confirms US Supreme Court nominee Brett Kavanaugh criticised President Donald Trump on Wednesday for mocking a woman who has accused the judge of sexual assault.

Senators Jeff Flake and Susan Collins were among the lawmakers who took issue with comments Trump made regarding Christine Blasey Ford, a university professor from California who detailed her sexual assault allegation against Kavanaugh at an extraordinary Senate Judiciary Committee hearing last week.

At a political rally in Mississippi on Tuesday night, Trump mocked Ford’s testimony about the alleged assault in Maryland in 1982 when she was 15 and Kavanaugh was 17.

Ford testified that she could not remember the precise date or location of the alleged assault or how she got home afterwards, but offered a detailed account of the incident itself in which she said a drunken Kavanaugh pinned her down, tried to remove her clothing and covered her mouth when she screamed.

“What neighbourhood was it in? I don’t know. Where’s the house? I don’t know. Upstairs, downstairs, where was it? I don’t know. But I had one beer. That’s the only thing I remember,” Trump, who was himself accused during the 2016 presidential race of sexual misconduct with numerous women, said in his imitation of Ford’s testimony.

“And a man’s life is in tatters,” Trump added.

Appearing on NBC’s “Today” show, Flake said that “there’s no time and no place for remarks like that, that discuss something this sensitive at a political rally.”

“It’s just not right. I wish he hadn’t … done it. I just say it’s kind of appalling,” Flake said of Trump’s comments.

Speaking briefly to reporters, Collins said, “The president’s comments were just plain wrong.” She did not respond when asked if his comments would affect her vote on Kavanaugh’s confirmation.

Trump’s fellow Republicans control the Senate by a 51-49 margin. That means if all the Democrats vote against Kavanaugh, Trump could not afford to have more than one Republican oppose his nominee, with Vice President Mike Pence casting a tie-breaking vote.

So far, no Republicans have said they would vote against Kavanaugh.

Flake was instrumental in initiating an FBI investigation into the allegations against Kavanaugh, a conservative federal appeals court judge nominated by Trump for a lifetime job on the top US court. Kavanaugh has denied Ford’s accusation as well as allegations by two other women, all dating from the 1980s.

Trump ordered the FBI investigation last Friday, limiting its duration to no more than a week.

In a Twitter post on Wednesday, Trump did not back away from his comments at the rally, instead attacking Kavanaugh’s Democratic critics. Writing in all capital letters, Trump said when he goes to political rallies, which are organized by Republicans, he sees that voters are angry at the “vicious and despicable” way Democrats are treating his nominee.

The White House defended Trump’s remarks. White House adviser Kellyanne Conway told Fox News that “the president is pointing out factual inconsistencies. By Ford’s own testimony, there are gaps in her memory. There are facts that she cannot remember: how she got home, how she got there, where the house was, what the date was.”

Senate Majority Leader Mitch McConnell has said the Senate will vote on Kavanaugh’s confirmation this week after each senator is given a report on the ongoing FBI investigation.

The fight over Kavanaugh’s nomination comes against the backdrop of the #MeToo movement fighting sexual harassment and assault that has toppled a succession of powerful men. Voters will be casting ballots in Nov. 6 elections in which Democrats are trying to seize control of Congress from Trump’s party.

“We will not be intimidated by these people,” McConnell said. “This is all part of the organized effort to delay, obstruct and intimidate, including those of us who will be voting this week.”

Several people with information related to the allegations against Kavanaugh have said they have tried in vain to speak with the FBI, which is due to wrap up its investigation this week.

The FBI has already interviewed Mark Judge, a friend of Kavanaugh, as well as at least three other people with information about the allegations made by Ford and a second accuser, Deborah Ramirez. Judge, identified by Ford as a witness to the alleged assault, has denied any memory of such an incident.

Ramirez has said Kavanaugh exposed himself to her when they both attended Yale University.

Ford’s lawyers said on Tuesday she has offered her full cooperation with the FBI but received no reply.

Police called to Turkish cleric’s US compound after shot fired