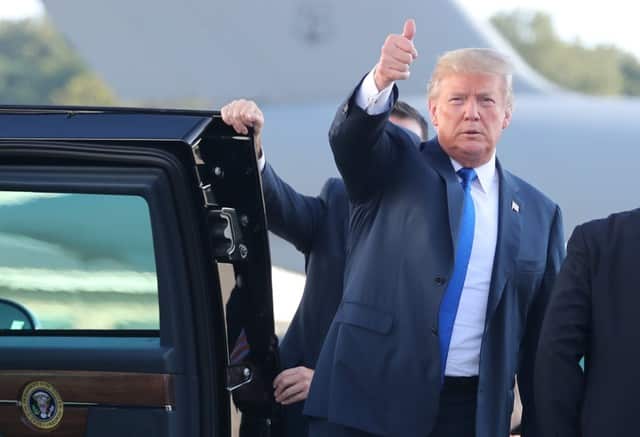 Unlike other White House candidates and presidents in recent decades, Trump has declined to release his tax returns

U.S. President Donald Trump engaged in tax schemes that included cases of fraud in which he and his siblings helped their parents dodge millions of dollars in taxes, the New York Times reported on Tuesday.

The Times investigation, which the White House said was “misleading,” showed Trump received the equivalent today of at least $413 million from his father’s real estate business.

The Times, citing a “vast trove” of confidential tax returns and financial records, reported that much of that fortune came to Trump because he helped his parents evade taxes, setting up a fake corporation with his siblings to disguise millions of dollars in gifts from their parents.

Trump promoted himself during his presidential campaign as a self-made real estate mogul who started out with only a “very small” loan from his businessman father, Fred Trump.

Reuters has not been able to verify the report.

White House spokeswoman Sarah Sanders called the story “misleading” and said in a statement “many decades ago the IRS reviewed and signed off on these transactions.”

“The affairs were handled by other Trump family members who were not experts themselves and therefore relied entirely upon the aforementioned licensed professionals to ensure full compliance with the law,” Harder said.

New York City Mayor Bill de Blasio said on Twitter late on Tuesday: “I’ve directed NYC’s Department of Finance to immediately investigate tax and housing violations and to work with NY State to find out if appropriate taxes were paid.”

James Gazzale, a spokesman for the New York State Department of Taxation and Finance, said earlier the department “is reviewing the allegations in the New York Times article and is vigorously pursuing all appropriate avenues of investigation.”

The U.S. Internal Revenue Service did not reply immediately to a request for comment.

The Times, citing tax experts, reported it was unlikely Trump would face criminal prosecution because the acts were past the statute of limitations. There is no time limit, however, on civil fines for tax fraud, according to the paper.

It reported that its findings were based on more than 200 tax returns from Fred Trump, his companies and various Trump partnerships and trusts.

The records did not include Donald Trump’s personal tax returns. Unlike other White House candidates and presidents in recent decades, Trump has declined to release his tax returns.

The Times said the report was also based on interviews with Fred Trump’s former employees and advisers and more than 100,000 pages of documents describing the inner workings of his business empire.