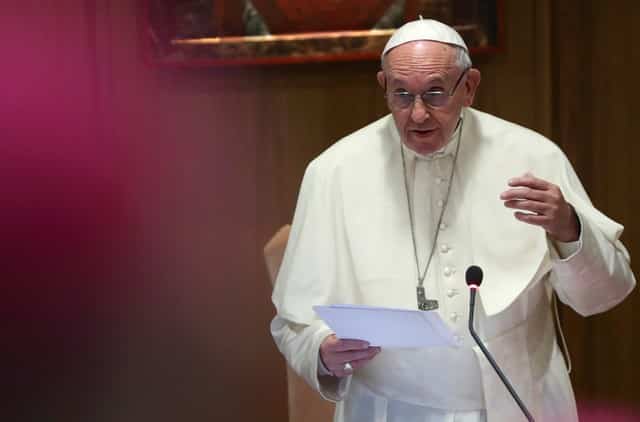 Pope Francis speaks during a synodal meeting at the Vatican

Pope Francis opened a gathering of bishops on Wednesday at a time of crisis in the Catholic Church over sex abuse, with one bishop boycotting the meeting and another staying home to deal with the fallout from the scandal.

Though the synod’s official title is “Young People, Faith and Vocational Discernment,” the worldwide sexual abuse scandal looms large in the background and many believed it would be part of the informal agenda in the discussions.

At an opening Mass in St. Peter’s Square, the pope urged Church leaders not to let the next generation’s faith be snuffed out “by our own shortcomings, mistakes and sins”.

In signs of the extraordinary pressure the Church has come under from the scandal, Archbishop Charles Chaput of Philadelphia had called for the synod to be scrapped so the Vatican could concentrate on preparing another bishops’ meeting on preventing sex abuse.

More than 250 other bishops from around the world are taking part in the month-long meeting with about 40 young people invited to take part as observers.

Two of the bishops are from China, a first following the Vatican’s landmark agreement earlier this month that improved ties with the Communist government. Applause broke out as the pope noted their presence in his homily of the Mass, attended by tens of thousands of people.

The Church is enmeshed in sexual abuse crises in countries including Chile, Germany, the United States and Australia, and the Vatican knows it has to win back disenchanted young people.

The synod began a day after a new Pew Research Center survey found that confidence in the way the pope is handling the sexual abuse crisis has dwindled among American Catholics.

While seven-in-ten American Catholics said the overall opinion of the pope was favourable, six-in-ten said Francis was doing an “only fair” or “poor” job handling the abuse scandal, nearly double the figure at the beginning of 2018.

Later, in a speech at the first working session, Francis said he hoped the synod, which will result in a papal document, would “awaken our hearts” because the Church today was laden with “struggles, problems, burdens”.

He attacked clericalism, which he defined as a view that priests and bishops are the elite who exercise power but he branded as “the root of many evils in the Church”.

Instead, he said, they should be humble and offer “free and generous service” to the faithful.

Police called to Turkish cleric’s US compound after shot fired