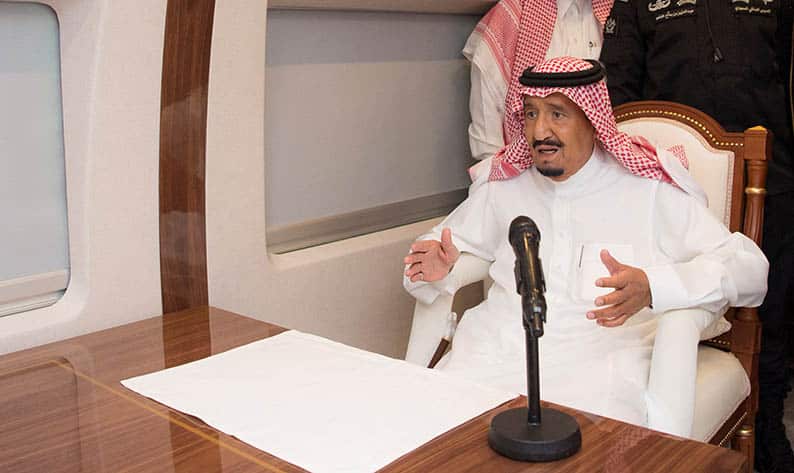 US president Donald Trump has said Saudi Arabia’s King Salman “might not be there for two weeks” without US military support.

Mr Trump is seeking to put pressure on the close American ally over rising oil prices.

Speaking at a campaign rally in Mississippi, Mr Trump said: “I love the king, King Salman, but I said: ‘King, we’re protecting you. You might not be there for two weeks without us. You have to pay for your military, you have to pay.'”

Mr Trump did not elaborate on when he spoke to the Saudi monarch. Mr Trump and Salman last shared a reported telephone call on Saturday.

Benchmark Brent crude oil prices are close to 85 dollars a barrel – a four-year high – and analysts say it could reach 100 dollars. US petrol prices have gone up ahead of November mid-term elections.

Mr Trump and Salman discussed “efforts to maintain supplies to ensure the stability of the oil market and ensure the growth of the global economy” in their phone call at the weekend, according to the state-run Saudi Press Agency.

There was no immediate reaction in Saudi Arabia to Mr Trump’s remarks. Riyadh has worked to cultivate warm relations with the US president after having rocky moments with his predecessor, Barack Obama.

The US administration – and in particular his son-in-law Jared Kushner – has sought a close relationship with King Salman’s son Mohammed bin Salman, the country’s crown price and next in line to the throne in the Al Saud monarchy.

But oil prices seem to be getting in the way. In July, Mr Trump tweeted without evidence that Saudi Arabia would increase its production “maybe up to 2,000,000 barrels” a day.

Meanwhile, US fuel prices are up ahead of November mid-term elections in which Mr Trump already faces considerable political headwinds. The average price for a gallon of petrol in the US is 2.88 dollars (£2.21), up from 2.55 dollars (£1.96) a year ago.

He said: “Opec and Opec nations are, as usual, ripping off the rest of the world, and I don’t like it. Nobody should like it.

“We defend many of these nations for nothing, and then they take advantage of us by giving us high oil prices. Not good.

Concerns over condition of artefacts stored in Kyrenia castle