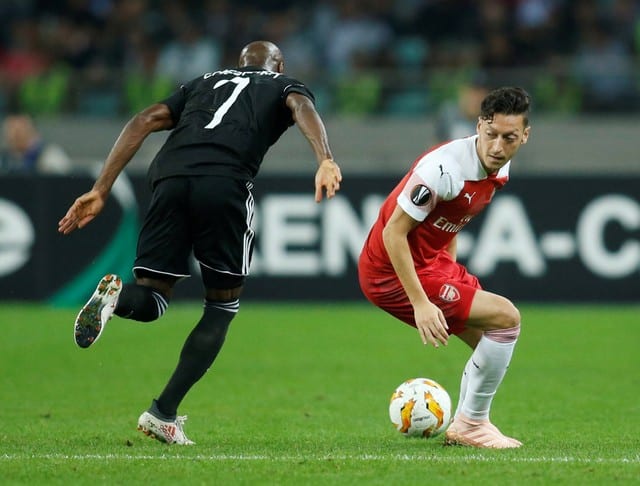 Arsenal eased to Europa League victory against Qarabag on Thursday night – but they were far from their best in Baku.

Sokratis Papastathopoulos opened the scoring early on before the visitors had to withstand plenty of pressure until Emile Smith Rowe’s first senior goal and a first for club for Matteo Guendouzi secured a 3-0 win which flattered Unai Emery’s side.

The Arsenal head coach opted to bring the likes of Mesut Ozil, Alexandre Lacazette and Granit Xhaka on a near 5,000-mile round-trip despite a tricky visit to Fulham early on Sunday – but they were named on a strong bench at the Baku Olympic Stadium.

But they held their own for much of a contest in which they were equal to an Arsenal side showing nine changes from the weekend win over Watford.

The Gunners were on the front foot immediately as fit-again Sead Kolasinac’s low cross was contested by Qarabag goalkeeper Vagner and Danny Welbeck, with the loose ball breaking for Mohamed Elneny, whose low shot was blocked behind for a corner.

The Egypt international took the resulting set-piece, with Sokratis turning home his first Arsenal goal from close range following Nacho Monreal’s initial header – although he appeared to know little about it.

A flowing move forward should have resulted in a second for the visitors but Smith Rowe, making his first European start for the club, failed to turn in Kolasinac’s cross at the back post.

Emery had set up with a back three and they were tested on a couple of occasions in the first half, especially as Mahir Madatov danced past Kolasinac and got a shot away which Bernd Leno did well to keep out.

The German goalkeeper was on hand again soon after to keep out a strike from the lively Filip Ozobic.

Emery introduced one of his key men, Lucas Torreira, at the start of the second half as he abandoned his three-man defence with the withdrawal of Monreal.

But Qarabag were still threatening and Madatov finished coolly past Leno, only to have the goal rightly ruled out for offside.

Arsenal heeded their warnings and doubled their lead moments later as Alex Iwobi fed Smith Rowe and the 18-year-old slotted in his first senior goal with aplomb.

Despite a two-goal cushion, Emery felt the need to introduce both Ozil and Lacazette from the bench as the second half wore on.

The game was killed off by Guendouzi’s fine finish 11 minutes from the end, a goal which added gloss to the scoreline and was harsh on a spirited Qarabag outfit.

But it also secured an eighth consecutive win in all competitions for Emery’s men and means they can take control of Group E with victory at Sporting Lisbon later this month.

Apollon fight back to earn a point against Marseille