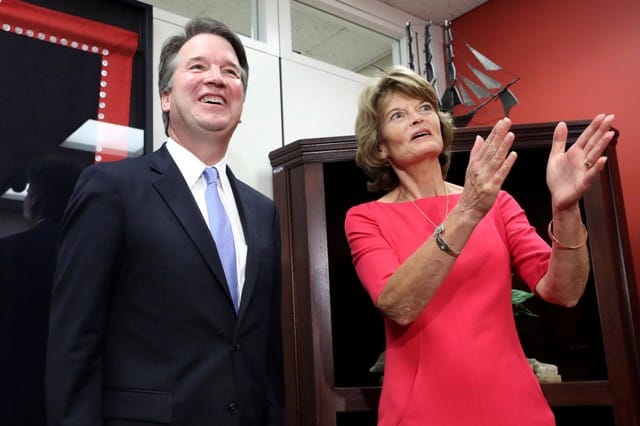 President Donald Trump on Thursday rejected Democratic criticism of the White House’s handling of an FBI probe into sexual misconduct accusations against his Supreme Court nominee, Brett Kavanaugh, as Senate Republicans maneuvered to confirm the conservative judge within days.

The White House sent the FBI report to the Senate Judiciary Committee early on Thursday, and senators in both parties were poring over it behind closed doors to determine whether it resolved concerns raised about the nominee.

Trump, pushing the Senate to confirm Kavanaugh to a lifetime job on the top U.S. court, said on Twitter after the FBI finished its investigation that the allegations against his nominee were “totally uncorroborated.”

Democrats complained that the FBI probe, ordered by Trump last week at the request of Republican Senator Jeff Flake and others, was too narrow in scope and left out critical witnesses.

Democratic Senator Dianne Feinstein said it appeared that the White House “blocked the FBI from doing its job.”

“Democrats agreed that the investigation’s scope should be limited. We did not agree that the White House should tie the FBI’s hands,” she said.

“The most notable part of this report is what’s not in it,” Feinstein said, noting that the FBI did not interview Kavanaugh himself or Christine Blasey Ford, the university professor who has accused Kavanaugh of sexual assault in 1982.

The confirmation process was already deeply partisan given that Kavanaugh would deepen conservative control of the Supreme Court, and Democrats have fought his nomination from the outset. It became an intense political drama when three women emerged to accuse Kavanaugh of sexual misconduct in the 1980s when he was in high school and college.

Kavanaugh, a federal appeals court judge, has denied the accusations. Trump’s fellow Republicans have stood by the judge, and the party leadership said on Thursday the FBI report had not changed their view of Kavanaugh’s fitness for the job.

Chuck Schumer, the top Senate Democrat, said the report confirmed Democratic fears that “this was a very limited process that would constrain the FBI from getting all the facts.”

Republicans expressed growing confidence that Kavanaugh would be confirmed by the Senate after a political battle that has riveted Americans weeks before Nov. 6 elections in which Democrats are trying to take control of Congress from the Republicans.

A senior Senate Republican aide said there was growing confidence that Republican Senators Susan Collins and Flake and Democratic Senator Joe Manchin – all swing votes – would support Kavanaugh. If so, that could be enough for a Trump victory in this battle. Republican Senator Lisa Murkowski is another swing vote who has been heavily lobbied in Alaska to oppose Kavanaugh.

Trump’s fellow Republicans control the Senate by a 51-49 margin. If all the Democrats oppose Kavanaugh, Trump cannot afford to lose the support of more than one Republican for his nominee, with Vice President Mike Pence casting a tiebreaking vote. No Republicans have said they will vote against Kavanaugh.

After the report’s release, Collins said the investigation appeared to be thorough and Flake said he saw no additional corroborating information against Kavanaugh.

Late on Wednesday, Senate Majority Leader Mitch McConnell took steps to hold a key procedural vote as early as Friday, which could pave the way for a final vote on Kavanaugh’s confirmation by the weekend.

“When the noise fades, when the uncorroborated mud washes away, what’s left is the distinguished nominee who stands before us. An acclaimed judge,” McConnell said on the Senate floor after the report’s release.

“There’s nothing in it that we didn’t already know. These uncorroborated accusations have been unequivocally and repeatedly rejected by Judge Kavanaugh, and neither the Judiciary Committee nor the FBI could locate any third parties who can attest to any of the allegations.”

The White House believes the FBI report addressed the Senate’s questions about Kavanaugh, Shah told CNN, adding that the FBI reached out to 10 people in its investigation and “comprehensively interviewed” nine of them.

“The White House didn’t micromanage the FBI. … It’s been sent to the Senate, no White House editing,” Shah said.

Trump said on Twitter the investigation was the seventh by the FBI into Kavanaugh’s background, adding, “If we made it 100, it would still not be good enough for the Obstructionist Democrats.”

Attorneys for Deborah Ramirez, who also has accused the judge of sexual misconduct in the 1980s, wrote a letter to FBI Director Christopher Wray saying they were “deeply disappointed” that agents had not followed up on their interview with her by talking to the more than 20 witnesses she identified as being able to corroborate her account of his behavior.

Ford, who testified last week at a dramatic Judiciary Committee hearing, accused Kavanaugh of pinning her down, trying to remove his clothing and covering her mouth when she screamed. He denied the allegation and painted himself as the victim of a “political hit.”