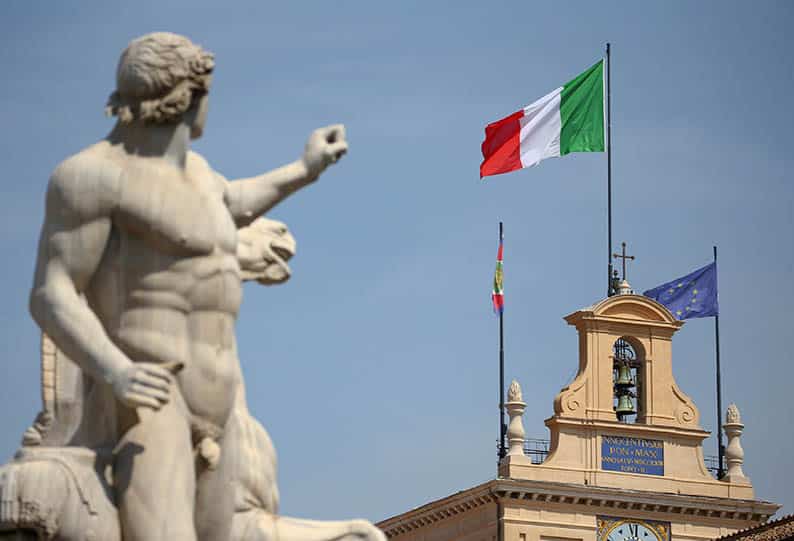 Senior European Union officials believe Italy risks facing a massive debt restructuring task – and one that would hit its own citizens hardest – unless it backs down in its unprecedented challenge to Brussels’ budget rules.

Italy‘s €2.3tn national debt dwarfs that of Greece and the euro zone bailout fund would not be able to cope with the costs of supporting its government in a crisis. Any such crisis could threaten the euro itself, seen by many as the EU’s greatest achievement.

Since Brexit, EU officials also say they have seen that leniency gets them nowhere in dealing with governments that want to challenge their authority.

The government in Rome said last week it wanted to triple the 2019 budget deficit plan its predecessors set out to 2.4 per cent of gross domestic product (GDP) and keep it at that level also in 2020 and 2021.

“When Tria talked about planning a deficit of 2.4 per cent for the next three years in the Eurogroup, jaws dropped everywhere,” one senior euro zone official said. “The mood was that this was really a terrible signal.”

The increased borrowing would help pay for the campaign promises made by Italy‘s ruling parties – the anti-establishment 5-Star Movement and right-wing League – to lower the retirement age, cut taxes, invest in infrastructure and boost welfare.

The draft budget blatantly breaks EU budget rules that oblige Italy, which has a debt to GDP ratio of 133 per cent, the second-highest in Europe after Greece, to cut debt every year and turn its structural deficit into a surplus.

With Italian economic growth at a crawl, such plans have also raised investor concerns over Rome’s ability to repay, and Italian government bond yields have surged to 4.5-year highs this week as investors sell up.

The yield rise and criticism from euro zone finance prompted Rome to suggest it could cut the deficit in 2020 to 2.2 per cent and bring it down to 2 per cent in 2021. But that was not nearly enough, officials said, even though yields fell in response.

“The positive market reaction to the Italian proposal on 2020 and 2021 is absolutely ridiculous, they are desperate to find some good news, but that means they are under an illusion,” a second senior official said.

“People are underestimating the scale, the complete insanity of the deviation. And Italian growth assumptions are ludicrous. Growth, especially with this government, will not get better, it will get worse,” the second official said.

SLEEPWALKING INTO A CRISIS

“The budget plans for the next three years mean that Italy, and the euro zone with it, are sleepwalking into a next crisis,” a third senior official said.

The euro zone’s European Stability Mechanism (ESM) bailout fund, set up to lend to sovereigns cut off from markets in exchange for reforms, helped Greece get back on its feet after three successive bailouts worth almost €250bn in total.

“The general agreement is that Italy is too big to save through the ESM. And it is not just technical issues about the ESM’s capacity, but first and foremost political: people, especially the northerners but others too, don’t want to even try using the ESM for Italy,” a fourth senior official said.

“So a big, huge, debt restructuring would be the only way,” the official said, in a view echoed by several others.

Some two-thirds of Italy‘s national debt is owned by Italian institutions and individuals, making them potentially the biggest victims of a debt crisis.

“If things go bad, a restructuring will have to follow, and that will wipe out the savings of a large part of the Italian people,” the first senior official said.

Euro zone officials said the leaders of Italy‘s ruling coalition, Matteo Salvini and Luigi Di Maio, are not interested in sticking to EU budget rules because conflict with Brussels helps their popularity in opinion polls.

The question now is whether pressure from the euro zone, including the likely rejection of the draft budget by the European Commission this month as well as from Italian businesses which stand to lose the most in a crisis, would be effective quickly enough for the budget to be changed.

“The kind of confrontation they would get is way beyond what they could imagine,” the second official said referring to the potential market turmoil.

“They are living on the moon. It is completely irresponsible what is happening.”