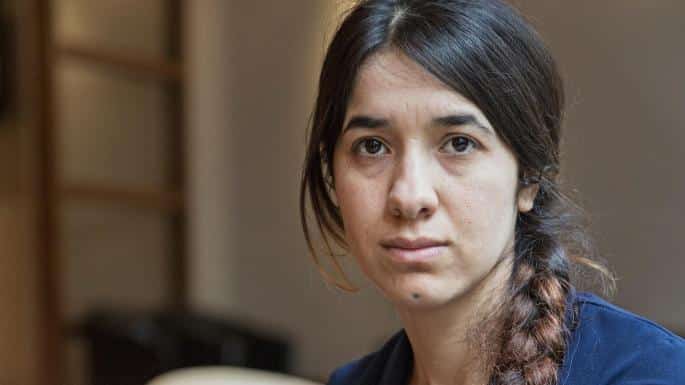 An Iraqi Yazidi woman held as a sex slave by Islamic State militants said she hoped winning the Nobel Peace Prize would put the spotlight back on the plight of her people.

Nadia Murad, who became the face of a global campaign to free the Yazidi, was on Friday named as a winner of the 2018 prize alongside Denis Mukwege, a doctor who helps victims of sexual violence in the Democratic Republic of Congo. .

Murad was one of about 7,000 women and girls captured in northwest Iraq in August 2014 and held by Islamic State in Mosul where she was tortured and raped. She escaped after three months and reached Germany, from where she campaigns for her people.

She has taken to the world stage to appeal for support for the Yazidi, in the United Nations Security Council in 2015 and to governments globally, earning her the appointment as a U.N. Goodwill Ambassador.

Murad said she was “honored and humbled” by the award which she would share with Yazidis, Iraqis, Kurds and other persecuted minorities as well as victims of sexual violence.

“As a survivor, I am grateful for this opportunity to draw international attention to the plight of the Yazidi people who have suffered unimaginable crimes since the genocide by Daesh (the Arabic term for Islamic State),” Murad said in a statement.

“We must remain committed to rebuilding communities ravaged by genocide. Survivors deserve a safe and secure pathway home or safe passage elsewhere.”

She said the prize would make many Yazidis think about family members still unaccounted for as well as about 1,300 women and children who remain in captivity.

She said it made her think of her mother who was killed by Islamic State when she and many other young women in her village were taken captive and then sold repeatedly for sex as part of the militants’ slave trade.

“Women in particular have suffered greatly as they have been, and continue to be the victims of sexual violence,” she said.

Six of her nine brothers were also killed as the militants attacked Yazidi communities in Iraq in what the U.N. has called a genocidal campaign launched by the Sunni militants against the religious minority.

The Yazidis, a religious sect whose beliefs combine elements of ancient Middle Eastern religions, are regarded by Islamic State as devil-worshippers.

Amal Clooney, legal counsel to Murad and to Yazda, a non-profit organization that represents Yazidi survivors, said the prize sent a message that survivors of sexual violence must not be ignored and their abusers must be held to account.

“At a time when so many women’s voices are still silenced, Nadia’s has been heard around the world,” Clooney said in a statement.

Yazidi campaigners said the award would reinvigorate their quest for justice.

For although the militants were driven out a year ago, many Yazidis still live in camps, afraid to return home, charities say.

A U.N. investigative team began work in August – nearly a year after being created by the Security Council – to collect and preserve evidence of acts by Islamic State in Iraq that may be war crimes, crimes against humanity or genocide.

Murad Ismael, the head of Yazda, said the prize sent a powerful message that even small minorities could be heard.

“Nothing can substitute what we have lost, not a prize, not all the prizes of the world but you have to look forward.”