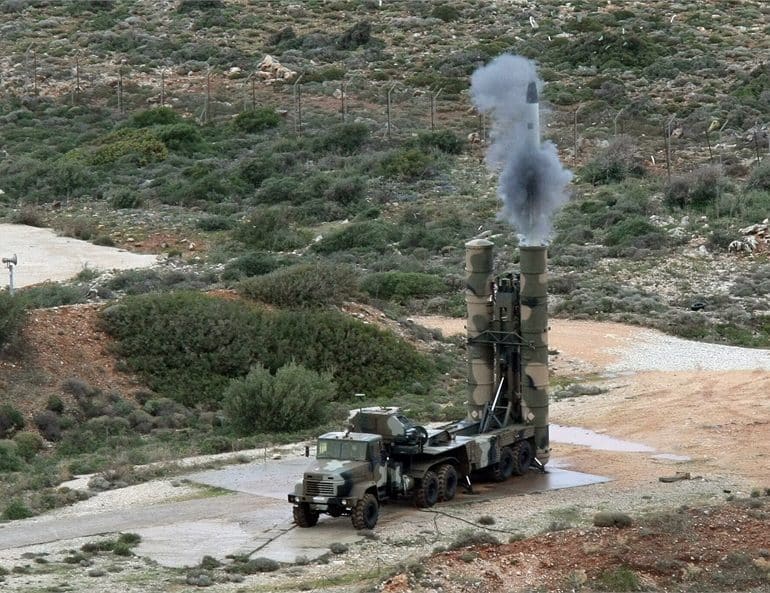 The infamous S-300 missiles that were eventually sent to Crete

With the Cyprus negotiations deadlocked, politicians are reassuring the public with talk about upgrading the island’s ‘geostrategic value’ through a ‘proactive foreign policy’ and the pursuit of regional alliances. But analysts say that these terms – enthusiastically echoed by many local pundits – are little more than buzzwords designed to distract a largely gullible public from the lack of progress in the peace talks.

And instead of indulging in wishful thinking, they add, politicians should be focusing on the possibility of Unficyp’s withdrawal and renewed Turkish sabre-rattling over gas in Cypriot waters.

“I am very glad that at the moment many powers, including powerful ones, around the world regard Cyprus not as a problem for the United Nations, but primarily as a country with considerable geostrategic and geopolitical importance.

“And as you are aware,” he added, “my dream has always been a free, reunited Cyprus.”

Piggybacking on those remarks, 24 hours later socialists Edek released a statement, advocating for the “need to further boost the geostrategic role of Cyprus and Greece in the broader Middle East”.

Edek went on to propose a three-pronged strategy: actions at the UN and EU levels; enhancing trilateral cooperation in the energy sector and the construction of the EastMed pipeline; and a military pillar, reactivating the Unified Defence Doctrine between Greece and Cyprus.

“We’ve been there before,” offers Stavri Kalopsidiotou, international law expert and a member of Akel’s Cyprus desk.

Current talk of a defence pact with Greece is merely a redux of the mid-1990s, she adds.

Kalopsidiotou recalls that once the Ghali Set of Ideas (named after then UN Secretary General Boutros Boutros-Ghali) fell by the wayside, attention in Cyprus turned toward beefing up the military. It all ended with the fiasco of the S-300 anti-aircraft missiles.

She was referring to the 1997-8 ‘missile crisis’ when the Clerides government purchased S-300 missiles from Russia but was forced to redirect them to Crete following a barrage of threats from Turkey.

“The parallels with today are clear. It’s the sort of rhetoric that crops up whenever the Cyprus peace process gets stuck. We start hearing about alliances – which are not necessarily bad, don’t get me wrong – and a pivot towards militarism.

“Unfortunately, I think that both the past as well as the present chatter about supposedly upgrading our geostrategic role through military doctrines are one and the same: demagoguery, to distract the public from the fact that there is no progress in peace talks.”

Qualifying, Kalopsidiotou says she hopes these are no more than idle words, otherwise “if the chicken hawks actually believe their own rhetoric, I worry they must have forgotten that negotiations are the only way to solve the Cyprus problem and achieve lasting peace on the island.”

And she calls for a reality check: “In Cyprus, do we believe for instance that in the absence of a comprehensive solution we can deter or neutralise Turkish provocations in the Exclusive Economic Zone? Alliances or not.

“And how convincing are we in demanding the scrapping of the Treaty of Guarantee when at the same time we revive talk of the defence doctrine? These are hard questions indeed.”

But in a section of the media, the ‘geopolitical upgrading’ of Cyprus has become a runaway train.

On October 1, Phileleftheros – the top circulation newspaper – ran a news story claiming that Cyprus’ crafty diplomats are hard at work behind the scenes, seeking the assistance of Israeli prime minister, Benjamin Netanyahu, in the matter of the United Nations Peacekeeping Force in Cyprus.

Netanyahu, the article alleged, is being prodded to leverage his close relations with the United States’ ambassador to the UN Nikki Haley so that she in turn convinces the Trump administration not to veto the renewal of Unficyp’s mandate come January.

The future status of Unficyp is of major concern to Greek Cypriots. The absence of an international policing force would increase the likelihood of hot incidents in the buffer zone.

“First of all, as I understand it, Nikki Haley is actually a big proponent of the new US policy of shuttering redundant UN missions around the globe.

“Next, why would Netanyahu help Cyprus on this? What would he get out of it?”

Like Kalopsidiotou, Faustmann is of the opinion that the Cyprus peace process is going nowhere, giving rise to all sorts of wishful thinking in the media sphere.

“Keep in mind the Americans are still very frustrated that last year’s talks in Crans-Montana went nowhere. If the UN fails to convince them by October – when the UN chief issues his report on Cyprus – that prospects for negotiations can be revived, the US might well pull the plug on Unficyp.

Besides, according to Faustmann, the geostrategic assets of Cyprus are already well known and haven’t changed for decades.

“The island has value because of the intelligence installations and listening outposts, and as a staging post for the West’s military operations in the Middle East. But that’s always been the case here, nothing new here.

“In this sense, Cyprus is, to all intents and purposes, a part of Nato, but without the benefits of Nato membership. You might say Cyprus is a bride without a dowry.”

On the other hand, geopolitics are constantly in flux. As a hypothetical example, should oil giant ExxonMobil make a huge gas discovery off Cyprus this autumn, that could give a boost to the island’s significance.

But that remains to be seen, notes Faustmann.

Asked for a comment, a former Cyprus diplomat says one should not completely discount the proposition that the island’s soft power may be growing.

The source, who requested anonymity, cited the series of trilateral summits with Egypt and Greece as a positive.

“But the question still stands: has this purported increase in our geostrategic significance yielded any concrete results, in terms of how we want to solve the Cyprus problem? From my viewpoint, I cannot see anything.”

Our View: Time to get real over our geopolitical significance