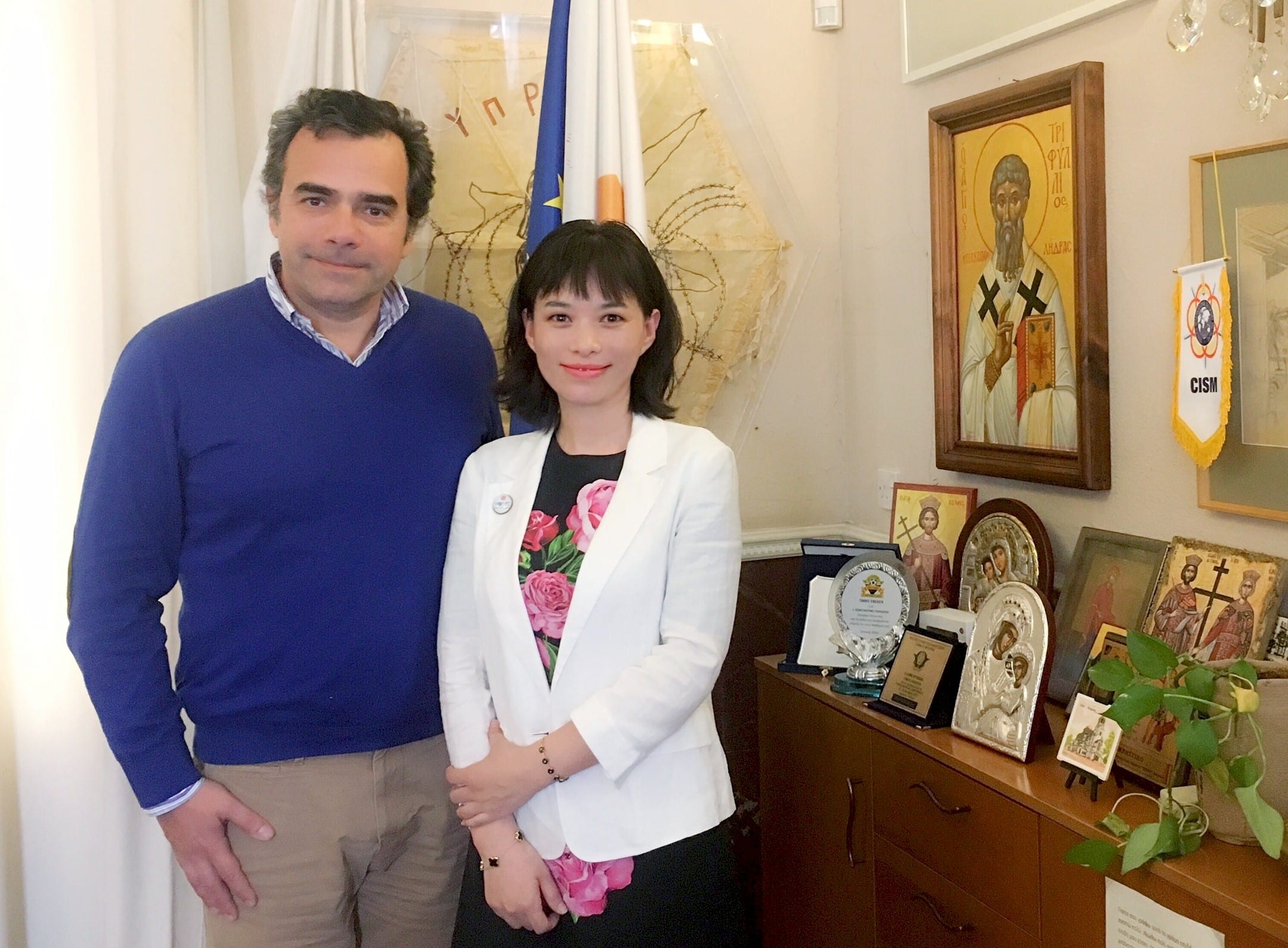 XiXi out and about, here talking with the mayor of Nicosia Constantinos Yiorkadjis

A Chinese expat is helping fellow countrymen integrate into a new culture with her own Mandarin language web portal which specialises in all things Cyprus.

Realising that relocating such a vast distance was a leap into the unknown for many new residents, its creator XiXi says her website is helping those who were unsure of what to expect.

“I immediately discovered when I moved here a lack of information for Chinese about Cyprus,” she told the Sunday Mail. XiXi says expat life has so many complex facets, especially when the relocation is so far away from home.

“So, I established the site as a platform for new Chinese immigrants investing on the island. The website is like an online Chinese community, where people talk to each other, help each other”.

Since going online, the site – Home In Cyprus – has become an essential tool for the ever-growing Chinese community. Its mission is to help the Chinese diaspora get things done, offer advice, form friendships and enjoy life on the island. And, it seems visitors are embracing it and diving right in.

“The topics Chinese are most interested in, is Cypriot policies and laws regarding investment, private schools and education system in Cyprus, various kinds of insurances – especially health insurance,” XiXi says.

The China-Cyprus relationship has been expanding rapidly on a number of fronts. Last year, President Nicos Anastasidies said Chinese investors buying local property had contributed to the recovery of the beleaguered construction sector after the 2013 crisis.

The countries are getting closer in other areas too. Just last week the second Cyprus Chinese Cultural Festival took place in Limassol which aimed at offering a role in promoting not only cultural exchanges but also economic and trade cooperation between Beijing and Nicosia.

Figures show that the Paphos region has attracted the most buyers from China, as property developers in the region were the first to visit Beijing to attract customers after the bailout. The Chinese community have developed such an affection for the town, that last week dancers from north China’s Xi’an City flew in to perform during the 6th Chinese Cultural Night in front of Paphos Town Hall.

Like similar portals for Russians and British expats, XiXi says new arrivals have many questions, like how to enrol at private schools, how to buy and use medical insurance, signing up for utilities and banks accounts, and the best routes and connections to and from the island.

She says the thirst for information spawned a series of features and interviews about Chinese experiences in Cyprus, as the community shows an affinity for local life, culture and people.

So, in response, XiXi has taken on the role of also reporting what’s happening here. Recent features include the Chinese taking part in Limassol carnival, the Chinese cultural festival in Limassol – and interviews, such the Cypriot practising traditional Chinese medicine and a Chinese language teacher in Cyprus.

“Currently, over 3,000 investor families are interacting, communicating regularly about various topics via WeChat, more than 100,000 viewers read stories on Home in Cyprus’ different platforms,” she adds.

Since opening six years ago, the site has published thousands of articles. With the help of Chinese embassy in Nicosia, issues like natural gas exploration, the new Limassol casino, economic issues, investment policy and tourist information have been covered in detail.

“Working in media for 17 years helped me develop the expertise to establish a platform for real exchanges between Chinese who live here and Chinese who are interested in Cyprus, to deliver accurate information objectively and impartially,” she adds.

The past few years have seen growth in trade, investment, education exchanges and plans for more tourism between the two countries.

“We have interviewed officials from China and Cyprus, as commercial counsellor of the Chinese embassy in Cyprus, the mayors of Nicosia and Larnaca, CTO officials, and companies and entrepreneurs,” she said.

“Although the number of members and fans is not large, we always concentrate on the accurate dissemination of news and information about Cyprus.”

Home in Cyprus  (www.hcyprus.com) publishes stories and information on WeChat (a Chinese combination version of whatsapp and facebook in addition to Weibo (a Chinese version of Twitter), and some popular news platforms and websites, such as toutiao.com.