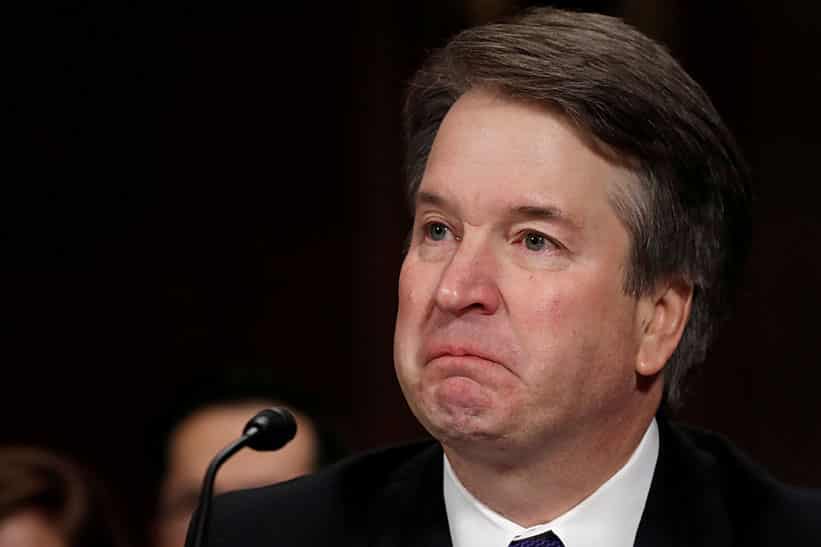 An emotional Brett Kavanaugh testifying before the Senate judiciary committee

The US president appoints justices of the Supreme Court with the consent of the Senate. He nominates, they approve, and he appoints. It is all part and parcel of the system of checks and balances for which the American constitution is famous.

In 2016 the Republican majority in the Senate delayed considering President Obama’s choice preferring to hold back in case a Republican won the presidency. In the event Donald Trump won and filled the vacancy by appointing judge Neil Gorsuch. The selection was rightfully for his predecessor to make but it was such a good choice that even Obama himself approved.

The nomination and confirmation process is a highly political exercise at the best of times but where there is some question about a candidate’s moral character his suitability has to be resolved convincingly.

The reputation of the US Supreme Court is at stake with every appointment. Its unique status as the guardian of the American constitution was conceived by the founding fathers – the most politically enlightened group of philosopher lawyers the world has ever seen – to protect democracy and the Union.

In their wisdom the founding fathers made elevation to the Supreme Court a political choice by the president, checked by the elected representatives of the states in the shape of the Senate, but balanced by individual judges of the highest moral character appointed for life and accountable to no one but their conscience and the discipline of the law.

In his controversial book ‘The politics of the judiciary’ the late professor John Griffith of the LSE was critical of the system of judicial appointments in England whereby members of the judiciary emerged from an elite pool of barristers of a similar background and education without democratic input. I am not sure what he would have made of the choice of judge Brett Kavanaugh by a man like President Trump, but there is a tension between the democratic process of selection like that of the US and the selection of top judges in UK and Europe in which other judges elevate top judges to high judicial office even if their actual appointment is done by elected politicians.

Under the constitutional reforms of 2005 justices of the UK Supreme Court are recommended to the sovereign for appointment by the prime minister, but she has to choose from names put forward by a selection commission comprising the president of the Supreme Court, the Lord Chief Justice, the Minister of Justice and the heads of the civil and family divisions of the High Court.

Appointment to the European Court of Human Rights is closer to that of the US Supreme Court but only in theory. The appointment to it is by the parliamentary assembly of the Council of Europe from a panel of three nominated by individual member states.

Whatever the system, the one overarching qualification required for high judicial office, apart from competence, independence and high moral character, is good and wise judgement.

Wise judgement and a judicial temperament improve with age. Appointment for life in the US shows the genius of the founding fathers who realised that in the common law system of precedent, you need the wisdom that comes with age and long experience to ensure the law keeps apace with the times, but always a few steps behind to give transient and ephemeral ideas time to die down.

Assuming justices of the Supreme Court retain all their faculties and remain compos mentes their longevity is conducive not just to their independence but to the wise and proper application of legal principle to novel disputes that society throws up as it evolves over time.

So the suitability of judge Kavanaugh as a man of good judgement and high moral character is crucial. It turns not just on the truth of the allegations made against him by professor Christine Blasey Ford but on the way he conducted himself in meeting those accusations.

She alleged that in 1982 when she was 15 he assaulted her indecently in a clumsy drunken episode.

She testified that he got on top of her and placed his hand over her mouth to stop her yelling that caused her to fear he might accidentally kill her.

She said that he was with a friend called Mark and that Brett Kavanaugh and his friend were laughing at her expense.

Even Trump found her testimony compelling and agreed to launch an FBI investigation; although he could not resist mocking her evidence two days later to cheers from his dumb supporters, proving yet again that he is as dumb as they are.

Judge Kavanaugh’s defence is mistaken identity or a bad case of false memory syndrome. Criminal courts are very familiar with historical sexual assault cases. Usually they involve indecency by old men on young boys and girls. But there are also cases of historical indecent assaults by teenagers on other teenagers many years ago at a time when, in the memorable words of Isabella Allende, their ‘hormones are bursting.’

People need to be careful where identification is challenged. In the long experience of criminal courts, a witness may be honest and convinced in her own mind but wrong, and a witness who is convincing may be wrong too. Also a victim who is able to recognise her assailant may be wrong even when she knows him well.

The fact that Christine Blasey Ford testified she was 100 per cent sure it was Brett Kavanaugh who lay on top of her and put his hand on her mouth is therefore not conclusive.

The question for the Senate, however, is whether in light of her evidence, if a case involving sexual misconduct or gender equality were to come before the Supreme Court would Kavanaugh have sufficient judgement to recuse himself in line with the rule against the appearance of bias?

He has already accepted that he showed a serious lapse in judgement in the emotional way he testified. I am afraid his defence of ‘overwhelming frustration’ at the alleged falsity of the allegations is circular.

The burden is not on Christine Blasey Ford to prove the assault but on Trump to show his selection is suitable.

For me it is unsuitable because no judge with a modicum of judgement would drag his 10-year-old daughter into a confirmation process involving an allegation of sexual assault, as he did when he boasted of his little daughter’s wisdom in suggesting they pray for Christine Blasey Ford.

It reminded me of the minister of health in Britain who fed his children beef burgers during the Bovine Encephalopathy crisis in the 1980s to show beef was safe when it wasn’t.

Judge Brett Kavanaugh’s vigorous denial also reminded me of another lawyer, who famously denied sexual relations: ‘I did not have sexual relations with that woman,’ President Clinton protested.

‘My 10-year-old daughter says I did not try and have sex with that woman’ was effectively what judge Kavanaugh was saying.

Greek Cypriots seem blithely unaware of risks in a non-solution