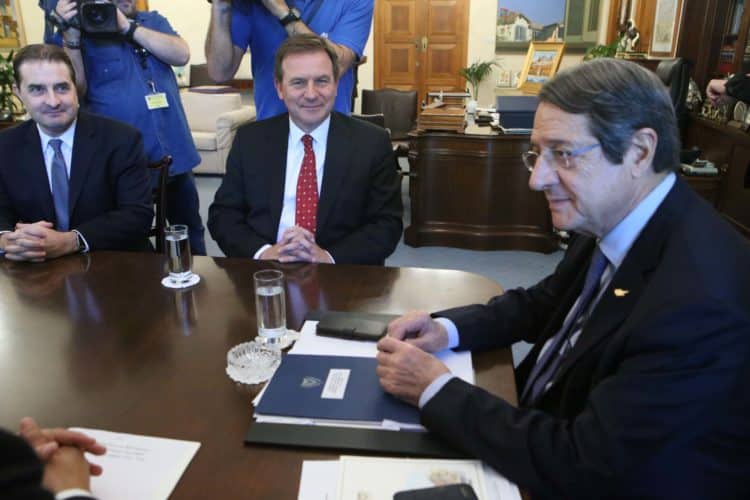 WITH President Anastasiades closing the door on a federal settlement in all but words, and lacking the political courage to openly defend his preferred option of partition, we are hearing more analyses about the forging of strategic alliances and the upgrading of the island’s geopolitical significance via the energy factor.

The general idea is that even without an agreement on the Cyprus problem, the island could use the natural gas in its EEZ to strike energy alliances not only with countries it would supply but also with states whose companies would extract and sell the gas.

The conclusion of these simplistic theories, that we do not need a settlement to exploit our hydrocarbons and become an energy hub for the region, is full of holes and based primarily on wishful thinking. A perfect illustration of this was Saturday’s story in Phileleftheros, claiming there were “prospects of a Franco-American cooperation in the Cypriot exclusive economic zone between ExxonMobil and Total,” following the Cyprus government’s decision over licensing of Block 7. It was adjacent to blocks already licensed to the two companies and the paper jumped to the conclusion that this made their co-operation a “very likely scenario”.

This prospect was behind “the threats being made in every direction by Ankara”, which the paper claimed would now be unable to interfere in Cyprus’ energy policy. “With the support of the countries of origin of the two oil giants a given, the balance in the sea area of Cyprus changes completely, with Turkey foreseeing that in such a case, it would have no room for reaction as it had done in the case of ENI,” the paper said. It suggested the threats made by the Turkish foreign ministry regarding the licensing of Block 7 were aimed at pre-empting this change in balance.

There was not shred of evidence to support the paper’s theory of Franco-American cooperation that would frighten the Turks. Conveniently, it omitted to mention an important fact – the Block 10 concession is held jointly by ExxonMobil and Qatar Petroleum, a state-owned company of Qatar, which has very close military, economic and political ties with Turkey. Would Qatar join any Franco-American cooperation that would put Turkey in its place? A day earlier the senior vice president of ExxonMobil, Neil Chapman met President Anastasiades in Nicosia and said absolutely nothing to support the paper’s speculation.

Speaking in business rather than political terms after the meeting, Chapman pointed out that “what is really important in developing hydrocarbons is the resource, whether it is large, commercial and competitive enough in the global market.” It was a necessary reminder to all those seeing alliances that we do not even know if Block 10 has any hydrocarbons, let alone adequate quantities to make their extraction viable. Will the US and France antagonise Turkey over hydrocarbon deposits that might not even exist? Another scenario would be that if sufficient quantities were found in Block 10 the companies might decide selling the gas to Turkey is the only commercially viable option. We should realise that the only consideration of oil giants is profit.

This may explain why talk of constructing the EastMed pipeline that would take gas from the eastern Mediterranean to Greece is so unrealistic. No pragmatic analysis has been applied to the proposed project because it would undermine another fanciful theory embraced by politicians and newspaper commentators – Cyprus geopolitical importance would increase as it would be the energy hub supplying southern Europe with natural gas. Again, what oil company would opt for this when transfer through a pipeline to Turkey would be much cheaper and means more competitively priced gas?

Companies base commercial decisions on profit prospects and nothing else, which is why it seems so naïve to believe claims like the one made on Saturday by Edek. The party said that Turkey’s threats “prove how important the energy factor is to the upgrading of the geostrategic role of Cyprus”.

Can a tiny country, with a population smaller than a mid-sized European city, with no real defence capability and no ability to protect its EEZ have a geostrategic role? Or, do we seriously think that any major power would jeopardise its relations with Turkey – a country both East and West want as a strategic ally – for the sake of some hydrocarbon deposits in Cyprus’ EEZ?

We need to get real and stop this absurd overestimating of our importance and give up the laughable idea that we can dictate regional developments. This has always been our downfall, but we obdurately refuse to learn from it.

Greek Cypriots seem blithely unaware of risks in a non-solution