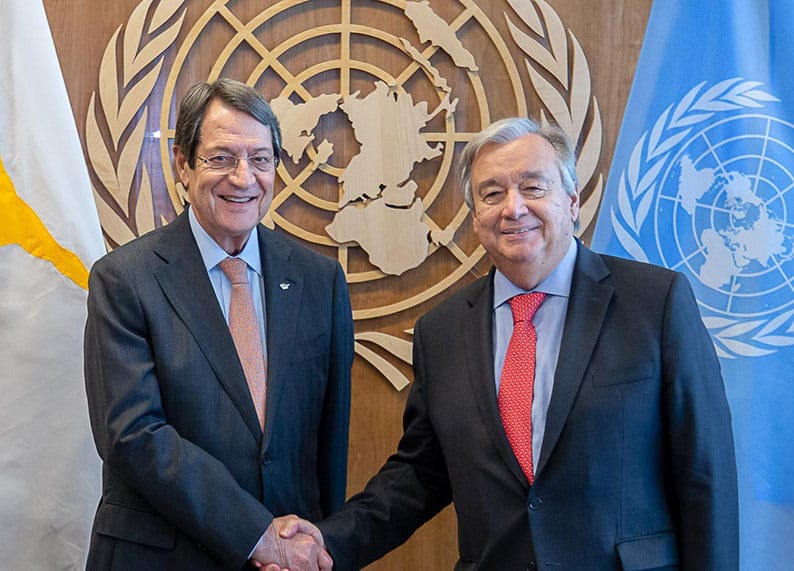 The return of the closed off town of Varosha to its rightful owners could be a game changer and facilitate settlement talks but also build actual trust between the two communities, President Nicos Anastasiades has said.

He was addressing the annual anti-occupation event of the Famagusta municipality in Dherynia that took place on Saturday evening.

Anastasiades said that, as regards Varosha, the situation was “absurd”. “A ghost town, not inhabited by Turkish Cypriots, is not used for supposedly residential needs. It is kept as a negotiating card. Despite the resolutions, the international community is, unfortunately, watching with apathy,” he said.

He added that despite numerous calls by the Greek Cypriot side for the return of Varosha as a confidence-building measure, this has not been made possible so far.

“At some point we should all be wondering where the problem really lies. Why so many presidents, with the will and determination to resolve the Cyprus problem, have failed. Where was the failure to find a solution? Is it because we did not want the solution? Why did the Greek Cypriots, who were the victims of the invasion, would not want the return of the refugees, the recovery of property, the safeguarding of human rights?” he asked.

He added that the Republic of Cyprus has given big fights to become an EU member state, “because we knew that the preconditions would be created that way for the settlement of the Cyprus problem through the application of the EU acquis which would protect not only Greek Cypriots but also our Turkish Cypriot compatriots.”

Turkish Cypriots, he said, must realise that an independent country, member of the EU, did not need a third country, as guarantor and that Turkey did not care for them, “but to serve its own strategic interests.”

He reiterated that there could be no viable settlement with the continuation of guarantees and the presence of Turkish troops on the island.

“Do Turkish Cypriots need the presence of an army to feel safe when so many other methods are offered either by the UN Charter or the EU Treaty,” Anastasiades said.

He also dismissed Turkey’s claim on the equal treatment of Greek and Turkish nationals post-settlement. “Greeks have no preferential treatment. They are treated the same way as other European citizens.”

If the same approach was adopted for Turkish nationals, he said, in a very short time, the 800,000 Greek Cypriots would be a minority. He said the island would experience a situation similar to that in Lebanon where demographics were a very sensitive and complex issue that led to sectarian hostilities and a civil war.

“I suggested we could accept this position if a decision would adversely affect the Turkish Cypriot community, as long as there is an effective mechanism for resolving disputes that will arise,” Anastasiades said.

He could not accept the narrative that “on the one hand, we were very close (to a solution) in Crans-Montana, but on the other, Anastasiades rejected the settlement through his actions.”

Prior to his address, Anastasiades told members of the press he had asked Turkish Cypriot leader Mustafa Akinci to meet informally, “even for coffee to exchange some concerns about the  course of our country” but he turned down the invitation.

“The reply was that he did not want to give the impression that the talks were relaunched,” Anastasiades said. Akinci had called Anastasiades last week to wish him on his birthday.

Anastasiades, on Monday, will brief the party leaders about his meeting in New York with the UN Secretary-General Antonio Guterres and other contacts he had on the side-lines of the UN General Assembly. Government Spokesman Prodromos Prodromou said the council of leader would also discuss ways of persuading UN action to relaunch the talks.

The UN Secretary-General was awaiting the report of his envoy Jane Holl Lute following her contacts with all the parties before deciding whether to re-launch the peace process.

In a Blues mood