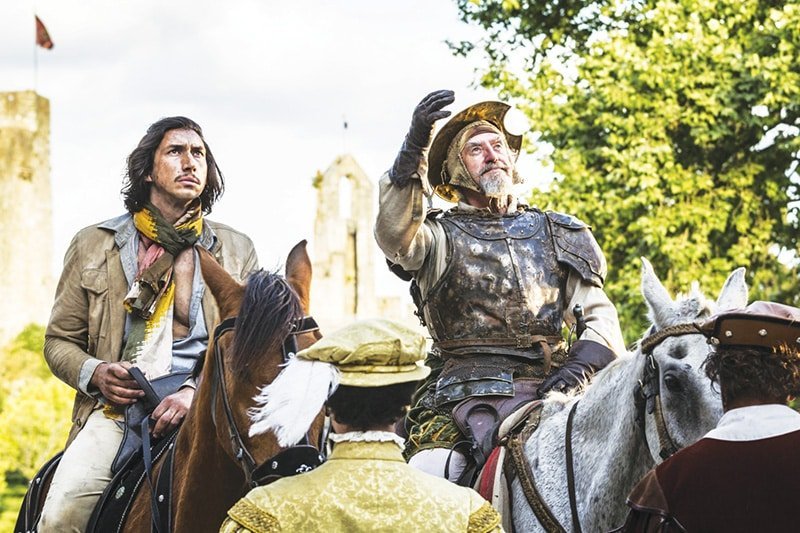 The man who killed The Man Who Killed Don Quixote may have been Jean Rochefort, the French actor who dropped out of the project in 2000 with a herniated disc – or it may have been the German and French insurers who bickered for years, keeping the project in limbo, or it may have been God Himself, who sent down a flash flood on the second day of that misbegotten shoot in 2000. Either way, Terry Gilliam’s gloss on Cervantes has become a byword for a chequered production history, persistently on the point of being made before collapsing unhappily; a film, like it says in an opening caption, “more than 25 years in the making… and unmaking”.

Fortunately, Don Quixote never really died – and here he is now, with Gilliam still at the helm and a final dedication to the memory of Rochefort and John Hurt, both of them cast as Quixote at different times. That said, it’s a little astonishing (or not so astonishing; other long-gestating projects had similar issues, like Scorsese’s Gangs of New York) that, after so many years and so many iterations of the script, no-one thought to make it punchier and pare it down to its essence. Indeed, the opposite is true: it’s as though, after trying so long to get this made, Gilliam is determined to cram everything into its way-overlong 132 minutes, from every stray visual idea to every half-baked musing on religion, Islamism, you name it. Even Trump gets name-checked at one point.

Adam Driver helps tremendously, keeping things grounded even when his dialogue gets reduced to a jumble of swear-words. He plays Toby, a successful film director who’s lost something of his Don Quixote quality. “I don’t dream,” he tells an assistant. “You don’t need to,” comes the reply; “You have everything.” Toby’s making a Don Quixote-themed advert in Spain, but he’s out of ideas; a mysterious gypsy sells him a DVD of a student film Toby made years before, also a version of Don Quixote, set in the village of Los Suenos (which is Spanish for ‘Dreams’) – so he heads to the village, reconnecting with his past and the old shoemaker (Javier, played by Jonathan Pryce) whom he once cast as the noble “knight errant”. Javier is older now – and also insane, believing himself to be Quixote and casting Toby as his squire, Sancho Panza.

So begins a picaresque journey that includes two cops (one has a stammer), a little old lady with a taser, a bag of gold coins, a joust, a crazy family who may be Arab terrorists, a big plastic head that looks like it may have been severed from a carnival float – and of course Quixote’s madness, a.k.a. his creative vision. He sees giants where lesser men see windmills, just like a filmmaker dreaming up baroque visual conceits where others see only mundane reality. (Best bit: human eyes appear on sacks of wine hanging in a pantry.) It’s clear that Gilliam thinks of himself as a Don Quixote figure – and indeed his DP Nicola Pecorini, who’s been with him since the start of the project, appears in the final credits as ‘Nicola Sancho Pecorini’, as if to underline his loyalty to the Dreamer-in-Chief.

The film tries the patience – yet it’s also ingenious and original. Gilliam’s been directing since the 70s, yet he’s never learned (or cared) about basic coherence; Don Quixote is flabby – and it also falls between two stools, not truly dreamlike (like, say, David Lynch) because one is constantly aware of the half-baked message Gilliam is peddling, something about idealism and the power of the imagination. The result is bloated, especially a pageant-like final act at a seemingly endless costume ball – yet the early scenes are funny and the middle section, with Javier and Toby on the road, hits some remarkable notes, all happy tangents and surprising connections. Bleating sheep are equated with the call of the muezzin. The Spanish Inquisition makes an appearance. Things are revealed as similar things, even words shape-shift into similar words. There are puns on squire/squirrel, rustic/rusty, telephone/elephant; most mind-bogglingly of all, Toby says ‘Enchanter’ then moves to reassure the alarmed Don Quixote that he actually said ‘Eddie Cantor’ – and, to prove it, launches into a song-and-dance impression of the largely forgotten 1930s comedian. It’s the damnedest thing you’ll see all year.

The Man Who Killed Don Quixote also counts among the year’s damnedest things, if only because – after so many years of seeming cursed – it finally exists. This is the work of a grateful man, though his gratitude seems to veer between exhilarated abandon – the desire to cram in absolutely everything – and exhausted relief that he finally got to make what may be his swansong (Terry Gilliam will be 78 next month). The film is messy, overlong, but sometimes comes close to being worth the hassle – though in fact the hassle isn’t over, with former producer Paulo Branco trying to block it from being released in a legal dispute over who owns the rights. 25 years on, the curse continues.