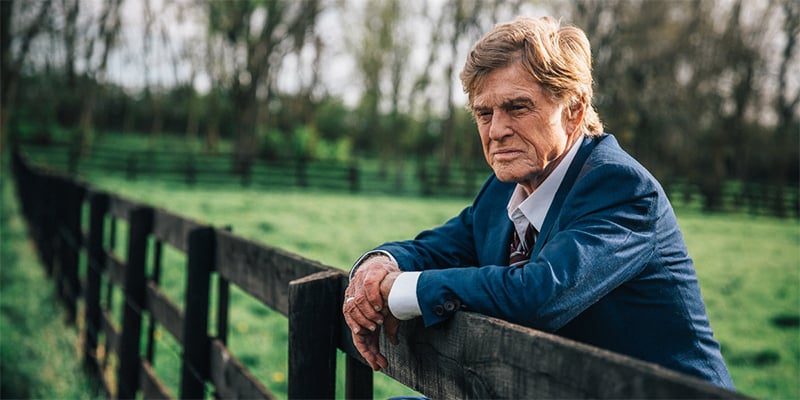 We open with a caption: “This story, also, is mostly true” – a reference to Butch Cassidy and the Sundance Kid (1969) which opened with the caption “Most of what follows is true”. Robert Redford starred as the eponymous Kid (a significant name for him, later parlayed into his Sundance Institute and Festival) in that classic Western, playing a bank robber in the role that made him a star. The Old Man & the Gun is the other side of that particular coin, Redford’s final film as an actor (so he says) in which he also plays a bank robber, Forrest Tucker, a twinkly senior citizen who carried out a string of heists in the early 80s; a fascinating man and a real person, mostly.

That ‘mostly’ comes with a downside: it’s fair to say that the film – which is mellow, wry, visually retro, and very bittersweet – softens the real Mr. Tucker, who died in jail in 2004 and is described on Wikipedia as a “career criminal”. There’s a single, rather out-of-nowhere scene where his daughter paints a picture of a deadbeat dad who repeatedly lied to his family (if you catch him, she tells the cops, I don’t want to see him) – but it comes just a few minutes after a scene where Tucker plays anonymous benefactor, trying to pay off his girlfriend Jewel’s mortgage, and the character is generally closer to a charming rogue (with spry, 81-year-old Redford providing the movie-star charm) than a troubled sociopath. Even when he’s robbing banks, he does it charmingly. “He was very polite,” recalls one teller. “He just seemed… happy,” ventures another.

Some will call it sentimental, a feelgood tribute to a Hollywood legend, and leave it at that; yet there’s more going on here. ‘Mostly true’ applies in another, more magical way, because the film, directed by 30-something old soul David Lowery (who made last year’s equally meditative A Ghost Story), isn’t too concerned with the nuts and bolts of Tucker’s story. Lowery consistently locates little grace-notes, offbeat touches taking the film to another level: when Jewel (Sissy Spacek in a sly, generous performance) meets Forrest in a diner, for instance, the camera floats away from their table – just for a few seconds, but unmistakably – to take in the rest of the customers, a table of teens just behind them and some hippy-looking guys with bandannas at the counter. Earlier, we pause for a little girl – actually the daughter of John Hunt (Casey Affleck), the cop on the case – to read out a childish letter to President Reagan, little kids being a recurring motif in general. Add the many references to age (Hunt has just turned 40: “All downhill from here!” teases his wife) and you get an idea of the film’s m.o., which is to evoke not just Tucker but his place in the world, the whole circle of life going on around him.

Tucker’s own stage of life is the most degrading. “I’m gonna be 67 years old, my bones hurt!” grumbles the great Tom Waits as one of his sidekicks. Old age is no time for robbing banks, indeed one reason why Forrest and Co. get away with it for so long is that no-one takes OAP robbers seriously (even the cops dismiss it as a “funny story”, the criminal equivalent of a cat video). Our hero stubbornly refuses to feel old – riffing on the ageless quality we associate with movie stars – though the film quietly wonders if he’s right to do so. Tucker, after all, is an escape artist, having escaped from various prisons and detention centres throughout his life. This is not just mentioned in passing, we actually see a montage of his various escapes – and the real poetic irony in The Old Man & the Gun may be the fact of a lifelong escapist trying to escape (by robbing banks) from the one thing that’s sadly inescapable: growing old.

This is not just a loveable-codgers-do-crime movie, like last year’s Going in Style; it’s sadder and deeper than that. There’s so much to like about The Old Man & the Gun. Gene Jones (the nervous “friendo” from No Country for Old Men) gets some nice character moments as an owlish bank manager. Little kids, as already mentioned, recur on the fringes, the opposite stage of life to Tucker’s though also, in a way, the one that’s most like his own. Old age, like childhood, is a time when “it’s okay to be selfish”.

Above all, there’s action as a kind of escape, not just the banks – no wonder Forrest ‘seems happy’ – but also, for instance, a night-time car chase made ethereal and beautiful by the addition of Jackson Frank’s 60s ballad ‘Blues Run the Game’. The scene is a highlight, typifying most of the virtues of this wistful, airily poignant movie. Forrest drives off, cop cars in pursuit, commandeers another car, heads out of town – then ends up on a horse (!) which he rides into the desert in the half-light, striving to be free even with the cops closing in. A cowboy again, like the Sundance Kid.