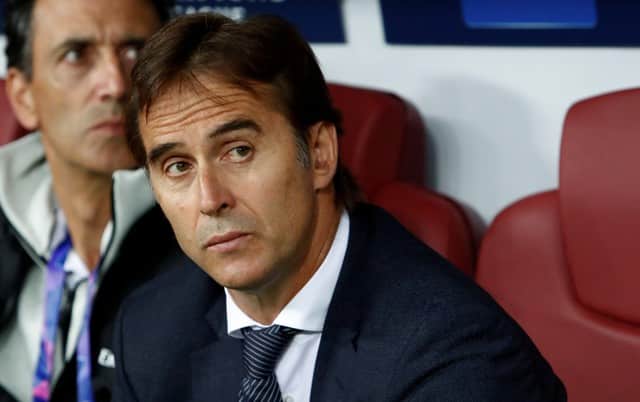 Real Madrid captain Sergio Ramos has warned his club against sacking beleaguered coach Julen Lopetegui even after the team sank to a third defeat in four games by losing 1-0 at Alaves on Saturday, saying it would be “crazy” to change manager.

Real, beaten by a header from Manu Garcia in the fifth minute of added time, have now lost three of their past four games, in which they have also failed to score.

It is the club’s longest run without finding the net since April 1985, when none of the players in the squad had been born.

“Other people take decisions like that but it’s never good when there is a change in coach. It would be crazy,” Ramos told reporters.

“We have to move on, because the season is very long and there’s a very long way to go. Whoever says Real Madrid are dead is always proved wrong in the long term.”

Ramos also said the players should take responsibility for the defeat and now was not the time to look for scapegoats.

“We are the first people that need to do more to improve and we’re trying to do that. It’s not fair to point the blame at anyone, we’re all conscious of the reality,” said the defender.

“Results are what people talk about and especially when you lose but we are still committed, we are still ambitious and we still want to win, it’s in our DNA. We’re on the right path despite the bad results.”

Despite their ragged form, Real are joint top of the La Liga table with Barcelona and Alaves, although Barca will march three points clear at the top if they win at Valencia on Sunday.

Lopetegui was notoriously sacked as Spain coach on the eve of the World Cup due to the circumstances in which he joined Real but he said losing a second job this year was not on his mind.

“Coaches don’t tend to think about that and, even though we are apparently on a very negative run, the most positive thing is that at most we will be three points behind the league leaders,” Lopetegui said.

The coach also said his side’s poor results were partly down to Real’s terrible fortune with injuries, which deepened after Gareth Bale and Karim Benzema were forced off during a game in which the coach already had to contend without Marcelo, Isco and Dani Carvajal.

“We have to recover our most important players and it’s important to stay calm. Today we had some good chances but the injuries to Bale and Benzema punished us a lot,” he added.

“The team have been working like beasts for three months, it’s logical that our fans are disappointed but we’re in October, we’re (at most) three points off the top of the table and we’re going to recover as soon as possible.” (