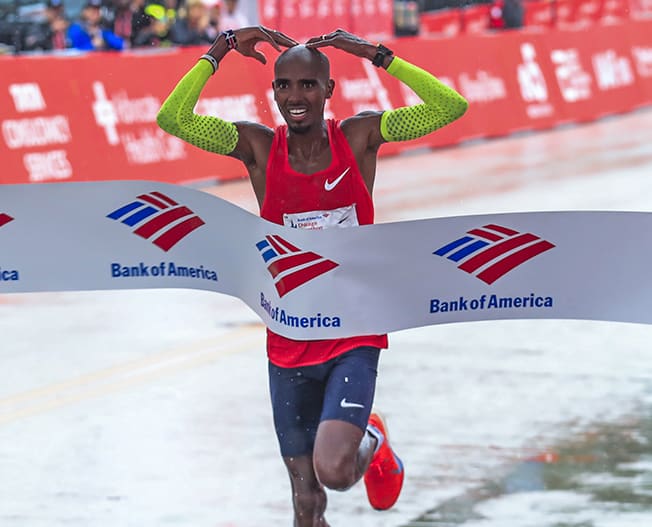 Britain's Mo Farah, 35, thrust his right arm into the air as he neared the finish line and delightedly celebrated the victory with his 'Mobot' pose

Mo Farah scored a stunning Chicago Marathon victory as he won in two hours five minutes and 11 seconds in only his third race over the distance on Sunday.

After biding his time for much of the race, the British four-time Olympic track champion surged to the lead in the final four miles and broke Ethiopian Mosinet Geremew to shatter the European marathon record of 2:05:48 despite wet, cool and sometimes windy conditions.

Farah, 35, thrust his right arm into the air as he neared the finish line and delightedly celebrated the victory with his ‘Mobot’ pose. “It was amazing to cross the finish line first,” he told reporters. “This is a major marathon.”

Geremew finished second in 2:05:24 with Japan’s Suguru Osako third in a national record of 2:05:50. Farah’s former training partner and the defending champion Galen Rupp was fifth in 2:06:21.

Kosgei, 24, won by more than two minutes as she defeated Ethiopia’s Roza Dereje.

Farah’s victory sealed his transition from track to roads.

The double Olympic 5,000 and 10,000 metres champion had run the marathon only twice — in the 2014 and 2018 London races — but in defeating a strong international field he showed he has the stamina and tactics to do well at the longer distance.

“We weren’t sure about the pace because the conditions weren’t great,” he said of the early stages of the race.

“Everyone was thinking go for position rather than time. Then towards the end we picked it up.”

Only Geremew, the fastest man in the field with a 2:04.00 marathon, was able to stay with Farah and even he succumbed to the Briton’s kick.

The two men worked together for six years in Oregon under Alberto Salazar before Farah returned to England last year to train with Gary Lough, the husband and former coach of women’s world marathon record-holder Paula Radcliffe.

After a break, Farah is likely to turn his attention to more gold, first at the 2019 Doha world championships and then the 2020 Olympics in Tokyo.