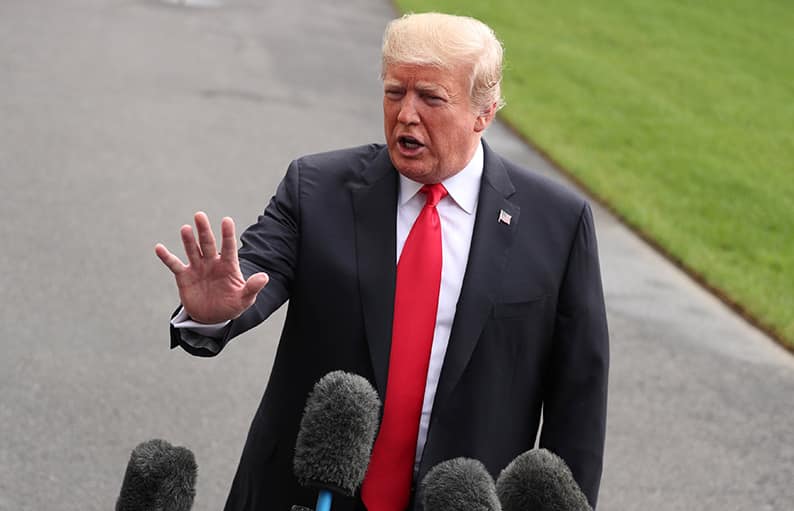 US President Donald Trump talks to reporters as he heads to the Marine One helicopter to depart the White House for travel to Florida in Washington, US, October 8, 2018

US President Donald Trump said on Monday that he has no plans to fire Deputy Attorney General Rod Rosenstein, the Justice Department official in charge of the federal investigation into Russian meddling in the 2016 presidential election.

There has been widespread speculation that Trump might fire Rosenstein, a frequent target of Trump’s tweeted criticism, after a New York Times report that he had made remarks about Trump’s fitness for office and offered to tape record conversations with him.

Asked by a reporter if he had any plans to fire him, Trump said, “No I don’t, no.”

Rosenstein was flying with Trump on Air Force One to Orlando, Florida, where Trump was set to speak to police chiefs.

Rosenstein has denied the Sept. 21 New York Times report as “inaccurate and factually incorrect.” The article said that while Rosenstein had made the suggestions over concern about chaos in the administration, none of them actually came to fruition.

Rosenstein oversees Special Counsel Robert Mueller’s Russia investigation. Russia denies interfering and Trump says there was no collusion between his campaign and Moscow.

Trump told reporters on Monday that he has a “good relationship” with Rosenstein.

“I didn’t know Rod before, but I’ve gotten to know him, and I get along very well with him,” he said.

Tax incentives for filmmakers only available for companies