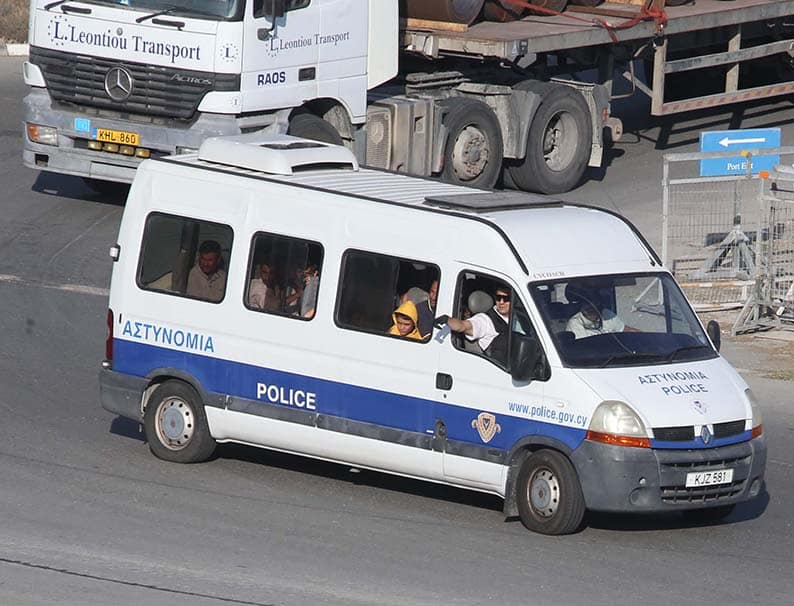 A mini-bus transporting the Syrians after they arrived at Larnaca

Twenty Syrians were rescued south of Cape Greco on Monday after authorities were notified that their vessel was sailing out of control.

A marine police vessel collected 10 men, two women, and eight children from the boat and brought them to Larnaca port in the afternoon. The group told authorities they are from Syria and that they bought the boat and a GPS for €1,000 in Lebanon. They said that they set off to Cyprus late on Friday, early Saturday. The group consists of two couples, each with their four children, and eight men.

No more details as to their trip are known at the moment, as police continue investigations.

The defence ministry said the search and rescue centre had received an emergency call at 9.32 am from a freight ship, saying a small vessel with a large number of passengers was out of control 40 nautical miles off Cape Greco.

A patrol boat was dispatched to the area and recused the group by noon, bringing them at the Larnaca port at around 4pm.

The group, expected to file for asylum in Cyprus, are to be taken to the reception centre in Kokkinotrimithia, in Nicosia, after authorities complete the necessary procedures in Larnaca.

Why does 1.5C warming goal matter to global poverty and health?