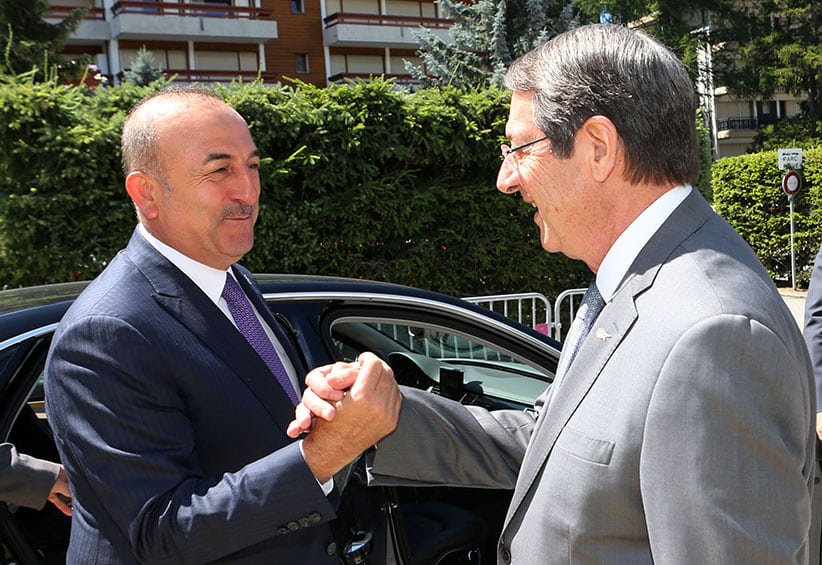 The government on Tuesday confirmed the president had met Turkish Foreign Minister Mevlut Cavusoglu in New York last week, as a debate flared up over the concept of a ‘loose’ or decentralised federation, which has been a long-standing belief held by Anastasiades even before he was elected in office.

Reports of last Sunday week’s meeting emerged following a national council session on Monday during which Anastasiades briefed party leaders of his contacts in New York on the sidelines of the UN General Assembly.

The government initially declined to comment on the issue but on Tuesday government spokesman Prodromos Prodromou was forced to confirm that a meeting had taken place.

“The president did brief the national council about it and in light of the fact that the information has already leaked to the media, we must confirm that such a meeting had taken place in New York,” Prodromou said. “The members of the national council have been informed of its substance and there is no need to make any other comments.”

During the national council meeting, Anastasiades also suggested that maybe the Greek Cypriot side should consider a decentralised federation as a form of solution, a long-standing belief he had voiced at least as far back as July 4, 2010.

At the time, he had given an interview to Kathimerini and was commenting on the way then president Demetris Christofias was handling the reunification negotiations.

“For example, as a party, we don’t agree with over-centralisation just because we supposedly agreed on a strong government in 1977,” he said. “What we support is a strong state that ensures a single international personality, single sovereignty, and not allowing anyone to dispute the status of its statehood. At the same time, however, a decentralised federation, as we call, it is needed, in which, especially the domestic issues relating to daily life, should belong to the regions and not the centre.”

Prodromou later sought to explain what Anastasiades meant by the term, arguing it is a way to make a federal state functional because of the Turkish Cypriot demand for veto powers.

“In light of the Turkish Cypriot side demand for a positive vote at every level of decision-making, the president suggested we could examine the possibility of decentralisation of the system, that is, to the degree possible, keep the necessary powers at the central state,” Prodromou said.

“By transferring powers to the two states we avoid deadlock,” he said.

Prodromou said the aim of Anastasiades’ recommendation was to make people reflect on the viability of the system.

Main opposition Akel warned that talk of a decentralised federation was dangerous and could possibly lead to extremely negative effects.

“This discussion, especially at a time when the UNSG is expected to make his decisions about the future of the negotiations, could torpedo them and lead to consolidation of partition and two states,” Akel spokesman Stefanos Stefanou said in a written statement.

He added that discussion of the concept was dangerous because it gave the impression to international players and the UNSG that the Greek Cypriot side is not being honest when it says it wants to restart talks from where they left off in Switzerland last year.

Stefanou said Anastasiades had raised the matter during Christofias’ term (2008-2013) – the discussion is recorded on the national council minutes.

At the time, Anastasiades had been asked which powers he wanted to remove, but he still has not replied, the Akel spokesman said.

“We hope this time Mr Anastasiades will be in a position to say how many and which agreed powers of the central government – which incidentally Mr Anastasiades has greatly increased during negotiation – is prepared to grant the regions.”

Diko chairman Nicolas Papadopoulos called on Anastasiades to explain what he means with the term.

“I must confess I’m not clear on what president means,” he said. “If we don’t know about what powers we are talking about … no one can form a view.”

Papadopoulos suggested the president raised the matter at the national council for reflection, considering Turkish intransigence, which was worsening.

The Diko leader warned, however, that discussion on the matter could be used by Turkey as a coating for a velvet divorce.

In the north meanwhile, it appeared that Turkish Cypriot leader Mustafa Akinci was being sidelined.

Neither Cavusoglu nor Turkish President Tayyip Erdogan met with Akinci at the UN General Assembly while ‘foreign minister’ Kudret Ozersay has been getting a lot of publicity in recent days.

Ozersay also met ruling Disy leader Averof Neophytou twice in the past month — in New York and Kormakitis — as he appears to be preparing to take over the reigns from Akinci in 2020.

Turkish Cypriot daily Afrika said Akinci was sidelined by Turkey because he did not abandon the position for a bi-zonal bi-communal solution to the Cyprus problem and opposed the “separate state formula.”

Arguing that the negotiations for the Cyprus problem are being held between the Republic and Turkey, the paper notes that Akinci was being pushed out of the process.

Akinci had said he knew of the Anastasiades Cavusoglu meeting, which took place “in order to find out the intentions.”

“We didn’t see much of a problem in that. My objection is for this becoming frequent. If Turkey and the Greek Cypriot side start negotiating That would disturb me. I won’t hide this,” he said.

A house, a home