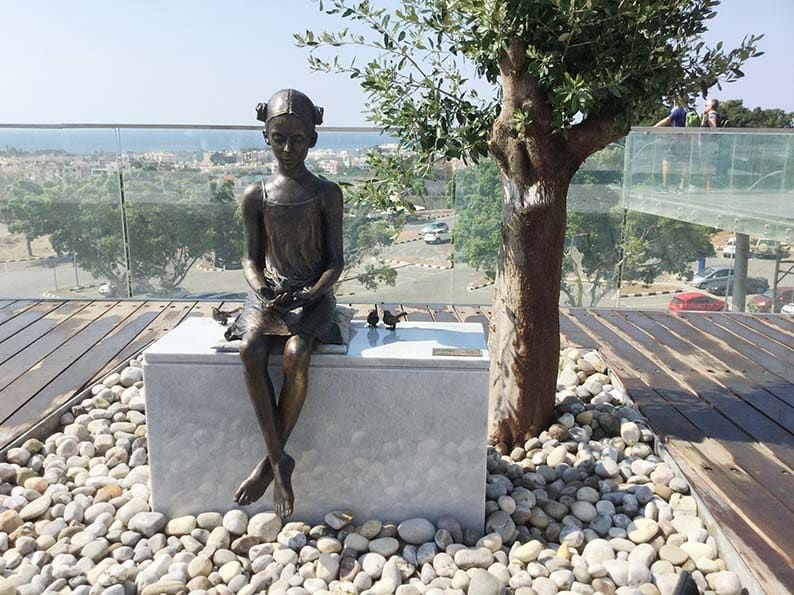 A new bronze sculpture created by Cypriot artist, Yiota Ioannidou, was installed on Tuesday in a recently renovated square in Paphos old town.

With commanding views of the town below and the Mediterranean behind her, a bronze of a child now sits atop a cushion and plinth crafted in marble, holding a sparrow, with others perched beside her, under the branches of a recently-planted olive tree.

After the installation was completed, Ioannidou told the Cyprus Mail on Tuesday: “This is a very special square, its position is unique and I was looking for somewhere particular since my work is taking a direction of art in public spaces.”

‘The girl with a sparrow’ is the third work by the Paphos-born artist to be placed in the town,The Little Fisher Boy and Sol Alter, a homage to Aphrodite, attract hundreds of visitors every day.

Born in Paphos, Ioannidou studied at the School of Fine Arts in Athens, before returning to Paphos, which she loves.

The artist, whose art is her oxygen, she says, added that public art, such as this project, creates an energy in a space and connects the public looking at it, giving a sense of humanity and culture.

“I want people to talk to each other, to feel something when they see a sculpture and to bring families into spaces, to make our senses work, no matter what the subject is. This is the point of public art,” she said.

She added that her goal as an artist was not to decorate a space, but to make a subject speak to the soul of the people.

Ioannidou said that the title of the piece refers to the sparrow that has chosen to sit so carefully in the girl’s hand, as she gently holds it. She chose to include sparrows as an integral part of the piece as they fly freely, are not caged and are beautiful.

“When we see a child we see hope, the next generation and the future,” she added of the piece.

The upgraded square is part of a massive project which has seen millions of euros invested in the centre of Paphos’ old town.

The new tree was included in the artists project and replaces a huge ancient tree that was uprooted by terrible storms in the area last year, and couldn’t be saved.

“Olive trees are traditional, strong, part of our culture and embody peace,” she said.

The sculpture was made with the support of Paphos municipality and has taken the artist ten months to complete.

“I am very happy to see her completed and sitting in her place, I hope it speaks to people and brings them pleasure,” she said.