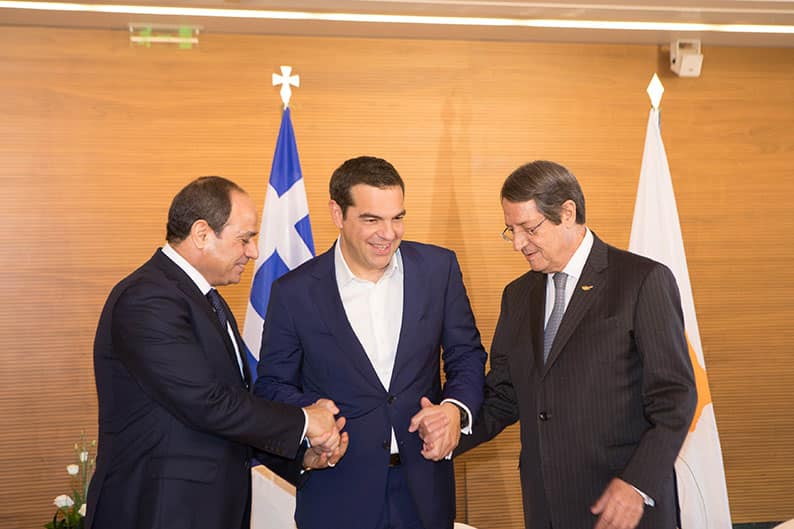 Cyprus, Greece and Egypt on Wednesday called on Turkey to cease all illegal activities within the maritime zones of Cyprus and to refrain from similar actions in the future.

In their official declaration following the meeting, the three leaders reaffirmed their commitment to broaden and deepen their trilateral partnership in various fields of common interest, and to enhance their efforts towards promoting peace, stability, security and prosperity in the Eastern Mediterranean, based on common values and interests.

They also reviewed common challenges faced in the energy field, the need for diversification of energy resources and routes, the security of energy supply and the need to modernise and develop new energy infrastructure, for further promoting trilateral cooperation in the areas of hydrocarbons, electricity and renewable energy.

Strengthening cooperation could be done through a series of agreements on the exploitation and transfer of natural gas, “which further highlights the fact that the discovery of hydrocarbon reserves can serve as a catalyst for regional stability and prosperity”.

The declaration stressed the importance for the respect of the sovereignty, sovereign rights and jurisdiction each state has over its maritime zones in accordance with international law, as reflected in the UN Convention on the Law of the Sea (Unclos) and called on Turkey “to cease all illegal activities within the maritime zones of Cyprus and to refrain from similar actions in the future”.

“Cooperation is based on the well-established principles and rules of international law,” the declaration said, adding that in line with this principle, they were committed to proceeding expeditiously with their own negotiations on the delimitation of their common maritime boundaries where appropriate.

The declaration also referred to ensuring reliable connectivity as a chief challenge in successfully aligning the energy sector with sustainable development and energy security.

“The discovery and future exploitation of significant hydrocarbon fields in the Eastern Mediterranean is of vital importance for the stability of the region. In this respect, enhancement of energy security conditions constitutes the cornerstone of the trilateral energy cooperation,” the declaration said.

Speaking afterwards, Anastasiades said: “What we seek is to create circumstances for cooperation between countries in the region so that both the energy security of Europe and the general security of the region can be attained.”

Tsipras said the three leaders “agreed that international law is the only basis on which to build stable relations between countries in the Eastern Mediterranean”.

“We have clearly expressed our support to Cyprus in its effort to build its sovereign rights under international law and respect its exclusive economic zone,” he added. Al-Sisi said they had discussed the need to tighten their relationships and support various projects.

US officials say China trying to sway US vote