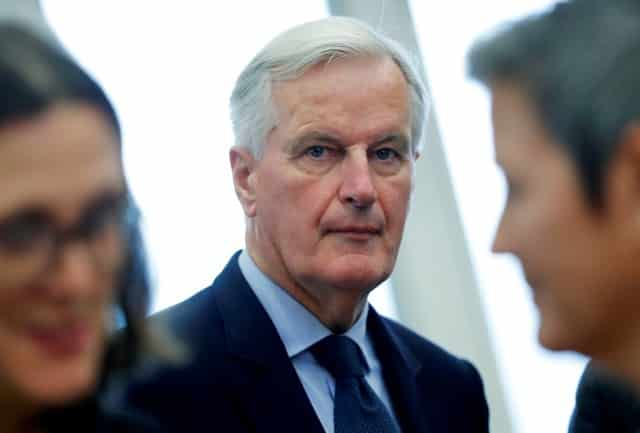 European Union Brexit negotiator Michel Barnier on Wednesday said an agreement with Britain was “within reach”, calling for decisive progress in the talks in time for a summit of all 28 EU leaders next week.

Brexit negotiators from both sides have been locked in intense discussions this week, trying to overcome differences on the biggest outstanding hurdle to a deal – how to keep the Ireland-UK border open after Britain leaves the EU in March.

“An agreement is within reach for Oct. 17, next Wednesday,” Barnier told a speech to small business leaders.

Barnier said Brexit would trigger the need for customs, VAT and compliance checks with EU standards between Ireland and Northern Ireland. He said customs declarations could be filled in advance online and the “only visible systematic checks between Northern Ireland and the rest of the UK would involve scanning the bar codes on lorries or containers, which should be done on ferries or in transit ports”.

For industrial goods, he said it could be done by “market surveillance authorities” in company premises. But he said checks on animals and animal-derived products would still have to take place on the border and cover all of that trade.

“Our challenge is to make sure that these procedures are as easy as possible and not burdensome, particularly for small and medium business,” he said in his speech in the European Parliament, which ended in a standing ovation.

Barnier said he realised such checks – vehemently opposed by the Democratic Unionist Party (DUP) in Northern Ireland, which props up British Prime Minister Theresa May’s government – were politically difficult but said it was the consequence of Britons voting to leave the EU.

The 27 EU states will get an update on the negotiations at a meeting of national ambassadors, without Britain, on Friday evening. The sides will continue negotiations through the weekend with hopes for a breakthrough as early as Monday.

The 27 EU leaders meeting next Wednesday and Thursday in Brussels want to be able to announce decisive progress on the Brexit deal to agree to hold another summit in November. That would be to finalise work on a declaration of close future ties with Britain that would also be part of the Brexit package.

“Barnier and his team are working day and night to reach a deal, but we are not there yet,” EU Migration Commissioner Dimitris Avramopoulos told a separate news conference.

The issue of how to avoid extensive checks at the border between EU state Ireland and the British province of Northern Ireland – Britain’s only land frontier – after Brexit is the last remaining hurdle, with nearly everything else in the withdrawal agreement agreed before Britain leaves next March.

Both the EU and Britain have signalled progress in recent days, boosting sentiment in markets, which fear the most damaging no-deal Brexit.

“There is a smaller probability for lack of deal now than we have had for some time,” Danuta Hubner, a European Parliament lawmaker dealing with Brexit, told a committee sitting.

But the Commission also looked at preparations among the 27 states for a no-deal scenario on Wednesday, discussing multiple disruptions that would ensue, including customs checks and duties kicking in immediately on all imports and exports.

“We are working hard for the Brexit negotiations to succeed. But since we can’t guarantee the result right now, we have to prepare for all possible outcomes,” one diplomat said. “The EU27 need to be ready on day one to address issues like citizen’s rights, transport or customs coherently.”

Messi’s life to be portrayed in Cirque du Soleil show