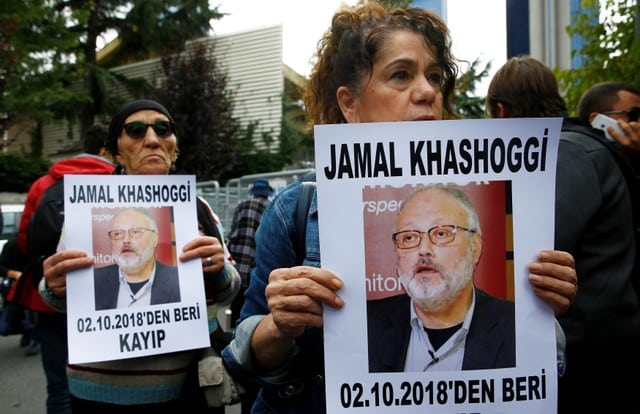 Human rights activists hold pictures of Saudi journalist Jamal Khashoggi during a protest outside the Saudi Consulate in Istanbul, Turkey

President Donald Trump said on Wednesday he has talked to officials in Saudi Arabia at the highest levels about the disappearance of Saudi journalist Jamal Khashoggi and wants the United States to get to the bottom of the matter.

Khashoggi, 59, disappeared a week ago and was last seen entering the Saudi consulate in Istanbul where he went to pick up a document he needed for his planned marriage. Saudi officials have said that he left the consulate but his Turkish fiancée, Hatice Cengiz, who was waiting outside, said he never appeared.

Turkish sources have said they believe Khashoggi, a prominent critic of Saudi policies, was deliberately killed and removed from the building. Saudi Arabia has strongly rejected the allegations.

Trump said the United States was working closely with Turkey to find out exactly what had happened and was seeking information from Saudi Arabia.

“We’re demanding everything. We want to see what’s going on,” Trump told reporters. “It’s a very serious situation for us and for this White House.”

“I want to see what happens and we’re working very closely with Turkey and I think we’ll get to the bottom of it,” Trump said.

Khashoggi left Saudi Arabia last year saying he feared retribution for his criticism of Riyadh over the Yemen war and its crackdown on dissent, and since then wrote columns for the Washington Post.

Turkish President Tayyip Erdogan has urged Riyadh to prove its claim that Khashoggi left the consulate after his meeting there.