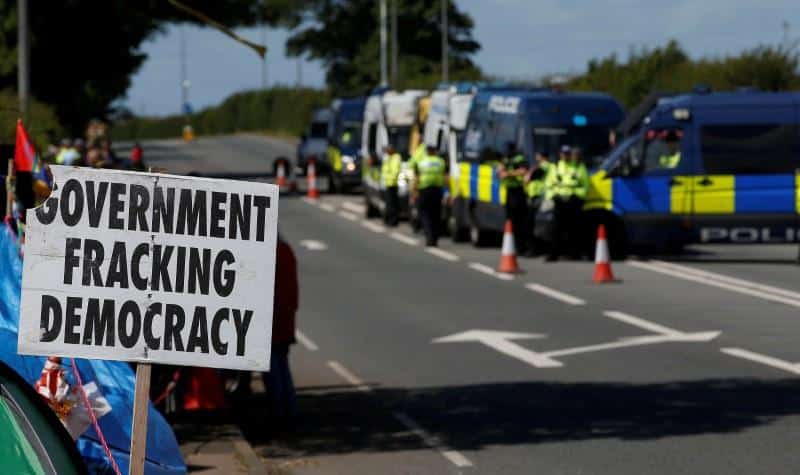 An appeal has been lodged against the ‘excessive and extraordinary’ punishments received by three anti-fracking protesters in the UK, among them Cypriot environmental activist Richard Loizou, the Guardian has reported.

On September 26, Loizou, 31, received a sentence of 15 months, while Simon Roscoe Blevins, 26, and Richard Roberts, 36, were given 16 months in prison after being convicted of causing a public nuisance by a jury at Preston crown court in August.

The three environmental activists are considered to be the first people to receive jail sentences for anti-fracking action in the UK.

In view of growing anger over their “excessive and extraordinary” punishments, the environmental activists announced on October 5 that they would be lodging an appeal against their sentence, according to the Guardian.

The activists were charged after climbing on top of trucks carrying drilling equipment to the Preston New Road fracking site near Blackpool during a four-day action protest.

This action followed a series of protests that have been taking place near Preston New Road since the government gave the energy firm Cuadrilla the go-ahead to extract shale gas at two wells on the site in October 2016, overturning a decision by Lancashire county council.

More than 300 protesters have been arrested since Cuadrilla began constructing a fracking pad at the site in January 2017, the Guardian said.

In the court indictment, judge Robert Altham said “each of them remains motivated by an unswerving confidence that they are right” and therefore considers them at risk of reoffending.

“Even at their trial they felt justified by their actions. Given the disruption caused in this case, only immediate custody can achieve sufficient punishment,” he said.

In a video message as they were waiting to be relocated to jails elsewhere in the UK, Loizou said that “we will win, because this is a last-ditch attempt to squeeze the remaining fossil fuels from the earth. It is like industry clinging on to an old paradigm of the way things operate.”

Kirsty Brimelow QC, the head of the international human rights team at Doughty St Chambers, who is leading the appeal on a pro bono basis, told the Guardian that “we are applying to the court of appeal for expedition of the appeal… The core submission in this case was made at Preston crown court – that it is wrong to lock up peaceful protesters.”

The activists have seen a wave of solidarity following their arrest. On October 3, more than 20 MEPs from the Greens/European Free Alliance group stood together at the European parliament expressing their solidarity with the group. Also, more than 1,000 academics have signed a letter calling for a parliamentary inquiry.

Hundreds of supporters of the three environmental activists demonstrated on October 6 outside the prison where they are being held after the appeal against their imprisonment was lodged.

While fracking is effectively banned in countries including Germany, France, Scotland and Ireland, the UK government announced plans earlier this summer to make it easier for companies to obtain permission to carry out exploratory drilling in England, the Guardian reported.

Remand for suspect in robbery and kidnapping case