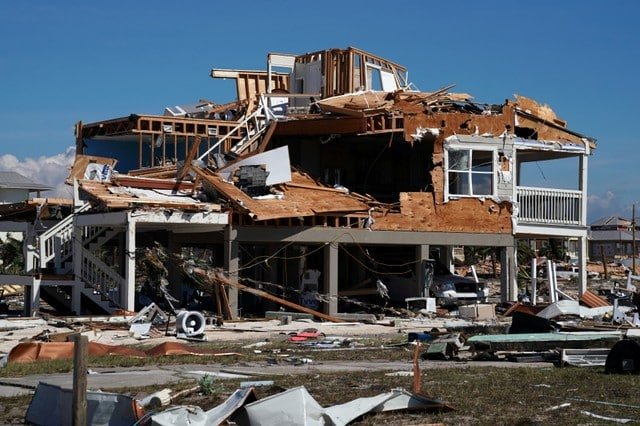 A home that has been destroyed by Hurricane Michael

Hurricane Michael’s violence was visible on Thursday in shattered Florida coastal towns, where rows of homes were ripped from foundations and roofs were peeled off schools by the near-record-force storm blamed for six deaths.

Michael smashed into Florida’s northwest coast near the small town of Mexico Beach on Wednesday with screeching 155 mile per hour (250 kilometer per hour) winds, pushing a wall of seawater inland.

“The wind was really tearing us apart. It was so scary you’d poo yourself,” said retiree Tom Garcia, 60, who was trapped inside his Mexico Beach home as water poured in to waist height.

He and his partner Cheri Papineau, 50, pushed on their door for an hour in an effort to stop the storm surge bursting in as their four dogs sat on top of a bed floating through their home.

Video shot by CNN from a helicopter showed homes closest to the water in Mexico Beach had lost all but their foundations. A few blocks inland, about half the homes were reduced to piles of wood and siding and those still standing had suffered heavy damage.

Michael, the third most powerful hurricane ever to hit the U.S. mainland, weakened overnight to a tropical storm and pushed northeast on Thursday, bringing drenching rains to Georgia and the Carolinas, which are still recovering from Hurricane Florence last month.

The injured in Florida were taken to hospitals in Tallahassee, with some hurt after the storm by breaking tree limbs and falls, said Allison Castillo, director of emergency services at the city’s Capital Regional Medical Center.

Anastasiades ‘not shifting the goalposts’ he says

Buyer goes ahead with purchase of shredded Banksy painting