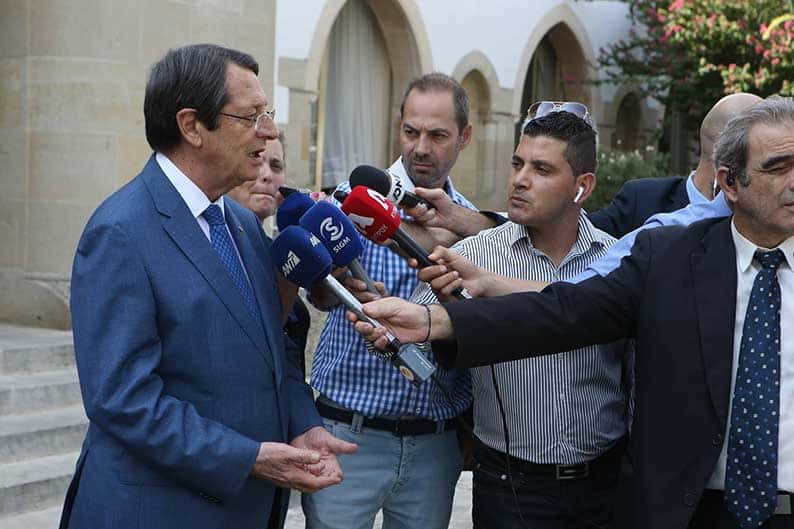 President Nicos Anastasiades on Friday announced he is to have a casual meeting with Turkish Cypriot leader Mustafa Akinci later in the month.

The announcement came after his meeting at the Presidential Palace with the UN Secretary-General’s envoy in Cyprus Elizabeth Spehar.

The meeting will be without an agenda, he said, as neither him or Akinci want to give the impression that the dialogue is being relaunched “without proper preparation or knowing which issues to discuss”.

“We will simply – as leaders of the two communities – exchange thoughts, concerns on our prospect, our future and how we can find the way so that the sought-after solution is functional, viable and provides prospects to the entire Cypriot people,” Anastasiades said.

He said that Spehar conveyed to him that Akinci is eyeing positively his proposal for a meeting, which will be arranged by the UN within the coming days, after his return next week from Brussels.

Anastasiades had said last week that he had asked Akinci for a casual meeting when the latter had called him on his birthday but that Akinci turned down the invitation.

“The reply was that he did not want to give the impression that the talks were being relaunched,” Anastasiades had said.

Following reactions and concerns raised as to whether the government would shift its policy on the Cyprus problem after the president expressed his idea of a loose federation to the National Council on Monday, Foreign Minister, Nicos Christodoulides, has been giving reassurances that this would concern only the powers of the central government.

Christodoulides shot down all claims that Anastasiades was toying with the idea of a confederation.

“I am surprised by the reactions, we are not discussing changing the basis of a bizonal bicommunal federation,” Christodoulides told Politis radio on Friday.

To have a confederation, he said, the Republic of Cyprus must recognise the ‘Turkish Republic of Northern Cyprus’. “There is no such issue, not even as a thought,” Christodoulides said.

No Greek Cypriot politician could ever do this, he said, adding that Anastasiades had expressed this idea before the National Council, as “food for thought”, as, it could be a way out of the deadlock as regards the talks.

“What brought about this need was our intense desire for a dialogue to be relaunched, because the current situation cannot be a solution to the Cyprus problem,” he said.

The proposal, he said, aims to address one of the most basic disagreements at the negotiating table at the moment, “concerning the wish of our Turkish Cypriot compatriots for a positive vote on all issues in the executive.”

“The Turkish Cypriots see this as part of political equality, we do not see it as such, there are authorities that have been agreed concerning the central government on which the positive vote cannot apply,” he said.

He gave as an example the Securities and Exchange Commission, which is being run by a council appointed by the government and takes decisions based on a framework also set as per EU rules and regulations.

The demand for one Turkish Cypriot positive vote does not apply in this case, he said, as, “it has nothing to do whether one is Greek Cypriot or Turkish Cypriot.” He added that 70 per cent of the all powers of member states come from decisions of the EU.

“References to decentralised powers concern the powers of the central government only. We are not trying to reset the talks,” Christodoulides said.

He said that the UN Secretary-General is to inform the UN Security Council next week of the prospects of a relaunch of talks for the settlement of the Cyprus problem, based on that the report of his special envoy Jane Holl Lute.

Christodoulides expressed optimism that the UNSG’s opinion would be positive for a relaunch of the talks.

The two leaders met last April at an informal dinner hosted by Spehar, at the Chief of Mission’s residence in the buffer zone. It was their first meeting since the collapse of the talks in Switzerland in July 2017.