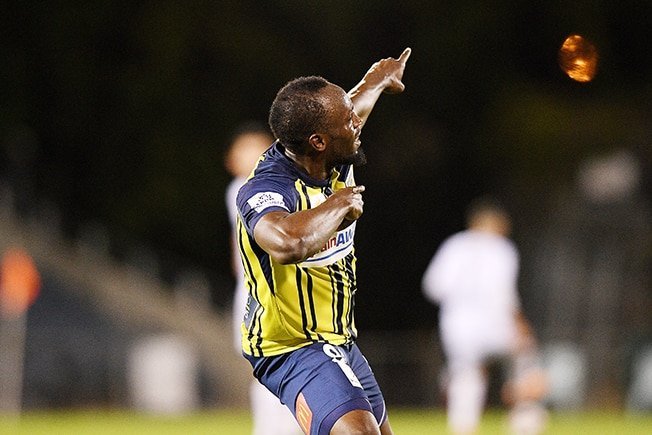 Usain Bolt said opening his Central Coast Mariners account was “a weight off his shoulders” as the world’s fastest man bagged a second-half brace in a 4-0 win.

The 32-year-old, on an indefinite trial with the Australian A-League club, made his first start in a pre-season friendly against Macarthur South West United.

And the Jamaican did no harm to his dreams of becoming a professional footballer with two goals in 20 minutes to put the result beyond doubt in front of around 6,000 fans at the Campbelltown Sports Stadium.

His first was a calmly-taken strike, muscling off a defender and slotting the ball past Eze Consoni in the Macarthur goal. His second showed off signs of a striker’s instinct, taking advantage of a horrible mix-up between defender and goalkeeper to tap in from a couple of yards out.

Speaking after the game about his opener, he said: “It was brilliant. It takes all the weight off your shoulders, it relaxes you.

“I’d missed one earlier which I was not happy with myself (about), but when scoring it was just a great feeling.

“I’ve been working, I’ve been trying to get fit and play over 45 minutes so for me I think I did pretty well and I am happy with the progress I am making.”

Bolt started for the Mariners wearing the 95 shirt – a reference to his 100m world record time of 9.58 seconds – having previously come on for the last 20 minutes in a game against a Central Coast Select XI last month.

The first 45 was slow for Bolt, but not the Mariners as on-loan Aston Villa striker Ross McCormack and Jordan Murray put the side 2-0 up at the break.

The eight-time Olympic champion was sprightlier in the second half and was able to break out his trademark Lightning Bolt celebration on 57 minutes after being played in by McCormack and beating the goalkeeper at the near post.

But Bolt is still under no illusion about the difficulties in turning from track star to top striker.

“Everything,” he said when asked about what he needs to improve on.

“I think my position is much better, I think I’m doing much more in space.

“Controlling the ball, seeing the field and having better vision is my two poorest areas. It has improved a lot since I have been here but it could improve a lot more.”

Bolt made way in the 75th minute with the game settled, applauding the fans as he made his way to the sidelines before signing autographs on the touchline as the game fizzled out.

Head coach Mike Mulvey said: “You’ve got to be so happy for the guy, haven’t you?

“He covered himself in glory tonight and everyone is super pleased for him. You’ve got to take your hat off to him.”