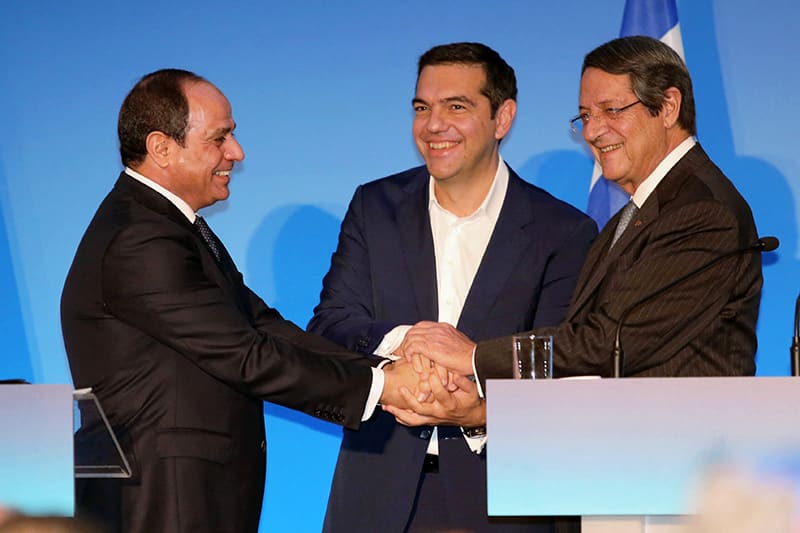 Cyprus and Greece lashed back at Turkey on Saturday after Ankara said it was ‘dismayed’ by the joint declaration at the trilateral summit between the two countries and Egypt held in Crete on Wednesday.

Turkey’s foreign ministry said on Friday evening that they were ‘dismayed’ by the joint declaration and that claims against the country were unwarranted, as the statement disregarded the “atrocities committed by Greek Cypriots against the Turkish Cypriots between 1963-1974.”

He added that the 1960 Treaty of Guarantee, which Turkey said in their statement was the cause for the ‘peace operation’ in 1974, was outdated, and should instead be replaced by the framework UN Secretary General Antonio Guterres set out following Cyprus talks in Crans-Montana last July.

“One of the parameters set by the Secretary General sets a goal of establishing a modern security system, which respects the independence of our country, without its guardianship from abroad through guarantees or other interference in its internal affairs,” Prodromou said.

He added that the President Anastasiades, who attended the summit on Wednesday with Greek Prime Minister Alexis Tsipras and Egyptian President Abdel Fattah al-Sisi, is seeking a negotiation process which takes into account all the interests of the Turkish Cypriots and Greek Cypriots.

“The Greek government completely supports Cyprus’ sovereign rights to utilise its EEZ in whatever it sees fit, regardless of any third country’s threat,” Rigas said.

He added that the trilateral alliances are important in safeguarding both Greece’s and Cyprus’ national interests, and also for strengthening their geopolitical role in the Mediterranean region.

The cooperation between the two countries with other partners such as Israel and Egypt are examples of friendships between the countries and of respect for international law, he said.

On Friday evening, however, Turkey said it was ‘dismayed’ with the declaration.

It said Greece, Cyprus and Egypt had attributed the Cyprus problem to the ‘peace operation’ of 1974.

“Within this context, Turkey will resolutely continue to preserve its rights and interests emanating from the fact that Turkish Cypriots are co-owners of the island,” Ankara said.

Turkey added that those trying to detriment the legitimate rights and interests of Ankara and the ‘TRNC’, “will never achieve their goals.”

Regarding Turkey’s threats, Rigas said Cyprus’ energy plans were not only an economic matter, but also a matter that affects the European Union.

“Obstructing energy explorations and the exploitation of energy resources in Cyprus’ EEZ would represent a threat to the EU’s energy safety,” he said.

Rigas added that he estimates the interested parties would not allow for such a development.

Asked if there is a possibility of the US Navy being present during ExxonMobil’s drillings in Cyprus’ EEZ, Rigas said that the US, as well as France, have declared their active support of the Republic of Cyprus and the unobstructed exploitation of its energy resources.

“The presence of the US Navy in the Eastern Mediterranean is quasi-constant because of the geostrategic importance this region has for the United States. I cannot assert whether there is a connection between US presence in the region and the drillings in Cyprus’ EEZ, but I can say that there is no official request on our part for US Navy assistance,” Rigas said.

He also expressed the hope that Turkey will not display provocative behaviour, as such a stance would undermine its own interests and its European prospect.

On Wednesday, Cyprus, Greece, and Egypt all called on Turkey to cease all illegal activities within the island’s maritime zones, and to refrain from such actions in the future.

Their trilateral declaration stressed the importance for the respect of the sovereignty, sovereign rights and jurisdiction each state has over its maritime zones in accordance with international law, as reflected in the UN Convention on the Law of the Sea (Unclos).

“The discovery and future exploitation of significant hydrocarbon fields in the Eastern Mediterranean is of vital importance for the stability of the region. In this respect, enhancement of energy security conditions constitutes the cornerstone of the trilateral energy cooperation,” the declaration said.