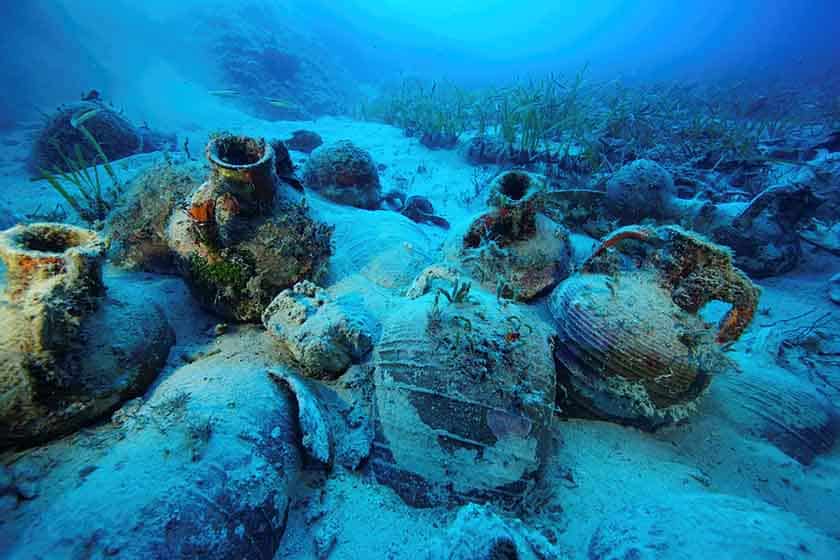 Archaeologists in Greece have discovered at least 58 shipwrecks, many laden with antiquities, in what they say may be the largest concentration of ancient wrecks ever found in the Aegean and possibly the whole of the Mediterranean.

The wrecks lie in the small island archipelago of Fournoi, in the Eastern Aegean, and span a huge period from ancient Greece right through to the 20th century. Most are dated to the Greek, Roman and Byzantine eras.

Although shipwrecks can be seen together in the Aegean, until now such a large number have not been found together.

Experts say they weave an exciting tale of how ships full of cargo travelling through the Aegean, the Mediterranean and the Black Sea met their fate in sudden storms and surrounded by rocky cliffs in the area.

“The excitement is difficult to describe, I mean, it was just incredible. We knew that we had stumbled upon something that was going to change the history books,” said underwater archaeologist and co-director of the Fournoi survey project Dr Peter Campbell of the RPM Nautical Foundation.

The foundation is collaborating on the project with Greece’s Ephorate of Underwater Antiquities, which is conducting the research.

When the international team began the underwater survey in 2015, they were astounded to find 22 shipwrecks that year. With their latest finds that number has climbed to 58, and the team believe there are even more secrets lying on the seabed below.

“I would call it, probably, one of the top archaeological discoveries of the century in that we now have a new story to tell of a navigational route that connected the ancient Mediterranean,” Campbell told Reuters.

The vessels and their contents paint a picture of ships carrying goods on routes from the Black Sea, Greece, Asia Minor, Italy, Spain, Sicily, Cyprus, the Levant, Egypt and north Africa.

The team has raised more than 300 antiquities from the shipwrecks, particularly amphorae, giving archaeologists rare insight into where goods were being transported around the Mediterranean.

“Ninety per cent of the shipwrecks that we found in the Fournoi archipelago carried a cargo of amphorae.

“The amphora is a vessel used mainly for transporting liquids and semi-liquids in antiquity, so the goods it would be transporting were mostly wine, oil, fish sauces, perhaps honey,” archaeologist and Fournoi survey project director Dr George Koutsouflakis from the Ephorate of Underwater Antiquities, said. Fish sauce from the Black Sea region in antiquity was an expensive commodity, he added.

They were particularly excited by amphorae they found originating from the Black Sea and north Africa in shipwrecks from the late Roman period, as it is rare to find cargo from these regions intact in shipwrecks in the Aegean, said Koutsouflakis.

Bad weather is the most likely explanation for why the ships all sank in the same area, he said. The region experiences lots of sudden, fierce squalls and is surrounded by rocky shores.

Fournoi was a stoppover point for ships to spend the night during their journey.

“Because there are narrow passages between the islands, a lot of gulfs, and descending winds from the mountains, sudden windstorms are created.

“It is not a coincidence that a large number of the wrecks have been found in those passages…if there is a sudden change in the wind’s direction, and if the captain was from another area and was not familiar with the peculiarities of the local climate, he could easily end up losing control of the ship and falling upon the rocks,” said Koutsouflakis.

In later times Fournoi was considered a pirate’s haven, said Campbell. Pirates were drawn to the area by the abundant flow of vessels laden with rich cargo. Although weather was believed to be the primary reason for the sinkings, piracy may have contributed in some cases, he said.

The condition of the shipwrecks vary. Some are well preserved, others are in pieces after the ships crashed on the rocks.

“We have wrecks that are completely virgin. We feel we were the first ones to find them, but they are in very deep waters – at a depth of 60 metres. Usually from 40 metres and below we have wrecks in good condition. Anything above 40 metres has either lost its consistency or has been badly looted in the past,” said Koutsouflakis.

The survey team discovered the shipwrecks from sightings by local sponge divers and fishermen.

Fournoi is made up of 20 small islands, islets and reefs between the larger Ikaria, Patmos and Samos islands. The population does not reach more than 1,500, mainly located on the main island of Fournoi.

The team, which includes archaeologists, architects, conservators, and divers, want to create a centre for underwater archaeology in Fournoi for students, as well as a local museum to house their finds.

Scourge of marine pollution in focus

Man remanded in connection with thefts from cars (updated)