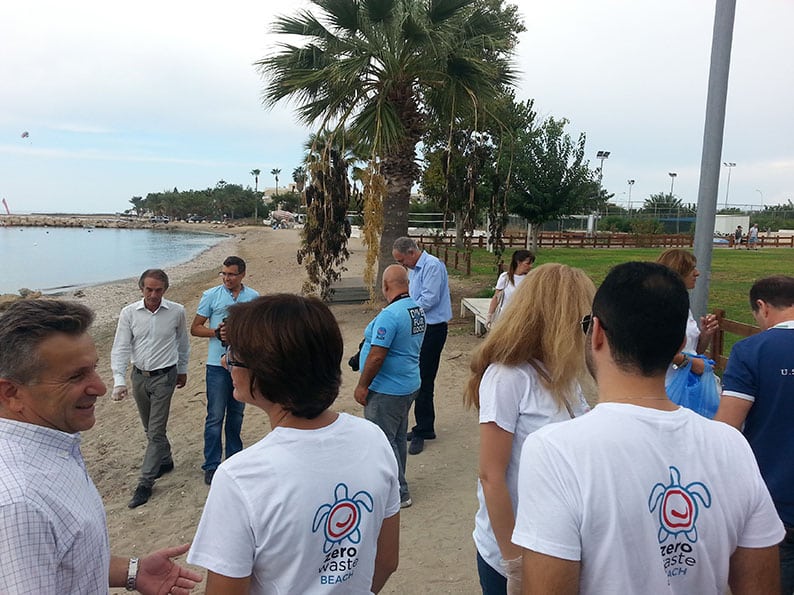 Officials and volunteers gather at the launch (CNA)

A PILOT programme to raise awareness and collect data of marine pollution is underway in Paphos.

The pilot scheme started a week ago, and in that time huge amounts ‘beach’ waste have already been collected, according to Xenia Loizidou, of Akti, an NGO that has teamed up with Geroskipou municipality and Kissonerga community board for the project.

Loizidou told the Cyprus Mail on Friday that Akti Project and Research Centre launched the project ’Zero waste beach’ which is supported by Coca-Cola Foundation, in an attempt to tackle marine litter. Coca-Cola, recently committed to collect and recycle 100 per cent of its packaging by 2030, and new packs would contain around 50 per cent recycled material.

“This is an international project and has the chance to have a big environmental impact and aims to reduce marine plastic pollution. As part of this we have installed 50 bins along the coastal footpaths and pedestrian walkways in both Geroskipou and Kissonerga and volunteers are collecting this waste daily which is then taken to the Green points,” said Loizidou.

The aim is that pedestrians, runners and others using these areas will place their plastic waste, such as drinking water bottles, in the bins.

The head of Kissonerga community council, George Stylianou, said that the area takes the top spot of recycling on the island. “We recycle the most per head, around 14 kilos for each person for the last quarter measured this year,” he said.

Stylianou puts this down to actively supporting, informing and educating residents about recycling. Every Friday, Green Dot picks up recyclables from doorsteps, he added.

“We also increased our beach cleaning and the council believe that raising awareness is imperative. We need to help people to recycle. We are part of this scheme as we want to encourage people to control plastic waste, especially at the beach” he said.

Loizidou noted that in the first three days of the scheme, 200 kilos a day of recycling material has already been collected from the bins. “This is an off-season time as well,” she said.

“There is no real data available in Cyprus, so there is no way to plan policies or activities, this programme will help that. We hope that the data will show that such schemes can be done,” Loizidou added.

She said some municipalities have tried similar actions in the past, but that they proved expensive. The pilot programme will last until the middle of December, allowing for statistics to be collected.

Akti Project and Research Centre is a non-governmental, non-profit organisation based in Nicosia and established in 2000 by a group of experts in environmental issues. It has created an extensive network of collaborators and volunteers that raise environmental awareness and promote sustainable development.

Marine litter is a growing global challenge and plastic has been recognised as the most abundant and persistent form of marine litter globally. “Although we rely on coastal tourism, there is little information on the amount of litter found on beaches, floating in the waters or found on the seabed, and its possible effect on tourism,” Loizidou said.

She noted that clean beaches were a priority for the survival of the island.

“Research by Akti in the summer of 2016 and 2017 on 10 Blue Flag beaches in Cyprus found that although the beaches are cleaned daily by local authorities, there are still important quantities of litter found on them.”

These are mainly cigarette butts, plastic straws and small pieces of plastic, particularly from food wrappings.

At a press conference on Friday concerning the scheme, CNA reported that the minister of agriculture, Costas Kadis, said that in a few months an exhibition space would be created in Paphos to help raise public awareness about marine litter.

The minster also noted that a number of steps are being taken to reduce public waste, and that the number of plastic bags in supermarkets has dropped dramatically after a charge for them was recently brought in.

Our View: Education ministry’s new policies based on knee-jerk reactions