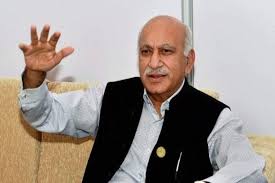 Indian minister M.J. Akbar described multiple allegations of sexual harassment against him as “wild and baseless” on Sunday and added he plans to take legal action against the women who have made the accusations.

The comments by Akbar, 67, follow widespread calls on social media for his resignation from his post as the minister of state for external affairs in the Indian government, after at least 10 women came forward to accuse him of harassment in recent days.

“The allegations of misconduct made against me are false and fabricated, spiced up by innuendo and malice,” said Akbar in a one-page statement given to Reuters partner ANI in India.

The veteran editor, who founded several publications, has been accused of a range of inappropriate behaviour by female journalists who previously worked as his subordinates.

Many journalists have called for Akbar to be sacked and have threatened to boycott events he is attending until he resigns.

The government has remained silent on the issue for days, while Akbar was attending a conference in Nigeria. He returned to New Delhi on Sunday morning to find a crowd of reporters waiting outside his residence.

Akbar said he plans to fight the allegations and questioned if they were politically motivated.

“Why has this storm risen a few months before a general election? Is there an agenda? You be the judge,” he said.

Harinder Baweja, one of the women who has accused Akbar, criticised his response.

“All the women who tried to deal with the trauma for two to three decades and were now encouraged to share their pain, had the general election in mind. How absurd,” said Baweja, a senior journalist with the daily Hindustan Times, on Twitter on Sunday.

Akbar is one of the highest profile figures so far to face accusations in India’s burgeoning #MeToo movement.

The movement that began in the United States in response to accusations of sexual harassment and abuse by powerful men in media and entertainment over a year ago, has picked up pace in India in the last few weeks after a Bollywood actress accused a colleague of inappropriate behaviour on the sets of a film they were shooting in 2008.

Since then, over a dozen men from media, entertainment and the art world have been accused of offences ranging from sexual harassment to rape. Several media organisations have sacked or sent employees on leave in recent days after a string of similar allegations.

In the latest allegation to surface against Akbar, Majlie de Puy Kamp, a New York-based journalist, said Akbar molested her when she was an 18-year-old intern at his newspaper Asian Age in New Delhi in 2007.

“What he did was disgusting, he violated my boundaries, betrayed my trust,” de Puy Kamp told the news website Huffington Post India.

India’s main opposition party Congress has demanded Akbar’s resignation, while Maneka Gandhi, the minister for women and child development, has called for an investigation into the allegations against Akbar.

U.S. student barred by Israel appeals to its top court