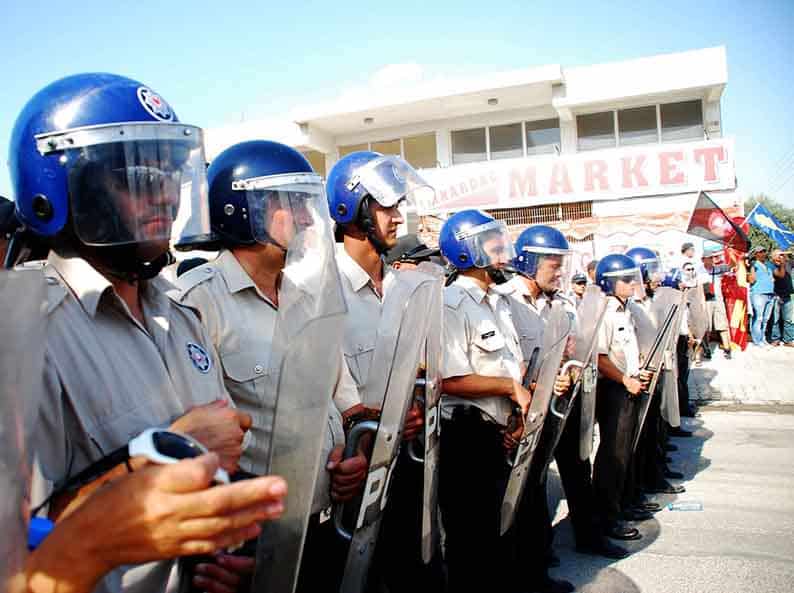 A series of recent murders, robberies and other crimes in the northern part of Cyprus is creating fear among Turkish Cypriots and prompting demands for stricter security measures.

One justice official said this week that in the last year alone criminal court proceedings had risen by 50 per cent.

But stricter security measures in a place where the police are under the command of the Turkish army could turn into a double-edged sword, further curbing personal rights and freedoms, warned senior researcher Mete Hatay of the Prio Cyprus Centre.

The body of an 18-year-old boy was found on the shore in the Famagusta region a couple of days after he went missing. A 53-year-old teacher was found strangled to death with a belt in Trikomo. An exchange bureau in Ayios Dhometios was robbed by a masked assailant. In another masked robbery, assailants stole cash and cheques from a vehicle belonging to a market in Kyrenia after knocking the driver unconscious. A few days later, a group of women coming out of a film screening were sexually harassed and assaulted in the middle of Nicosia.

Shocked by such incidents, Turkish Cypriots have taken to social media expressing their fear and calling for stricter security measures.

Among them was a member of the Turkish Cypriot assembly, who posted a photo on her social media page with a baseball bat on the front seat of her car, saying: “Yes, I have taken my precaution… It’s winter and days are shorter, so I need to feel safe… If steps are not taken to reverse this trend, people will start implementing their own justice.” She had to delete the post after receiving heavy criticism from people who reminded her that it was in fact her duty to make the country safer.

“It is very scary,” chief justice Narin Ferdi Sefik told the daily Kibris Postasi in an interview early this week. “In the past we used to feel very safe in Cyprus… We never had such incidents. Unfortunately, we can’t say that we have a safe environment anymore.” Sefik stated that there has been a 50 per cent increase in the number of criminal proceedings compared with last year.

The media has played up the fact that most of the detained suspects of the recent incidents were Turkish citizens, including a special sergeant with the Turkish armed forces, who had entered the north on a tourist visa.

Newspapers carried headlines such as, “Not a tourist, a thief,” and “They come, they rob, they leave.”

Turkish citizens can enter the northern part of Cyprus using their ID cards instead of a passport on a 90-day visa. Turkish Cypriot authorities have long been criticised over lack of adequate controls at the entry points; the ease with which tourist visas are given; the failure to follow up on those who come as tourists and overstay; or on those who come as workers or students, quit or drop out and end up staying in the country illegally.

The Turkish Cypriot Secondary School Teachers Union KTOEOS made a statement during the week criticising the failure to have adequate checks on who enters the county.

“Crimes like murders of women, child brides, abuses and rapes, which we aren’t used to, are increasing each day. Enough with the flow of population to our small island,” their statement said.

In an interview to daily Yeniduzen, Aysegul Baybars, responsible for interior affairs, explained that they are working on implementing stricter controls at the entry points, a system to register university students and follow up on workers, and short-term tourist visas.

Meanwhile, the Turkish Cypriot assembly on Monday approved a protocol on urban security, which stipulates the installation of surveillance cameras in public places. Tufan Erhurman, the head of the Turkish Cypriot ruling coalition, stated that police numbers need to be boosted while organisational changes need to be made so that the police can deal with the crime rates.

While acknowledging that the rapid demographic change and uncontrolled labour and education sectors are indeed problems that need to be tackled, Prio Cyprus Centre’s senior researcher Hatay warned against moves to increase surveillance and render police more powerful.

“Such moves may pose a risk on individual rights and freedoms and confidentiality of personal life,” said Hatay, adding that Turkey has been pressuring the Turkish Cypriot authorities for some years now to increase surveillance and give more authority to police.

In fact, Turkish ambassador, Derya Kanbay, during a press conference back in August had complained that Turkish Cypriot police can’t legally tap phones and said they had asked for certain legal amendments to make it easier to pursue criminals.

An added concern is that police are under the command of the head of the Turkish Cypriot security forces, which report to the commander of the resident Turkish forces, who in turn reports directly to the chief of staff in Ankara.

“TRNC, where 40 thousand troops are kept for external threats, will now turn into an absolute surveillance community, with cameras and security measures everywhere,” said Hatay.

“These are the demands of Turkey, which itself, has turned into an absolute police state. In view of Turkey, everyone is a terrorist, a traitor, a threat. I am afraid they will reflect this view on north Cyprus now.”

Visiting Cyprus by car: be sure you are not driving a “ticking time bomb”

Tales from the Coffeeshop: Long live the loose federation