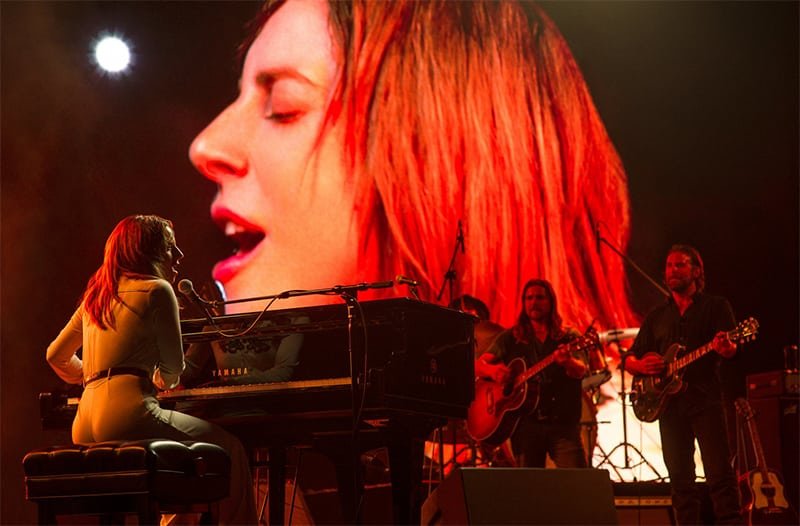 Oscar predictions are a mug’s game – but it’s mid-October, so of course they’re everywhere. At the moment, with a few big titles still to come, the 20 ‘Oscarologists’ at Gold Derby.com give three films the lead in the Best Picture race: Alfonso Cuaron’s memoir of a Mexican childhood, Roma – and two movies showing at the multiplex this week, First Man and A Star is Born, with the latter having the edge for a very simple reason. Showbiz folks love films about showbiz.

We could even say, more specifically, that ‘Hollywood folks love films about Hollywood’ – at least in the first two versions of A Star is Born (1937 and 1954), both of which took place in the movie industry, but the backdrop was changed to music for the third version in 1976 (there’s one every couple of decades, though we seem to have skipped one in the 90s) and remains so in this new version, with Lady Gaga in the role previously played by Barbra Streisand. The plot, in all cases, is identical: burned-out has-been meets, mentors and falls in love with exciting new prospect – and his star falls while hers, inexorably, rises. It speaks to the showbiz fear that fame is fleeting and there’s always fresh meat waiting in the wings, after the Machine has ground you up and spat you out.

I’ve only seen one previous version – the first one, from 1937 – and the biggest change is undoubtedly in the personality of the rising star (Ally, the young singer played by Gaga). No surprise that she’s less deferential than Janet Gaynor played her 80 years ago (I suspect Streisand also had a lot to do with changing the character), but the couple’s dynamic now is almost like a wish-fulfilment fantasy, the plain girl pursued by a white knight. Jack Maine (director-star Bradley Cooper) is a huge star as the film begins, albeit also a secret alcoholic; he pops into a random bar on drag-queen night, just because he needs a drink – he’s instantly recognised, of course – and there, among her cross-dressing comrades, is Ally, belting out ‘La Vie en Rose’ with a touch of Liza Minnelli. He’s smitten, and rushes backstage after the show. She’s unimpressed, or perhaps that’s just the way Gaga plays her.

We need to talk about Lady Gaga – though in fact we can’t, the whole point of the film being that Ally wants to be judged purely on talent, not her looks (about which she’s insecure) or such irritating things as celebrity. If we’re talking talent, Gaga’s voice is big, Whitney Houston-ish and something of a blunt instrument (it doesn’t help that the songs she sings are unmemorable) – but it’s not just about talent, a point the film makes again and again.

Look at Sinatra, says Ally’s dad, he had something unique. You have to sing “so people want to hear it,” muses Jack, trying to pin down the nature of fame. Clearly, the presence one projects is important – and Lady Gaga’s brittle, combative presence lacks vulnerability, at least the way Ally is written. The central dynamic is weird. Jack does all the running, Ally relying on tough love. “We’ll see how long that lasts,” she notes when he says he’s off the booze. “Next time, you can clean up your own mess!” she tells him when he turns up a drunken mess. Even the fact that she sings in a gay bar – recalling Gaga’s gay-icon status – makes her automatically cool, as if she needed extra validation. Gaga’s a much better actress than Madonna (her obvious precursor), but they share the same flaw: that protective pop-star carapace, an inability – or unwillingness – to show weakness.

It’s a flaw because the plot finally hinges on self-sacrifice (no spoilers!), so that first-act imbalance makes the ending less momentous. Oddly, Ally shows more vulnerability as she becomes successful (then again, at that stage it’s not weakness; it’s pathos) – and Jack too loses his early smoothness, growing jealous and desolate. There are moments of pure showbiz, like Jack unexpectedly inviting the still-unknown Ally onstage at his big arena concert to duet on a song she wrote (it’s one of those “You’re going out a youngster but you’ve got to come back a star” moments), and of course she’s paralysed with fear, then goes out and nails it. Above all, A Star is Born deals in the dream that’s made hits of so many TV talent shows: the dream of one person singing so beautifully that others can only watch, enraptured.

There’s a lot of that in the movie. There’s also some musing on celebrity culture, and a few little digs at the music industry. There’s one scene so painful and embarrassing, it embeds itself in your memory. All that said, I didn’t love this well-worn, rather maudlin showbiz fable – maybe because I’ve never really cared very much for celebrity culture, or talent shows, or indeed Lady Gaga. Your mileage may vary, and in fact most people’s does; Best Picture seems a real probability (First Man is too introspective; Roma is in Spanish), with Best Actress also in the bag. The Oscarologists have spoken.