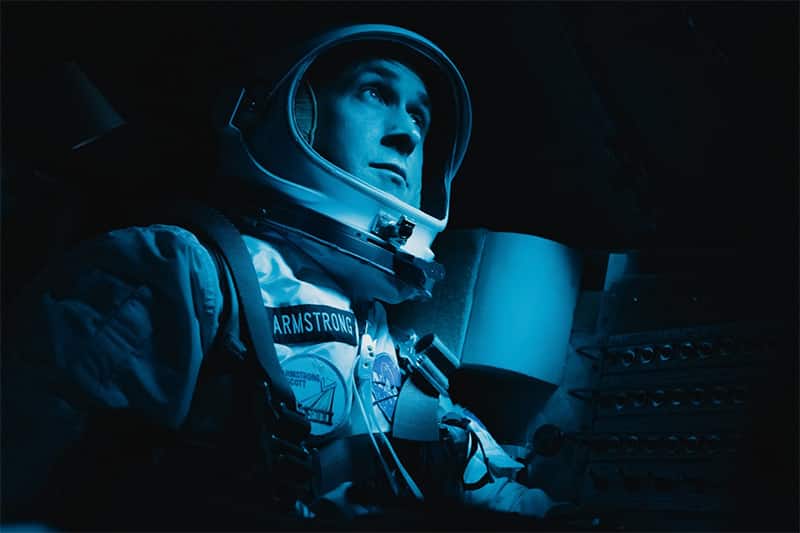 Damien Chazelle makes projects about projects, the gruelling work required to be an artist, or an astronaut – and always adds the small, unspoken rider: ‘Was it worth it?’. It’s easy to miss the note of melancholy in his hugely enjoyable movies; many thought La La Land was escapist, missing the point that the impossible dreams it depicted – whether Love or Hollywood musicals – were impossible as well as dreams. First Man is also quite ambivalent, indeed I’d say there’s no way you can watch the last few seconds of this film and leave the cinema on a fist-pumping high. Given that the ‘first man’ in question is Neil Armstrong (Ryan Gosling) – commander of the Apollo 11 mission, and taker of “a giant leap for mankind” on July 20, 1969 – that could be a problem. Then again, it could be an advantage.

Steven Spielberg is executive producer, but this is not the Moon-landing movie Steven Spielberg would’ve made. It ticks the right boxes but it’s oddly subdued, even flat. When we get a triumphant moment – when a spaceship docks successfully and the team in Houston start to cheer, for instance – it’s instantly qualified: “Stay focused, gentlemen!” cautions someone, damping down the enthusiasm. Armstrong himself is a bit of a damp squib too, a rational, methodical man; you might even call him repressed – especially when it comes to his daughter Karen, who dies in infancy. We see the little girl early on, Armstrong singing her a lullaby (“I see the Moon…” it begins) and noting down her progress in a notebook. Then she dies, and he doesn’t even mention her till the film’s almost over – though the Moon mission, it’s implied, is his way of honouring her memory.

A film that’s driven by a death (and later includes other deaths, as anyone who knows the history of Apollo 11 can tell you) was never going to be a gung-ho crowd-pleaser. Indeed, the whole project of putting a man on the Moon is subtly questioned in First Man. The space race is part of the Cold War, beating the Soviets to the big prize – but by 1968 (seven years after the film begins) society is changing, anti-Vietnam protesters line the streets and many are saying, with good reason, that the money being given to NASA could be better spent on the poor. (Chazelle uses Gil Scott-Heron’s ‘Whitey on the Moon’, though it came out after Apollo.) The project looks iffy from the vantage point of 2018 too, lunar travel having been overtaken by other priorities. At one point, Armstrong notes that space exploration can teach us about our planet, e.g. how thin its atmosphere is – but we know that now, we even know there’s a massive hole in the ozone layer, and it’s still taught us nothing.

Not that First Man is explicitly revisionist; it still contains moments like a cut from the silent vastness of space to a schoolboy raising the American flag. Walking on the Moon is too great a triumph to be simply dismissed. Still, the surface pleasures here aren’t as slick as they were in La La Land (or its predecessor, the ferociously funny Whiplash). There’s a nail-biting opening scene, Armstrong literally ‘bouncing off the atmosphere’ as he pilots a recalcitrant craft – but even the space travel seems to emphasise human fragility more than anything; the Gemini 8 mission feels like being in a tumble dryer, everything shaking uncontrollably, punctuated by whooshing sounds and alarming creaks of metal. It’s easy to agree with Armstrong’s wife Janet (Claire Foy) when she yells at NASA for being just “a bunch of boys making models out of balsa wood”.

Janet’s more combustible than the worried wives in Apollo 13, Armstrong’s family life being a frequent counterpoint to his astronaut exploits. The last thing he does before going on the Moon mission is to sit his children down – at Janet’s insistence – and prepare them for the possibility that he might not come back, a task he carries out with his usual stolid efficiency (“Does anyone have any other questions?”). Earlier, Gemini 8 is intercut with Janet at home, running after naughty kids while Neil clatters about in his tin-can with the stratosphere reflected in his visor. Armstrong, again, is de-glamourised, adding to the film’s stealthy undertow of ‘Was it worth it’? Sure, walking on the Moon is impressive – but what if he’d been killed?

We know he wasn’t, of course – which creates another little issue, viz. that First Man is low on tension. Chazelle takes his cue from his unexcitable hero; the news that Armstrong is to lead Apollo 11 is relayed in a quick, almost throwaway scene, with no great displays of emotion. (“I was pleased,” says Armstrong later when reporters ask how he felt at that moment.) He’s a pro, “a workhorse” as the NASA bosses say approvingly of another astronaut – and this sombre movie holds its nerve all the way to the end, when the lunar module is about to touch down and the camera pans to the surface of the Moon itself: a rocky, unwelcoming expanse, this great culmination of seven years of Neil Armstrong’s time and 130 minutes of ours. Was it worth it, despite the note of melancholy? Yes it was, and in fact because of it.

At least 6 people killed in flashfloods in southern France (V)