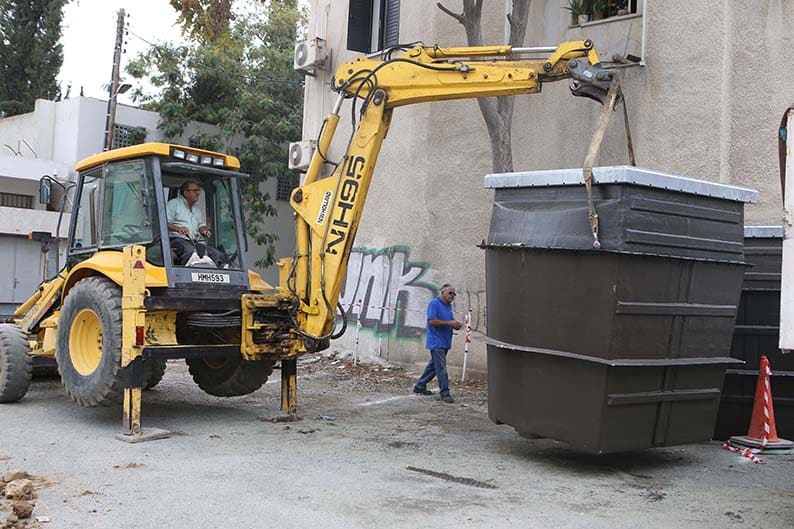 The Nicosia municipality began the installation of underground bins in the older part of town on Monday in an attempt to modernise waste systems and reduce long-term costs.

Three underground refuse collectors, of a massive five cubic metre capacity each, are being installed in four locations in Nicosia’s old city.

The four locations are on Palaion Patron Germanos street, at the end of Vasiliou Voulgaroctonou street, near the Phaneromeni parking and on Ermou street.

“These underground bins eliminate the need for the green skips that are everywhere in the city, and which are often dirty and smell terribly, even though residents pay a fee to the municipality for the cleaning of the bins and skips,” Stavros Constantinou, director of Klinete Ltd which is responsible for the installation of the bins, told the Cyprus Mail on Monday.

The underground refuse collecting system, which is becoming increasingly popular abroad and is already used in many continental European countries and in some areas of the UK, involves bins – often made of steel – which are placed in public spaces and which feed into underground chambers.

While the bins go deep underground, only small intake columns are visible on the surface.

“Underground bins are cheaper in the long-term, as they significantly reduce collection costs since they have much more capacity and do not need to be emptied as often as the skips do,” Contantinou said.

The underground bins which are being installed will be for general waste, while Constantinou said that with time some may be assigned for recycling.

The only issue with the bins being installed, Constantinou added, is that underground bin systems used in other parts of Europe have sensors which inform the municipalities or councils when they are almost full, and specialised trucks with a kind of small crane on the top are sent to empty the chambers.

“The ones being installed now in the old part of Nicosia do not have such sensors, so while we are making some steps towards modernisation, we’re still not going all the way,” Constantinou said.

“We have been installing these bins for the past seven years. There are some currently operating on the road of the presidential palace, though those are of a smaller three cubic metre capacity,” Constantinou said.

Semi-underground containers for general and recyclable waste have also been placed in Limassol’s old port, he said.

Constantinou added that attempts are also being made to persuade municipalities in Limassol of the necessity of underground bins, especially in busy areas such as the beach road, where inadequate recycling bins of very small capacities have been placed, and which are often overflowing with rubbish.