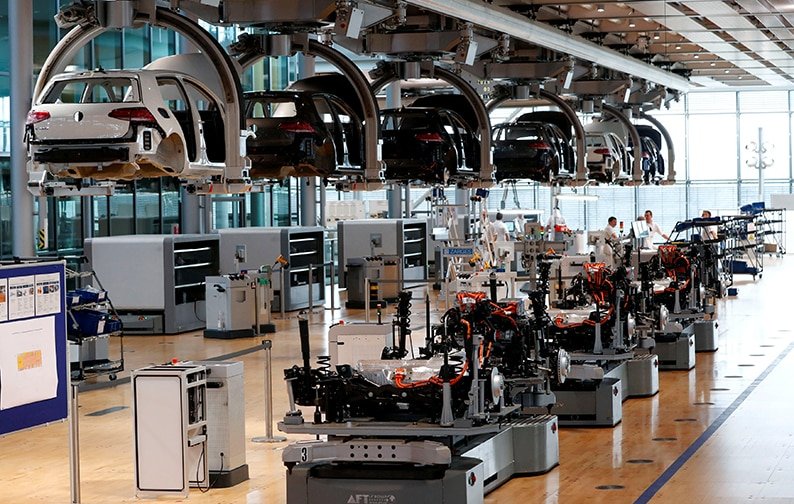 FILE PHOTO: Workers are seen behind e-Golf electric cars during assembly at the new production line of the Transparent Factory of German carmaker Volkswagen in Dresden, Germany March 30, 2017

German carmakers only have a 50 per cent chance of surviving as leading players in the auto industry unless they transform their businesses to meet new regulations and adapt supply chains, Volkswagen’s chief executive said on Tuesday.

“If you look at the former bastions of the auto industry like Detroit, Oxford-Cowley or Turin, you understand what happens to cities when once-powerful corporations and leading industries falter,” CEO Herbert Diess told an auto suppliers’ conference in Wolfsburg, VW’s manufacturing base.

Germany’s auto industry association VDA has said a ban on combustion engine-powered vehicles in 2030 would threaten more than 600,000 German industrial jobs, of which 436,000 are at car companies and their suppliers.

Tougher rules could push some carmakers out of business due to the pace of reforms required to shift production to electric cars and to tackle new geopolitical threats, said Diess.

“From today’s point of view the chances are perhaps 50-50 that the German auto industry will still belong among the global elite in 10 years’ time,” he said, referring to leading players Volkswagen Group, BMW and Daimler.

European Union lawmakers have agreed to seek a 35 per cent cut in car emissions by 2030, a higher level than Germany had sought, after a UN report called for dramatic steps to slow global warming.

Germany’s BMW, Audi and Mercedes brands command around a 90 per cent market share in the premium auto segment, but a push to cut emissions hurts high horsepower vehicles and therefore German brands in particular.

Volkswagen is already struggling to overcome its emissions cheating scandal. Its premium unit Audi was fined 800m euros  on Tuesday for emissions violations.

“We are all used to the fact that we have flourishing industrial metropolises around the central manufacturing plants of German carmakers and their suppliers, places where people like to live and work, but that’s not guaranteed for eternity,” Diess said.

To cut average fleet emissions of carbon dioxide in Europe by 30 per cent by 2030, Volkswagen needs to raise its share of fully electric vehicles to 30 per cent of new car sales, or to half in the event of a 40 per cent cut, Diess said.

The push to cut vehicle carbon dioxide (CO2) emissions, the main greenhouse gas blamed for global warming, is costly and would ultimately lead to a rise in CO2 pollution in Germany given the country’s dependence on generating electricity from brown coal, he said.

The shift from combustion engines to electric cars would also cost 14,000 jobs at VW by 2020, Diess said, requiring an overhaul of the carmaker’s in-house components business.

“It is clear to us all that the structural shift will lead to fewer auto industry jobs in Germany. The question is, how quickly do we need to implement this structural change?,” he said.

Jobs will disappear because it takes less time to build an electric car than a conventional one and because jobs will shift overseas to makers of batteries.

A combustion engine-powered car has 1,400 components in its motor, exhaust system and transmission. An electric car’s battery and motor has only 200 components, according to analysts at ING.

In Europe there are about 126 plants making combustion engines, employing 112,000 people. The largest engine plant in Europe is Volkswagen’s factory in Kassel.

So far German carmakers have sourced battery cells from Asian suppliers like LG Chem and Samsung SDI, which are currently supplying Audi and BMW.

VW is overhauling its in-house components division, which eats up the lion’s share of the 170 billion euros ($197 billion) spent on procurement, develops and builds car parts at 56 sites across the globe, and employs about 80,000 people.

Each of the 56 plants would be free to evaluate partnerships and even to build components for other carmakers, Diess said.