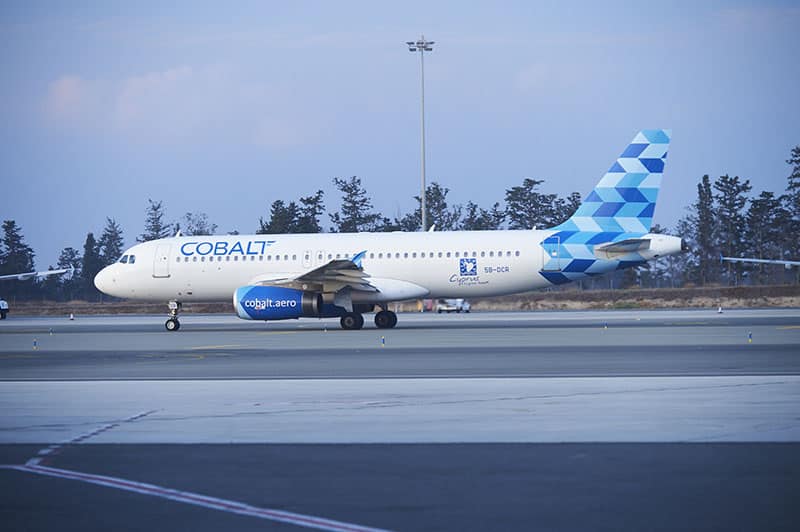 A meeting was being held on Thursday morning to discuss the problems arising from the closure of Cobalt Air at midnight Wednesday.

The Cyprus News Agency said two tour operators were also taking part in the meeting – Top Kinisis and Orthodoxou Travel – and they are expected to assume the transportation of stranded passengers to and from Cyprus.

A Cypriot who was scheduled to fly back from London on Thursday afternoon told the Cyprus Mail Cobalt only sent him a text message asking him to check his email. The email said his flight was cancelled and nothing else.

“I haven’t tried to book, I don’t know how long it’s going to be. I might have to spend an extra night in London,” he said.

Late on Wednesday, Transport Minister Vasiliki Anastasiadou pledged state support for all those stranded either in Cyprus or overseas by the collapse of Cobalt Air, as the airline expressed great regret for the suspension of its operations, saying it was a “sad day” for employees and passengers alike.

Anastasiadou said telephone numbers would be announced soon to help passengers stranded either in Cyprus or overseas.

“The priority for the ministry is to help the people who have been stranded,” she said, adding the numbers would help provide single tickets for travellers to get back to where they started from.

The cost of these tickets, Anastasiadou said, will be covered by the government, the Cyprus News Agency reported. She stressed this only refers to people who are in need of a return ticket only.

A Cobalt statement said that in spite of arduous efforts to keep the airline flying, it was not possible to secure long-term financing.

“It is with great regret that we must inform you that Cobalt Air will cease all operations at midnight on October 17th, 2018 and enter into administration process, after two years and three months of operations,” the statement said.

This, it noted, “is a sad day for all the employees and passengers of Cobalt Air. The company has been working relentlessly during the past months to secure the long-term financing of the airline.”

This is “an enormous disappointment after the incredible hard work and dedication put into building the airline. We would like to express our regret for any inconvenience caused by this sudden decision to all of our passengers.

“The company would like to sincerely thank all its employees for their hard work and dedication, its clients for years of loyal support and its suppliers for their cooperation during the years,” the statement concluded.

Cobalt, the largest Cyprus-based airline, grounded all its flights as of midnight on Wednesday, after reports said that the company failed to reach a deal with a potential European investor.

The Cobalt website instructed passengers who have unused tickets not to go to Larnaca airport or any departure airport on Thursday as no Cobalt flights would be operating and no Cobalt staff would be present.

The transport ministry said in a statement that passengers expecting to fly with Cobalt on Thursday should secure one-way tickets in economy class from another airline, and keep their receipt for their reimbursement.

It was not immediately clear how many passengers would be affected, but nine flights had been scheduled to arrive and a further nine to depart at Larnaca airport on Thursday. In all, the airline flew to 23 destinations.

Cobalt informed the ministry and the Aviation Licensing Authority about their decision late on Wednesday night. The authority called for a meeting on Thursday with the shareholders to discuss the issue.

The company is expected to officially file a stop in operations statement to the ministry on Thursday as well.

According to Economy Today website, the company has only €15 million its accounts, which is expected to be used to pay the employees.

In early October rumours began circulating that the budget airline was facing cash-flow problems after two of its aircraft were grounded for two days, causing delays to certain flights.

Reportedly, the reason was that Cobalt had not paid the monthly leasing fee to the American company that owns the two planes.

The company posted losses for the year 2017.

Civil aviation had been monitoring the airline for some time but reports said that the airline had been consistent with all its payments (salaries, etc) as well as with its aircraft maintenance obligations.

Officially, Cobalt has declined comment. But sources within the company attributed the liquidity problems to a difficulty by Chinese investors to export capital due to Chinese government restrictions.

The airline’s main stockholders are AJ Cyprus, holding 49 per cent of the shares. AJ Cyprus is owned by Chinese Avic Joy Air.

The airline employs around 200 people.

Cobalt stepped in to replace bankrupt Cyprus Airways, which shut down in January 2015.

State doctors urge action on understaffing ahead of Gesy