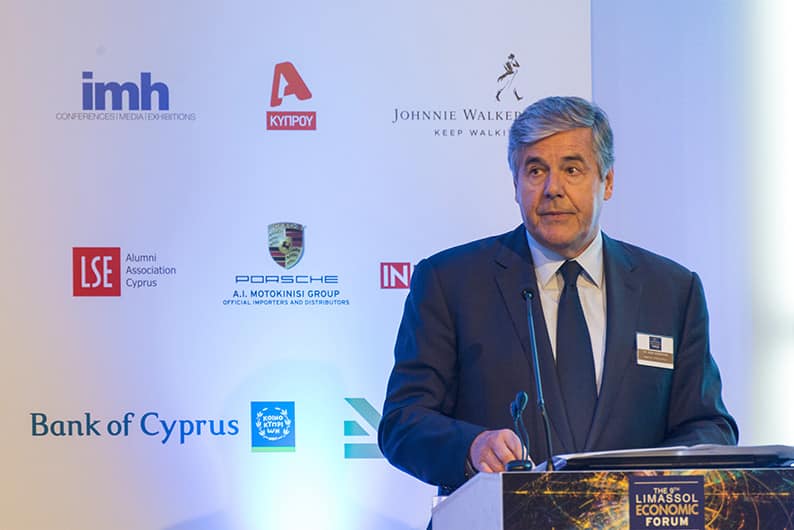 Although the European banking sector is safer now than it was 10 years ago, there is always the risk of another financial crisis, Bank of Cyprus (BoC) chairman Josef Ackermann said on Friday

“Banks are better regulated now, they have come a long way, but they are not safe enough. The reform of the banking sector is incomplete,” Ackermann said in an address to the 9th Limassol Economic Forum.

“Many people agree that there is a risk of a new crisis, though we cannot tell when, where and how it would happen,” he added.

Speakers from both Cyprus and abroad addressed more than 400 senior executives from Cyprus at the Forum, speaking on a range of topics with the goal of improving the current regional economic climate.

Ackermann said that additional EU regulations, such as the Minimum Requirements for own funds and Eligible Liabilities (MREL) would be particularly demanding and damaging for small banks in the EU, including Cyprus.

He referred to the different policy response to the 2009 financial crisis between the US and Europe, which brought the US banks to a better position compared with their European counterparts.
“The American regulatory response was very different from that chosen by Europe, and I think, Europe is paying and will continue to pay a high price for this,” he said.

The Swiss banker said that while the Trump administration in the US was relaxing regulations which tilts the balance of the regulatory burden between the European and the US banking systems further in favour of the latter, local regulators plans to enforce new rules, such as MREL.
MREL, the Minimum Requirements for own funds and Eligible Liabilities, will be particularly demanding and damaging for small banks, including Cypriot banks, he said.

Ackermann noted that European Banks remained vulnerable as reform of the banking sector was incomplete, the arrangements for bank resolution are not yet fully settled while the European Deposit Insurance Scheme has not yet been agreed, due to concerns raised by some key EU countries.

He also called “for a judicious balance between micro-prudential regulations and strict financial stability on the one hand, and consideration of the role banks can and should play in promoting growth on the other,” noting that excessive emphasis on maximising financial stability through new provisions and capital increases could unduly undermine bank profitability and the banking system’s capability to contribute to growth.

He also said there was no evidence of a strong commitment by European policy makers to the global competitiveness of a key industry such as the financial industry, for example by resolutely promoting a common banking market that would make cross-border mergers more attractive. “There is still time for a reversal. But not for long,” he noted. In his welcome address, Finance Minister Harris Georgiades also spoke of the important role of the EU and suggested forming a strong Pan-European banking sector.

“We do need stronger foundations for our banking sector and we need significant consolidation,” Georgiades said. “Pan-European banks would be something I would support. But such steps take time.  And the implementation of the Banking Union should not follow a path of bureaucratic rigidity, but instead a street-smart, efficient and adaptive approach.”

Also speaking was Gavin Hewitt, Chairman of the Forum and former chief correspondent of BBC News, who stressed the importance of Brexit for Cyprus, as nearly 10 per cent of all Cyprus exports are to the UK. He also pointed out the urgent need to adjust to the fact that an increasing number of jobs are lost to the rise in technology, noting that in the past 20 years a huge number of jobs have already been replaced by robots.

In a lively speech titled “Grave New World”, UK economist Stephen D. King addressed globalisation and automation, saying the loss of jobs was one reason the western world was disenchanted with globalisation. “Matters such as automation, which is forever speeding up, are not something which can easily be dealt with by “waving a magic wand”, he warned.

Manfred Bergmann from the European Commission, on a more positive note, mentioned that countries, including Cyprus, have significantly improved their economies. He believes however, the recovery has reached its peak and not enough is done to prepare for worse times. “The sun is shining, but the roof isn’t fixed yet,” is how he put it. “In good times it is time to fix the roof.”

The ninth consecutive year of what is considered to be the biggest and most prestigious business gathering in Cyprus took place at the Four Seasons Hotel. The Limassol Economic Forum is an annual event where the latest trends and developments in global politics and economies in Europe and the Eastern Mediterranean are discussed. The Forum engages political, economic, business and academic leaders alike in wide-ranging presentations.

(CNA contributed to this article)