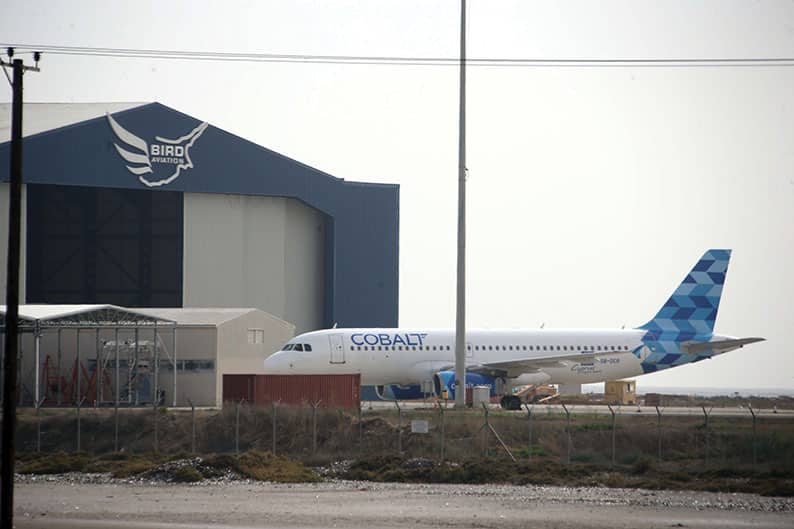 THE decision to pull the plug on Cobalt came directly from the company’s Chinese investors who realised the airline was a money pit after they had already put in €100m, sources have told the Cyprus Mail.

“Cobalt was fully compliant with air safety regulations, and there was no reason why civil aviation should revoke its licence. What’s happened, rather, is that the company grounded itself knowing its Chinese backers would be pumping no more cash into it,” sources familiar with the matter said.

The sources said the writing was on the wall in early October, when a lien was placed on two of the airline’s jets, after Cobalt failed to pay the lease fees on time.

The typical monthly lease on an aircraft is around €500,000.

It was then that Avic Joy Air, the Chinese company holding 49 per cent of the shares, stepped in to bail out Cobalt.

According to industry chatter, the Chinese investors covered not only the outstanding aircraft leases, but also other arrears. It’s said the money-men injected as much as €10m to keep the company afloat.

Apparently that was but a quick fix; rumour has it that Cobalt needed another €30m to tide it over the winter season when revenues typically drop.

And that, the Mail’s sources say, was the last straw for the Chinese investors who realised the company would fast turn insolvent.

“Since its inception, Cobalt has burned through an incredible amount of cash for an outfit its size. The investors in China apparently decided this month that enough was enough.”

The same sources said the airline had been run into the ground by poor management decisions here in Cyprus, but also bad decision-making by the holding company in China.

“Avic are aviation manufacturers, with little experience in commercial airlines. A series of bad decisions were made, and as a result Cobalt was almost from the get-go operating at a loss. They didn’t generate sufficient revenue to cover their losses.”

One strategic mistake, the sources said, was the decision to focus on Cyprus as the primary market, rather than treat it as simply a destination. But the Cypriot market is not big enough.

“You might say that Cobalt has replicated the old Cyprus Airways.”

Following the embarrassment of early October, when two of the planes were grounded, the Chinese are believed to have pledged more money for the slow winter season. But later, they had a change of heart and informed Cobalt that the taps would be turned off.

This prompted the company to approach the Air Transport Licensing Authority (Atla) in Cyprus.

Airline directors have a legal responsibility to inform civil aviation authorities whenever it becomes clear a carrier will be unable to continue operating.

“Strictly speaking, when the decision was taken to ground the airline, Cobalt were saddled with very few arrears or debts to creditors, such as catering suppliers or ground handling. They were up to date with their safety and maintenance requirements, and all staff were being paid normally.

“The problem was that they knew the company had run out of funds, and so they had a duty to inform local authorities in Cyprus. To make it perfectly clear, it was they who approached civil aviation, not the other way around.”

The sources confirmed reports that over the past days talks were underway with Ryanair to take over the airline.

“Ryanair were definitely interested. What they wanted was to acquire Cobalt’s air operator certificate (AOC), because if they did that would greatly expand their routes.

Currently, the sources explained, Ryanair as an Irish-registered company are only allowed to fly to the edge of the EU.

But acquiring a Cyprus-issued AOC would enable them to fly to the Middle East and beyond, because Cyprus has a different air services agreement than does Ireland.

“That’s all Ryanair wanted: the routes. They didn’t care about the planes, or even having to cover some losses. Plus, since they already have a proven air safety compliance record, they could have got the new AOC approved within a matter of weeks, rather than the months or years it normally takes a new airline to apply for a certificate from scratch.”

That was why Cobalt’s executive chairman Grigoris Diakos appealed to the licensing authority to only suspend the airline’s AOC rather than revoke it. By suspending it, the AOC would be kept ‘live’ and could have been transferred to the new owners.

“It seems, though, there just wasn’t enough time to clinch a buyout deal with Ryanair,” the sources speculated.

That said, they did not rule out civil aviation reinstating Cobalt’s licence should the two companies come to an agreement even at this late hour.

This information appeared to be confirmed by Alecos Michaelides, permanent secretary of the transport ministry.

He told the Cyprus News Agency that at a meeting held this week, airline officials failed to convince the licensing authority they could pull a rabbit out of a hat.

Michaelides said Cobalt officials insisted they were close to signing on the dotted line with new investors.

“They claimed that one investor signed, but didn’t put up the money at the last moment, and so on. They insisted they had many interested parties and the like.

“But this was all vague talk. From an audit of the company accounts, it appears that over the last three years they have accumulated €30m in losses a year. Up until today, the investors from China have invested some €100m. So, what prospects could the company possibly have?”

Our View: Anastasiades seems to be advertising his political superficiality