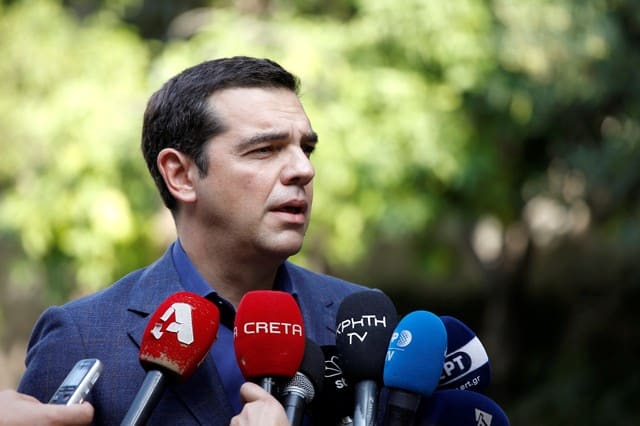 Greek lawmakers will start debating the confidence motion on Tuesday

Greek Prime Minister Alexis Tsipras on Saturday welcomed the approval by Macedonia’s parliament of a proposed change to the country’s name as a decisive step towards ending decades of discord between the two neighbours.

Macedonia’s parliament approved the proposed new name of Republic of North Macedonia on Friday after a referendum last month failed to reach the minimum participation threshold.

The move could unblock Macedonia’s bids to join NATO and the European Union, long blocked by Greece, which argues that “Macedonia” implied territorial claims to a Greek province of the same name.

The proposal still has to jump through further hoops of approval, including passage in Greece’s parliament despite the hostility of the Greek defence minister to be formally adopted.

“Today is a symbolic and historic day for our foreign policy after yesterday’s decision at the Skopje’s parliament which opens the way for the implementation of an historic accord,” Tsipras said at a ceremony to take charge of the foreign affairs portfolio.

He said implementation of the accord would also allow the small Balkan state to join international organisations, referring to the European Union and NATO.

Tsipras has taken on the foreign minister role after Nikos Kotzias, Greece’s main negotiator in talks that led to the deal, stepped down following a row with Defence Minister Panos Kammenos at a cabinet meeting on Tuesday.

Kammenos is head of the co-ruling right-wing Independent Greeks party, which with Tsipras’s leftist Syriza party has a slim majority in Greece’s parliament.

He has called the Macedonia deal a national sell-out and has threatened to resign if it comes before the Greek parliament.

In a long dispute with its neighbour, Greece has insisted on the name change because it views the name Macedonia as implying a territorial claim on a northern Greek region of the same name and an attempt to hijack ancient Greek civilization.

In announcing Kotzias’s resignation on Wednesday, Tsipras said he would no longer tolerate “double speak” among members of his cabinet, in a barb thought to be directed towards Kammenos.

In a Twitter post on Friday, Kammenos implied backhanders played a role in the Macedonian approval of the name change.

“Who would have thought that in Europe of values and democracy those who do not vote according to instructions are jailed, and those who comply get a 2 million euro bonus in black money,” he tweeted after the Macedonian parliament’s vote.

He did not elaborate and there has been no reaction to the comment from Tsipras or the Macedonian government.