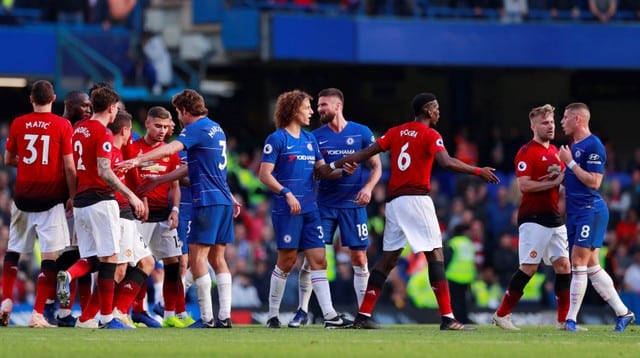 An injury time goal from substitute Ross Barkley earned Chelsea a last-gasp 2-2 draw at home to Manchester United in the Premier League on Saturday in a match that ended with United boss Jose Mourinho involved in scuffles.

Two goals from Anthony Martial had appeared to have earned Mourinho’s Manchester United a comeback win after they went 1-0 down in the first half.

United, who had never won nor even scored a goal under Mourinho at his former club, went behind in the 20th minute when Germany defender Toni Rudiger strode away from marker Paul Pogba and rose to head home a Willian corner.

Chelsea had most possession and looked in control until Martial thumped in the equaliser in the 55th minute against the run of play after Chelsea goalkeeper Kepa Arrizabalaga had kept out a close-range Juan Mata shot.

The goal galvanised the visitors and Martial made it two in the 73rd minute after a fine breakaway move between former Chelsea midfielder Mata and Marcus Rashford.

At the other end David De Gea was forced into fine diving saves from David Luiz and N’Golo Kante but was powerless as Barkley hammered home after Luiz’s header hit the post.

Mourinho, who won three titles with Chelsea, has been touted as the next Premier League managerial sacking after his side’s uncertain start to the season.

Events to inspire learning of German