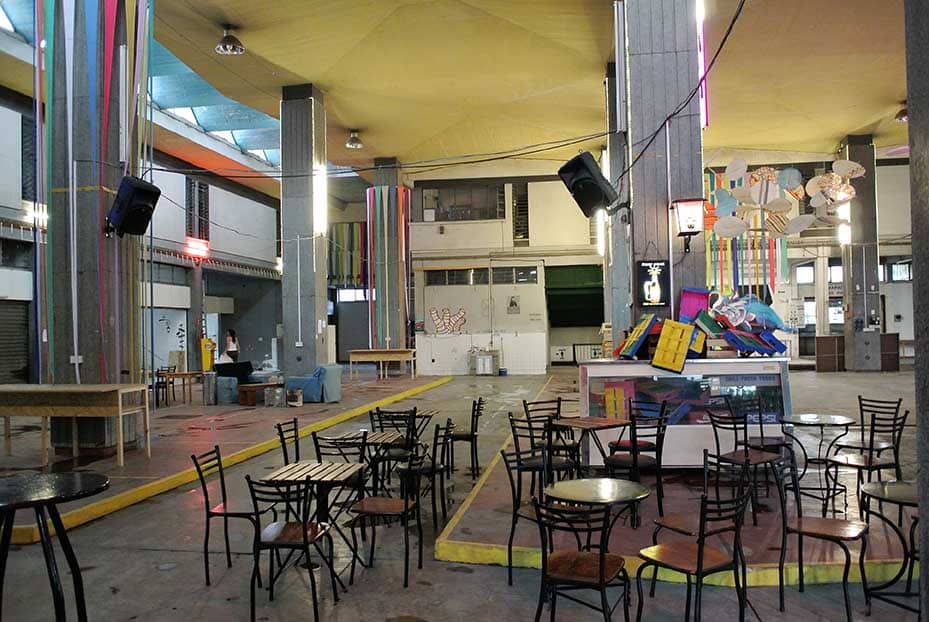 With fewer places for the young and the alternative to meet in Nicosia, the old market has provided a temporary reprieve

Walking past the old municipal market in the heart of Nicosia’s old town, an artist called Chloe Finn saw the doors of the previously abandoned building wide open.

She went in and found a man transforming one of the stalls from the once bustling market into a bar. He tells her the municipality is handing out the stalls for the next six months in an attempt to revive the building before it’s renovated to accommodate a new research centre, RISE.

She’d been looking for a studio space in the old town for a while, so she jumped at the opportunity, sent a proposal to the Nicosia municipality and now the tiled white walls of one of the stalls are filled with her artwork.

“Now we’re a group of around 30 people, all very different, with different interests and different world-views, each with their assigned stalls in which they use as they like but all sharing the common space which is the old market,” Chloe said.

A space like this was urgently needed, she said, especially in view of the seemingly unstoppable wave of gentrification taking over the old quarters of Nicosia, which has led to the exclusion of the vibrant youth cultures that used to fill the squares and other public spaces.

The first arrivals came in July, after word spread that plans for the renovation of the old municipal market which was set to begin at the beginning of the year were postponed until 2019. The firstcomers were faced with the daunting task of taking an abandoned public building, and, through their own initiative, giving it life and colour and opening it up to the public once more.

The old market stalls now host a variety of endeavours: an atelier, a stall dedicated to upcycling, another to a circular economy, a second hand and vintage clothing shop, a repair café for bikes, a recording studio, an arts and design stall, a jewellery and crafts shop, a stall where science will be taught to children in a fun way, a stall for the Arte Migrant initiative offering choreotherapy among other things, and, of course, a bar.

“It’s a modern market, in a way,” the upcycling expert, Alexandros Ioannou, said, “but it’s also a social experiment, not just for us making use of the stalls, but for the youth, the community, and for those who had experienced the market filled with life.”

Grey walls now showcase colourful graffiti art, decorations hang from columns and the roof, while cosy seating areas are spread across the large central common area and the doors are wide open for all.

“We want to create a common space and a common time, a place in the city where people can socialise without having to pay,” Chloe said.

“I realised that this space could also accommodate something we used to have a few years ago in old Nicosia and something that has become almost impossible today: a space for social interaction without the necessity of exchanging money too.”

An agora, in the ancient sense of the term, a place where people simply met and communicated. This is what we want for this space, she said.

A tribute to the bustling marketplace the building once hosted, a tribute to the subcultures that once filled the nearby squares before the cafes took them over – the temporary set-up in the old municipal market offers a breath of fresh air in the increasingly gentrified old quarters of Nicosia.

A developing city, but who for?

“When you’re developing a city, you need to think of all the people living in it. With the way in which Nicosia has developed there are those who will, of course, enjoy the way it has become, and the cafés in Phaneromeni square. But there are those communities who used to be there before and were evacuated to make space for this other kind of development,” Alexandros said.

“And if you don’t make an effort to include these people, then they will react in ways that bring elements into the city that you don’t want to see since it’s becoming clear that the city no longer makes everyone who uses it feel welcome” he added.

The urban landscape of within the walls Nicosia has been undergoing accelerated changes for the last half a dozen years, when the city’s commercial centre began shifting from Makariou Avenue and back into its historical home, the old city.

Today, that commercial centre is expanding to include the entire historic centre, at least on the south of the dividing line, through projects such as the new Town Hall, the development of Ermou street, the planned though stalled development of Lidinis street into a Creative Industry Quarter and the RISE research centre which will be hosted in the old municipal market.

The processes of gentrification have brought in a new life for consumer culture, but at the expense of other forms of urban life that inhabited the city beforehand, and that centred on the importance of public space rather than consumption.

Critics say the gentrification project in Nicosia has proven to be careless in terms of balancing private and public spaces, as epitomised by the “battle of the benches” in 2014.

Similar projects in urban spaces elsewhere usually mean an increased number of free places to sit. In Nicosia, it has meant the opposite. The first to disappear were some of the benches on Ledra street, then Onasagorou street and Phaneromeni square. The cafes came, demanded outside space, and most of the benches vanished. And so did many of the young who used to congregate in the area.

With the disappearance of spaces for public gathering, and most notably with the takeover of Phaneromeni square – once a hub for subcultures – by cafes, disenchanted and displaced groups searched for alternative locations.

“With how things have become, it’s not even about the events we’re going to hold in the market, but about getting people to gather, to communicate,” Chloe said.

“We’re all really desperate for a hub, where everyone has their own space to do things together but also separately,” said Miltos Michaelides. a musician setting up a recording studio in one of the stalls.

With only two more months to go for the old municipal market “experiment”, Miltos says that the aim is “to form strong bonds that could move beyond this specific space, to re-establish the importance of collective and cooperative coexistence”.

One such location was the square outside the old municipal market, perhaps the only square in the centre of the old city that has yet to be embellished with hip consumer spots, though these are surely on the way with the planned developments for the area.

Xenios Symeonides from the Nicosia Municipal Arts Centre (Nimac) and coordinator of the old municipal market project on behalf of the municipality, said that “we’re hoping that the central space in the market, as well as the square outside it, remains open to the public, even once the research centre opens, since we know how important this is for the community.

“Development projects and the public can co-exist, and we hope that they will,” he said.